People walk among anti-tank barriers placed to protect historic landmarks in expectation of a Russian assault on the strategic Black Sea port city on March 14, 2022 of Odessa, Ukraine.
Scott Peterson-Getty Images
Ideas
By Suriya Jayanti
Jayanti is an Eastern Europe energy policy expert. She served for ten years as a U.S. diplomat, including as the Energy Chief at the U.S. Embassy in Kyiv, Ukraine (2018-2020), and as international energy counsel at the U.S. Department of Commerce (2020-2021). She is currently the Managing Director of Eney, a U.S.-Ukrainian decarbonization company.

Farmers in Ukraine, the breadbasket of Europe, have run out of fuel. Two weeks into Russia’s assault on Ukraine supply chains are disrupted and a critical shortage of fuel for tractors and trucks is pushing Ukraine’s agricultural sector toward collapse. If it does not secure diesel soon, Europe could face massive price spikes for agricultural commodities and challenging food shortages.

As has been widely reported, Ukraine is a major agricultural powerhouse. Between 2018 and 2020, it produced 49.6% of global sunflower oil, 10% of global wheat, 12.6% of global barley, and 15.3% of global maize. Ukraine is also a top producer of eggs, potatoes, rye, other grains, and even cheese. For Europe, Ukraine in a given year is either the third or fourth biggest source of agricultural imports. According to Nazar Bobitski, head of Ukraine’s Business and Trade Association in Brussels, Ukraine supplies 88% of Europe’s sunflower oil, 41% of its rapeseed, and 26% of its honey. The Middle East even more at risk of food shortages due to Russia’s invasion of Ukraine. Lebanon, for example, gets over 80% of its wheat from Ukraine and has now banned the export of “foodstuffs” to protect itself.

What is not being widely reported is the degree to which the looming collapse of the Ukrainian agriculture sector is due to fuel shortages. Farmers need fuel, mostly diesel, to power their tractors, plows, combines, and delivery trucks. Now, with Russia scaring off diesel deliveries to Black Sea ports while Ukraine is forced to divert some of its fuel to military defense of the country, none is left for agriculture.

Taras Panasyuk, Commercial Director for West Oil Group (WOG), one of Ukraine’s top retail fuel companies, said the “situation is really very serious.” Planting season starts in a few weeks, but farmers do not have fuel to sow the fields and have no confidence that they will have fuel with which to harvest later in the year. An agricultural official who requested to remain unnamed was more explicit, “Our agricultural sector is getting completely f*cked.”

Ukraine’s agricultural sector consumes approximately 1.5 million tonnes of diesel in a normal year. To survive just the next two months, the peak planting months, Ukraine needs 200,000 tonnes or it will not be able to seed its fields. The country needs another 150,000 tonnes per month for commercial use, including for export supply chains and delivery. The agriculture official noted that these numbers are completely independent from military needs. WOG and its top rival in retail fuel supply, OKKO, report they will run out of diesel completely in the next couple of weeks and have already stopped supplying to agriculture except on prepaid contracts.

To be clear, Ukraine’s current diesel shortage is not due to sanctions on Russian oil and gas, nor will it be exacerbated by stricter sanctions. The global economic reawakening since COVID-19 receded had already disrupted supply chains, such that even Saudi Arabia is reportedly looking for diesel to import. Meanwhile, China, which has carefully not hindered Putin’s invasion, has ordered its state-owned petroleum companies to cease exports since the invasion.

Yes, markets are in turmoil because of uncertainty created by Russia’s invasion of Ukraine and the absolute imperative of breaking Russia’s energy dominance over Europe. But Ukraine cannot secure diesel for its agricultural sector and supply chains precisely because Russia’s arrogance about its energy dominance gave Putin a feeling of invincibility. Obviously, his logic involved a conviction that Europe is too dependent on Russian oil and natural gas for it to intervene.

The Russian military presence in the Black Sea is making it hard for Ukraine to find willing diesel and other fuel sellers. Before the war, most diesel came into Ukraine through Belarus and the Black Sea ports of Odesa, Mykolaiv, and Kherson. Now, Belarus is part of the assault, and Russia has taken control of Kherson and is laying waste to Mykolaiv. Even where there is no immediate fighting yet, such as Odesa, Russian war ships in the Black Sea have scared off suppliers. Just as Russian troops are blockading Mariupol so humanitarian aid cannot get it, Russia has made delivering fuel to Ukraine too dangerous for sellers, they have told Ukrainian counterparts.

Ukrainian agricultural fuel suppliers say they are ready to make a deal through traders in Europe. Numerous former market rivals have joined together to increase their purchasing power and have the logistics prepared for diesel deliveries to, for example, the Polish or Romanian ports of Gdansk and Constanca. Suppliers from elsewhere in Europe or the Americas could deliver there for Ukraine.

Or, just as easily, if not more easily, foreign governments could supply Ukraine with diesel. NATO could tap its Support and Procurement Organization (NSPO) network of more than 50,000 contracting firms to help Ukraine’s agricultural sector survive. Although countries with strategic oil reserves do not always, or often, include refined products such as diesel, some of them do. The U.S. could release some of its 1,000,000 barrels of diesel kept by the Northeast Home Heating Oil Reserve in Connecticut, New Jersey, and Massachusetts. Other countries also keep some diesel, but specific numbers are hard to find for stockpiled refined petroleum products versus crude oil.

Getting Ukraine diesel for its agricultural sector should be a priority over other uses and other countries. Food prices across the world are already at record highs, and wheat in particular is smashing records. Russia and Ukraine combined produce about 32% of global wheat, together constituting 12% of all global calories traded. With neither country exporting—Ukraine under siege and Russia under sanctions—the U.N. calculated a likely 20% increase in prices just from the invasion’s supply chain disruptions. If Ukraine’s farmers miss this planting season, too, already sky high prices for food will rise enough globally to trigger hunger in vulnerable populations all over the world and even more than the 8% inflation U.S. consumers are already facing. 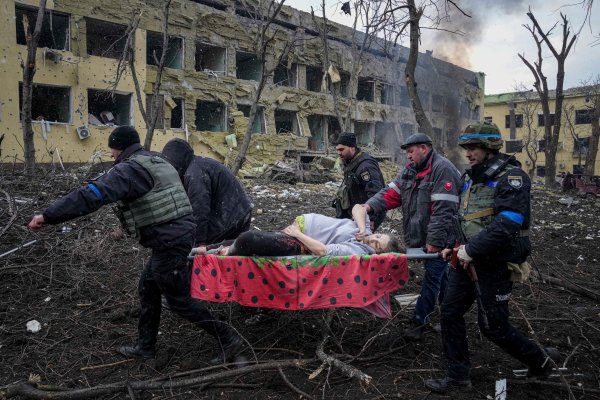