Ketanji Brown Jackson was confirmed by the U.S. Senate on Thursday, becoming the first Black woman Justice in the nation’s history.

Jackson was confirmed to the Supreme Court by a vote of 53-47 with bipartisan support. Republican Senators Mitt Romney of Utah, Susan Collins of Maine, and Lisa Murkowski of Alaska joined the Senate’s 50 Democrats to support her confirmation. Jackson is set to assume her position in retiring Justice Stephen Breyer’s seat next term, which begins in October.

“Judge Jackson’s confirmation will be a glass shattering achievement for America,” said Senator Dick Durbin, a Democrat from Illinois.

Jackson’s historic confirmation will not change the ideological makeup of the Supreme Court. She joins a bench with a 6-3 conservative majority—the smallest liberal minority in a generation. Former colleagues and mentors of Jackson’s tell TIME they expect she will strive to be in the majority with her colleagues whenever possible, seeking out compromise and consensus from the minority position.

Read More: What Ketanji Brown Jackson Could Bring to the Supreme Court

Jackson’s bipartisan confirmation is a win for President Joe Biden, after a contentious and at points inflammatory confirmation process. Jackson is the first Democratic appointee to the high court in 13 years, and she brings professional experience the bench otherwise lacks, including expertise on matters of criminal justice and sentencing disparities. Jackson, most recently a judge on the D.C. Circuit Court, will be the first former public defender to ever serve on the Supreme Court.

The high court could reshape major elements of American life in coming months with rulings on abortion access, gun rights, and religious liberty, and its reputation is at a crucial inflection point as it wrestles with increasing politicization. The court faces growing calls for changes to its makeup and operations, with progressives pushing to add seats to the bench or install judicial term limits. If changes to the staid institution are made, Jackson will likely be around to see them. At 51 years old, she is expected to serve in her lifetime position for decades.

Democrats’ narrow control of the Senate all but ensured Republicans could not block Jackson’s confirmation, and Senators in both parties publicly acknowledged she was qualified for the position. But her confirmation hearings were still heated—at times tinged with racial undertones—and the ugliness of the process helped sway at least two Republicans to vote for her.

Murkowski said Tuesday that her support of Jackson not only rests on the judge’s qualifications, but also on the “rejection of the corrosive politicization of the review process for Supreme Court nominees,” which she said “is growing worse and more detached from reality by the year.” Collins also commented on the “broken” Supreme Court nomination process in announcing she’d support Jackson, saying she has no doubt she will not agree with every vote Jackson casts. “That alone, however, is not disqualifying,” Collins said. In her view, she continued, the role of the Senate is to examine the experience, qualifications and integrity of a nominee—not determine how she will vote ideologically.

Supreme Court confirmations have become increasingly partisan in recent years. The last Democratic appointee, Justice Sonia Sotomayor, was approved by the Senate 68-31, with nine Republicans supporting her. Going further back, former Justices Ruth Bader Ginsburg and Antonin Scalia were confirmed 96-3 and 98-0, respectively. Yet with only three Republicans supporting her, Jackson’s confirmation was more bipartisan than the previous two: Amy Coney Barrett garnered no Democratic votes, and Brett Kavanaugh got support from one Democrat.

The partisanship in Congress did not seem to erode Jackson’s support among the public. A March 30 Marquette University Law School poll found that 66% of adults said that they supported Jackson’s nomination.

What to expect from Jackson

Jackson has earned a reputation as a meticulous judge who writes lengthy opinions and collaborates closely with her colleagues. Former mentors predict she will strive to vote with the majority. But, given the current makeup of the court, she may most often find herself in dissent.

Jackson will be in the ideological minority for the foreseeable future, and those who know her expect she’ll follow the model of Justice Breyer, for whom she once clerked. While some Justices try to shape ideology and mold schools of legal thought by writing stinging dissents, Breyer tried to vote with the majority whenever possible to influence the language of opinions and the ultimate outcome of the cases. In 2020, he said, “A dissent is a failure.”

Kenneth Feinberg, a close friend of Breyer’s whose law firm Jackson worked for from 2002 to 2004, says he believes Jackson learned from Breyer that “securing five votes is better than writing a lone dissent.” First Circuit Judge Bruce M. Selya, who Jackson clerked for in 1997, also says he does not believe Jackson has a “predilection to dissent.”

Jackson has acknowledged the power of writing dissents when necessary. During her confirmation hearing, Jackson said there have been many Justices before her that have used the “dissent mechanism” to describe their opinions in ways that “become persuasive to others in the future.”

Jackson will be joining the most hobbled liberal minority in a generation, says Melissa Murray, a law professor at NYU. The Supreme Court had a similarly skewed ideological balance during Reconstruction, and during that time, Justices in the minority such as John Marshall Harlan used their dissents to lay the groundwork for challenges to rulings they disagreed with generations later. “There’s something kind of ironic that Black women have finally achieved what is the pinnacle of success in the legal field, but it comes at a time when their voices may be particularly muted,” Murray says.

Murray predicts there could be an opportunity for Jackson to find consensus with conservative colleagues on criminal justice issues, where Justices Sotomayor and Neil Gorsuch have already built unusual coalitions. Jackson’s colleagues may recognize her expertise, and seek perspective when such questions come before the bench.

Jackson’s historic tenure on the nation’s highest court will begin next term, which will include consequential cases including two challenges to affirmative action in higher education. While Jackson will recuse herself from the case centering on Harvard, as she serves on the school’s Board of Overseers, she has not said she’ll recuse herself from a challenge to University of North Carolina’s policy. It could be the first case of many during her lifetime appointment in which she weighs in on some of the most critical questions before American society. And she’ll speak with a voice and perspective never before represented in the storied institution. 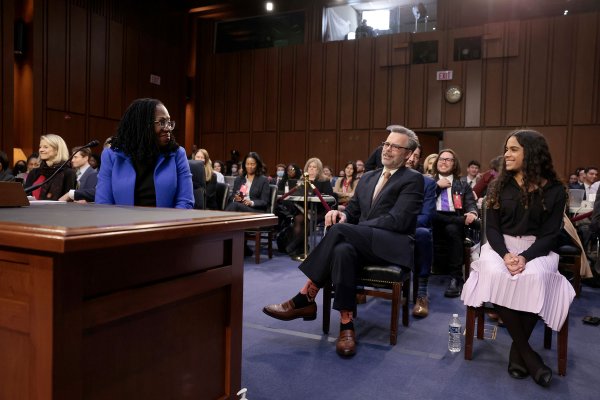 'Unconditional Love.' See Photos of How Ketanji Brown Jackson's Family Supported Her During Confirmation Hearings
Next Up: Editor's Pick