Behind The Scenes of President Biden’s Supreme Court Reform Commission

On Dec. 8 the Presidential Commission on SCOTUS submitted its much-anticipated final write-up to the President.
Getty Images
By Madeleine Carlisle

Some say bipartisanship in Washington is dead. But you wouldn’t know it listening to the final public meeting of the Presidential Commission on the Supreme Court on Dec. 7, during which all 34 commission members, including constitutional conservatives, liberals, and progressives, voted unanimously to submit their 294 page report on Supreme Court reform to President Joe Biden.

“The fact that we had really serious discussions, had wonderful testimony, and incredibly useful input from people across the country” was remarkable, Harvard Law School professor Laurence H. Tribe told TIME. “The result is a report that I think will be useful 100 years from now.”

The commission, formed in April by executive order, directed a bipartisan collection of legal experts to provide analysis of the “principal arguments” for and against—“including an appraisal of the merits and legality”—of various proposed reforms to the high court, such as changing the size and composition of the court or reducing its power in the constitutional system. On Dec. 8, more than seven months and six public meetings later, the commission submitted their much-anticipated final write-up to the President.

But the report, it turned out, made news mostly for its lack of news: the commissioners did not take a position on imposing term limits on justice or expanding the size of the bench, two of the top requests from progressives calling for reform amid a high stakes and highly politicized 2021-2022 SCOTUS term. Instead, the report reads more like a deeply researched pro-con list for major reforms, carefully critiquing each proposal and discussing how each might be legally implemented. (The report does more openly endorse smaller reforms such as a judicial code of ethics.)

TIME interviewed nine members of the commission. All expressed pride in the final report, describing it as a pivotal document that provides the first rigorous examination of the legality and feasibility of reform efforts that have been in the public discourse for years. They also praised their colleagues’ collegiality and respectful debate.

But some also expressed frustration at the exercise itself. At at time when distrust in institutions is high and the court appears posed to remake major elements of American society—including abortion access, gun rights and religious liberty—the toothless commission was convened as an exercise in bipartisan analysis, rather than an engine of transformative change.

“Ultimately, it looks like a policy report,” said one member, who spoke on condition of anonymity to be able to speak freely about the experience on the commission. “I’m not sure how useful it will be as a way of guiding and providing a path forward.”

The commission was never intended to offer recommendations, commissioners say. The co-chairs repeatedly told members that their mandate, per the executive order, was to provide analysis, not advice, one member told TIME. Commissioners say the 34-person body was broken down into five working groups, each of which was tasked with writing a different chapter. All of the debates and discussions amongst the full commission took place in public hearings.

The ideological makeup of the commission split roughly into three camps, according to two commissioners who spoke with TIME. The first was conservatives who felt major changes to the high court would be dangerous. The second, largest, group was made up of more moderate liberals who worried about looming attacks on American democracy, but argued that any radical reforms to the court in the current moment could weaken its legitimacy during a moment where institutions must be strengthened. A third, smaller group of progressives argued that the court’s legitimacy has already been mortally weakened and the best path forward is reform.

Read more: This Supreme Court Case Could Take a ‘Wrecking Ball’ to Separation of Church and State

“I was surprised by the amount of the deference to the status quo,” one commissioner tells TIME. “The idea that we shouldn’t try to improve things because it would destabilize the system, which I heard from liberals.”

While all nine commissioners who spoke to TIME said they believed the final report successfully accomplished the task the President had charged them with, two said they wished the mandate itself had been different. “If I were the elected official or the principal that was receiving this report, [I’d think] what do I do with this?” a commissioner told TIME. “But that, I think, is more the fault of the President and the Administration in terms of what they tasked this report to do.”

Another commissioner echoed that sentiment, having initially expected the commission to try and come up with answers. “But of course, we had a lot of different perspectives. So it was inevitable that we were not gonna reach any kind of consensus,” the commissioner says. “I think a lot of people have criticized this, and I can understand why they’re frustrated—people think there’s a crisis and we want to know what to do. And you’re not telling us what to do.”

The White House did not respond to TIME’s request for comment.

Earlier drafts of the report, released in October, suggested that the commission was poised to lean favorably towards term limits and away from court expansion. Ultimately, those draft sections were revised into more neutral stances. “Without taking a position on the merits of term limits,” the executive summary of final report reads, “the Chapter considers design questions that would have to be addressed were term limits to be adopted.”

Commissioner Caroline Fredrickson, a senior fellow at the Brennan Center for Justice who served as the president of the progressive American Constitution Society from 2009 to 2019, said commissioners debated over whether earlier drafts were too prescriptive. “I think there are people who got frustrated, ultimately, with the fact that it was a report of analysis and not a recommendation,” she told TIME.

Read More: Why the Gun Rights Case Before the Supreme Court Matters So Much

Several commissioners who spoke to TIME described the report as a historic document and the first in depth examination of potential court reforms—a wide-ranging analysis that would not have been possible if the commission were also tasked with agreeing on recommendations.

“I cannot remember the last time you had all this public commentary on how people saw the Supreme Court,” says commissioner Olatunde Johnson, a professor at Columbia Law School. For lawmakers who want to pursue reform efforts, the report “is very helpful in providing a set of arguments about the need for some of those reforms,” as well as potential steps for implementation, she adds.

Fredrickson gives “a lot of credit,” she says, to the Commission chairs, New York University Law professor Bob Bauer and Yale Law School professor Cristina Rodríguez, for “wrangl[ing] us all to come to a point where we voted unanimously.”

A vigorous debate and changed minds

The final report mentions “profound disagreement among Commissioners” on key issues, and several commissioners told TIME that they saw that disagreement mirrored in their own working groups. While each commissioner praised the collegial nature of debates, some confided that it could be an exasperating experience. As one commissioner put it, “[Serving] on a committee with people I totally disagree with and working with them for six months while I wanted to pull my hair out at times, was one of the most rewarding things that I’ve done in a long time.”

Two of the commission’s most conservative members, Harvard Law professor Jack Goldsmith and University of Virginia Law professor Caleb Nelson, resigned from the commission in October. Neither responded to TIME’s request to discuss their reasons for leaving.

Judge Thomas B. Griffith, who was nominated to the U.S. Court of Appeals for the D.C. Circuit by President George W. Bush and served from 2005 to 2020, says he was initially skeptical because of the relatively few members who might be described as moderate or conservative. “I was more than pleasantly surprised at the dynamics… ideas were vigorously debated, but amicably,” he says. Griffith came away convinced that expanding the court and enacting term limits would dangerously damage the institution, and feels his opinions are fairly reflected in the document.

Read more: Inside Mississippi’s Last Abortion Clinic—and the Biggest Fight for Abortion Rights in a Generation

Several commissioners said the process changed their opinions on major proposals. Richard H. Pildes, a professor at NYU School of Law, says he was surprised by the degree of support he saw across the political spectrum in public testimony supporting 18-year term limits for justices. The report is the first time a proposal for term limits was “really put under the microscope,” he said. Ultimately, he concluded they would not compromise judicial independence. Tribe, on the other hand, says he was swayed against term limits on the grounds that they would be difficult to implement. He concluded that court expansion is the best way forward, which he argues in a recent Washington Post op-ed with his co-commissioner U.S. District Court Judge Nancy Gertner.

Griffith says he came away with an even deeper respect for the current judicial system. “My hope is that when people read the report and study it, they’ll come away saying, the Supreme Court is not perfect. No human institution is perfect. But this is a pretty darn good one,” he tells TIME. “We ought to be really careful about tinkering with it because you just don’t know what the consequences could be,” adding that he believes court expansion could prove an existential threat to judicial independence.

The report’s intended audience is both the general public and the President himself. But what happens next is up to lawmakers. As the report clearly lays out, any major changes would likely at the least require an act of Congress, where reform efforts have yet to gain traction. “That’s something that those of us who deeply believe in reform have to grapple with. How do we go about doing this?” says Fredrickson. “How do we get it done in terms of building a political consensus?” 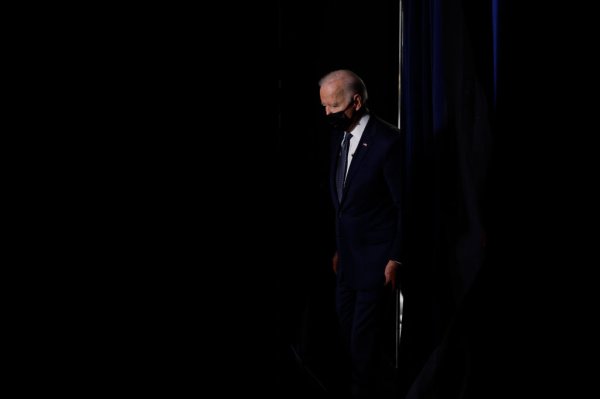 Biden’s Push to Strengthen Democracies Abroad Begins at Home
Next Up: Editor's Pick