A Realistic Plan for Peace for Ukraine and Russia

Destroyed buildings are seen as civilians are evacuated along humanitarian corridors from the Ukrainian city of Mariupol under the control of Russian military and pro-Russian separatists, on March 21, 2022.
Stringer-Anadolu Agency
Ideas
By Michael O'Hanlon
O’Hanlon holds the Philip H. Knight Chair in Defense and Strategy at the Brookings Institution; his latest book is The Art of War in an Age of Peace: U.S. Grand Strategy and Resolute Restraint.

As the tragic war in Ukraine has now driven roughly 10 million from their homes and killed many thousands, with no end in sight and no real prospect of near-term victory for either side, it is increasingly necessary to focus on a possible peace plan.

Ukraine and Russia will have to agree on specifics, and at this point it is very difficult to know what either side would accept, but this war involves us all in one way or another, and springs in part from a disagreement about whether Ukraine should ever be allowed into NATO. As such, the U.S. has a big stake in this issue, and the Biden Administration should play a major role in helping the parties conceptualize a possible compromise.

The essence of any deal would presumably be that Ukraine forgo its aspirations to join NATO, that the Ukrainian governments as well as NATO formalize that commitment, and that Russia agree to a ceasefire as well as withdrawal of its forces from Ukrainian territory. All parties would also formally commit to uphold and promote the security of a neutral Ukraine. NATO and the European Union would convey the resolute message that if Russia again attacked, all of our economic sanctions against Russia and military assistance to Ukraine would snap back on.

Beyond these general principles, a number of additional ideas might be considered

Territory. It is tolerable, and probably inevitable, that Russia will insist on holding onto the Crimean peninsula, given Crimea’s role in Russian history and its importance for the Russian Navy. However, we in the West are not obliged to recognize this annexation dating back to 2014. Ukraine should be allowed to keep the issue alive in the future with Moscow, if it so chooses, perhaps proposing various types of dual citizenship and guaranteed access within this choice real estate. By contrast, the Donbas regions of eastern Ukraine should be returned to Ukraine, given the naked and violent Russian aggression that has since 2014 victimized this region—though if Ukrainian President Volodymyr Zelensky were willing to modify borders in that region, we should not oppose the idea.

U.N. peacekeepers. To reduce the odds of renewed fighting, a U.N. monitoring mission (with troops from outside the Russia and NATO regions) could be deployed along whatever future borders are agreed upon. The Organization for Security and Cooperation in Europe should deploy monitors as well.

U.N. presence. Today, most U.N. agencies are home-based in New York, Italy, Switzerland, and Austria. The latter two countries are neutral, like Ukraine would itself remain in the future. Thus, it would be natural that some technical U.N. agencies (not security organizations per se) be moved to Ukraine in a demonstration of the confidence and commitment of the international community to Ukraine’s sovereignty and as a symbolic recognition of its enduring neutrality.

Rebuilding Ukraine. The international community will need to help Ukraine rebuild after the war. Ideally, if improbably, Russia should make at least a token contribution to this effort itself, as one of the key members of the U.N. and the Organization for Security and Cooperation in Europe. Its financial contribution should not however be couched as reparations, since that would make the idea a non-starter in Moscow. Russia itself should not be eligible for any financial assistance.

Ukraine’s future military and political system. Some Russians are insisting on a demilitarized Ukraine as part of any deal, as well as the end of the Zelensky government. The latter demand would be an unconscionable infringement on Ukraine’s sovereignty. The former is also unacceptable; it would only give Putin the prospect of easily resuming the war at a future time. Ukraine cannot be a threat to Russia, given its size, and Putin knows it, so any Russian demand to demilitarize Ukraine demonstrates bad faith. That said, Ukraine’s future military forces should resemble those of Finland or Switzerland or Sweden—with a modest active-duty force and a large reserve capability, primarily of infantry, that can resist any attack or attempt at occupation. This is not too different from Ukraine’s current defense posture, so the goal should be to avoid new constraints, not change the basic situation dramatically.

Military aid. The U.S. can and should commit as part of any deal to limit our own military aid to Ukraine to the scale and character that preceded the war—several hundred million dollars a year on average—rather than to the much greater flow that we have been providing in recent weeks since the conflict began.

Finland and Sweden. These two countries have long been proud of their neutrality, but Putin’s behavior has made them reconsider fundamentally whether they wish to join NATO, and a majority in each country now support the idea. Putin must accept that possibility; it is not his right to deny it, Finland and Sweden’s choice even as they continue to mull whether such membership would in fact be a good idea.

Sanctions. Even though most sanctions imposed recently on Russia would be relaxed, then lifted, under this deal, Putin will have to accept that many western businesses will not choose to return to Russia for years to come, and western governments cannot force them to return. Such is the natural consequence of his military aggression, and he will have to live with it for some time to come. Still, such a prospect is far better for him than the kind of economic pain that will ensue if the war continues. With a deal, Russia will be able to resume most energy trade and most access to the international financial system.

Perhaps China and the U.S., often at each other’s throats on the Ukraine issue and many others these days, can even collaborate on how to pursue and support this kind of peace process. President Xi Jinping may be best able to persuade Putin of the logic of this kind of approach—a framework that is ideal for no one, but the “least bad” of the realistic paths forward for most.

There is little further time to waste, before what is already a horribly tragic war becomes absolutely catastrophic. 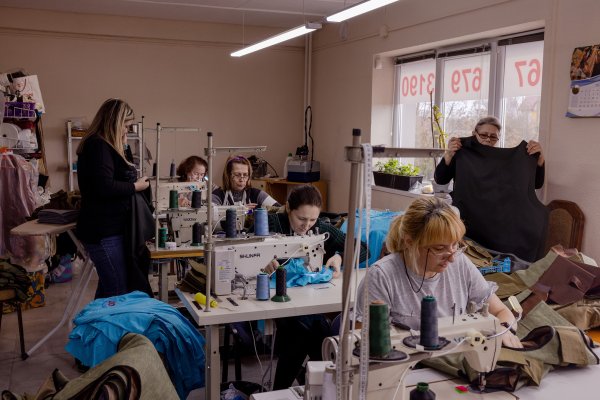 Women in Ukraine Play a Critical Role in the Fight Against Russia
Next Up: Editor's Pick