President Biden has decided to ban Russian energy imports to the U.S. in an effort to further choke off American cash going to Moscow as Russian President Vladimir Putin presses ahead with his unprovoked invasion of Ukraine. “The United States is targeting a main artery of Russia’s economy,” Biden said Tuesday, speaking to reporters in the Roosevelt Room across the hall from the Oval Office. “We are banning imports of Russian oil and gas.” Biden also moved to block U.S. citizens from making new investments in the Russian energy sector.

Weeks of banking and trade sanctions imposed by European countries and the U.S. have hurt the Russian economy in a number of areas. Credit card companies like Visa, MasterCard and American Express have suspended service in Russia. Ford, Nike and Apple have paused their Russian operations. Biden Administration officials hope a harsh oil ban will change Putin’s calculations of the cost of war and bring internal pressure in Russia to end the attack on Ukraine.

So far, however, the penalties have not convinced Putin to turn his forces around and Biden seemed to acknowledge Tuesday that Putin is showing few signs of being deterred. “Putin seems determined to continue on his murderous path no matter the cost,” Biden said.

Biden was initially reluctant to ban U.S. imports of Russian oil over concerns that it would constrain the global supply of energy and that U.S. consumers would pay higher prices for everything from auto fuel to heating and electricity. He wanted to act in concert with European allies, but European partners are more heavily reliant on Russian oil purchases for their local energy needs and have hesitated to sign on to a full ban of Russian oil imports. “This is a step we are taking to inflict further pain on Putin, but there will be cost as well here in the United States,” Biden said.

The war in Ukraine gave Biden a political opportunity to blame Putin for gas prices that were already going up before Russia invaded. Oil prices have jumped more than 50% since the beginning of the year, and are expected to increase further, contributing to the ongoing increase in prices. Last week, Biden announced he was releasing 30 million barrels of oil from strategic reserves, but that is unlikely to have much of an impact on near-term prices. “Putin’s war is already hurting American families at the gas pump,” Biden said.

In recent days, political pressure has mounted on Biden to move forward with a ban on Russian energy. “Republicans and Democrats alike have been clear that we must do this,” Biden said on Tuesday. Biden was also in danger of being outpaced by Congress to take action. Earlier this week, Democrats in Congress took steps toward legislation that would ban Russian energy supplies. House Speaker Nancy Pelosi sent a note to House Democrats on Sunday that said the House is exploring “strong legislation that will further isolate Russia” and that would include a ban on Russian energy products, ending normal trade relations with Russia and Belarus, and moving to block Russia from the World Trade Organization.

In addition to demanding a ban on Russian oil, some Republicans have called for Biden to increase domestic energy production and speed up the approval of new drilling leases on federal lands, which Biden halted when he came to office. White House Press Secretary Jen Psaki told reporters on Monday that the U.S. is producing oil at “record numbers” and that there are currently 9,000 approved drilling permits not being used. “The suggestion that we are not allowing companies to drill is inaccurate,” Psaki said, adding that the Biden administration wants to take a long term approach to investing in energy production that doesn’t rely on oil. Only 10% of onshore oil leases are on federal lands, and new leases often take years before they are producing oil.

The Biden Administration has worked in recent weeks to find more energy supplies that would help offset a decline in Russian oil sales. Biden sent a delegation to Venezuela over the weekend to discuss “energy security” with the government of Nicolás Maduro, as well as the welfare of U.S. citizens held there, Psaki said Monday. The U.S. sanctioned Venezuelan oil imports in 2019, and easing those sanctions to boost Venezuelan oil sales could help replace a decline in Russian energy imports. In mid-February, a week before Russian tanks rolled into Ukraine, State Department Special Envoy for Energy Affairs Amos Hochstein and the National Security Council’s Coordinator for the Middle East and North Africa Brett McGurk both traveled to Saudi Arabia to talk about ways the kingdom could help manage energy market pressures resulting from a war in Ukraine. It’s unclear if those talks have delivered the increase in global supply the Biden White House wanted.

In the longer term, Biden argues that investing in cleaner sources of energy is a better geopolitical move. Biden used the moment on Tuesday to make a pitch for funding his initiatives to build a robust new energy sector in the U.S. to produce more alternatives to fossil fuels, like wind and solar power, and to reduce the global reliance on oil. “To protect our economy over the long term we have to become energy independent,” Biden said. “It should motivate us to accelerate the transition to clean energy,” he said. 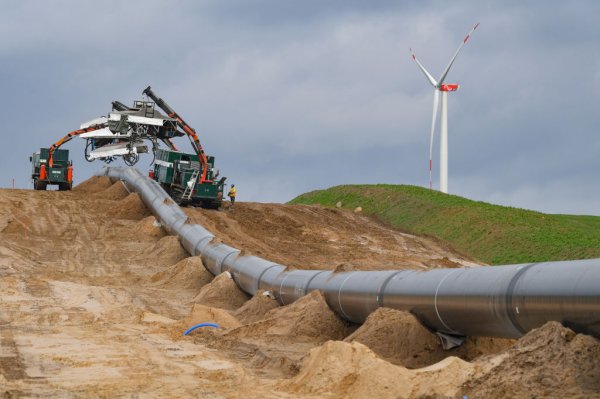