A view of destruction in the city of Kharkiv after Russian attacks on Ukraine on March 14, 2022.
Wolfgang Schwan—Anadolu Agency/Getty Images
Ideas
By James Stavridis
Admiral Stavridis (Ret.), a TIME Contributing Editor, was the 16th Supreme Allied Commander at NATO and is Vice Chair, Global Affairs at The Carlyle Group and Chair of the Board of the Rockefeller Foundation. He is the co-author of 2034: A Novel of the Next World War. His new nonfiction book is To Risk It All: Nine Conflicts and the Crucible of Decision

As the Russian ground advance in Ukraine begins to gain a bit more momentum and encircle Kyiv, the West must consider its options. Despite the heroic efforts of the Ukrainians, facilitated by a deluge of weapons from NATO countries, “quantity has a quality all its own,” and the Russians continue to throw massive levels of bombing, long range missiles, and troops at the Ukrainian military and civilian population. The Ukrainians will fight with all their hearts—after all, it is their children, parents, and spouses they are defending. The question for the west is: what more must we be doing? And how quickly can we get assistance on line? Clearly time is of the essence.

There is no set playbook—the Russians burned that up on day one. Vladimir Putin has invaded a neighboring sovereign state without any provocation, warning, or a formal declaration of war. The Russian war machine conducts daily violations of the laws of war and the Geneva Conventions which guide combat operations: artillery and mortar attacks on civilian populations, strikes against medical facilities, starvation and deprivation of critical necessities of life to civilians, and an attack on a nuclear power plant.

With the reported pending addition of notorious Syrian and Chechen units to the mix, you can count on adding widespread looting, mass rapes, organized plunder, and sack of besieged cities to the list. The presence of Chechen leader Ramzan Kadyrov, a serial violator of every standard of conduct in a war zone, is especially ominous. The video images that will inevitably emerge from the weeks ahead will be excruciating to watch.

Putin has fundamentally broken international law. As a result, the niceties of legal opinion about the responsibilities of “co-belligerents” and “neutral powers” carry far less weight under the circumstances. For Washington and our allies, we need to think not of “on and off” switches in which we do nothing but watch (off) or we go nose to nose with the Russians with boots on the ground and jets in the air (on). We need to think of our options as a rheostat we have to dial in, and the direction of the dial at the moment points us toward taking more risk with our choices.

Read More: How the Ukraine War Could End

First, we need to increase the level of intelligence we are providing, ensuring it is of true tactical value and arrives in real time. The entire capability of the “unblinking eye” of U.S. intelligence should be essentially placed at the service of the Ukrainians so they know Russian tank movements and maintenance sites, daily intentions for aircraft flights, logistic hubs, fuel depot locations, on and on. We need to give the Ukrainians the kind of target lists I held during the air war in Libya as NATO commander.

Second, the Ukrainians need cyber protection and overwatch. Cyber is the “bear that hasn’t growled yet,” perhaps because Putin doesn’t want us to see his specific capabilities. Or perhaps their military offensive cyber capability is not as fearsome as we thought, similarly to their underperforming army. Either way, the Ukrainians will need to protect command and control networks so they can stay in the fight as it moves to the west and their networks likely come under attack.

Ukrainian servicemen walk on a makeshift pathway to cross a river next to a destroyed bridge near the city of Irpin, northwest of Kyiv, on March 13, 2022.
Aris Messinis—AFP/Getty Images

Third, the most complicated decisions will come in terms of creating a “no fly zone.” Unlike Libya, where Qaddafi had no nuclear weapons, with Russia we must consider the risks of combat between the U.S.-NATO and Russia escalating after a miscalculation between the forces. The obvious solution is to provide Ukraine with the sensors and weapons they need (and can reasonably be expected to handle) to create such a zone rather than sending U.S.-NATO assets into combat.

To that end, we need to provide sensors that are survivable and somewhat portable. They should be able to network with the U.S. intelligence we are providing from our own systems, including overhead satellites, NATO AWACS aircraft (operating well behind NATO borders but overseeing the Ukrainian battlespace), drones, and fixed systems that are easy and simple to operation. The Ukrainians need 24/7 understanding of what is in the air overhead. We should work hard to get more drones, both our own and those made by other nations, like Turkey, into their hands immediately.

Read More: How Russia Is Beating the West at Deterence

They need to be able to reach out and interdict Russian aircraft that intrude into Ukrainian airspace. This begins with the Stinger missiles which have been provided in great numbers, but they will need additional higher-altitude systems. There are plenty of candidate systems, including former Soviet-Russian weapons that are still operated by NATO members from the eastern portion of the Alliance, like the S-300 SAMS. The Israeli Iron Dome system that shoots down incoming missiles could be useful to protect civilian populations and should be considered, although training and set up will be somewhat time consuming. The Pentagon should do a world-wide review of both offensive and defensive surface-to-air systems and move with alacrity to get them into the hands of Ukrainians. If training is needed, bring the Ukrainians to Ramstein Air Force base in Germany or another NATO base and do the training before turning over the systems.

Finally, we come to the controversial idea of providing combat aircraft. The U.S. and Poland appeared to have constructed a way to get the relatively simple-to-operate MIG-29 fighters into Ukrainian hands, but when Poland insisted they flow through U.S.-NATO channels, the U.S. backed away. We should continue to pursue this idea. It would provide a concrete morale boost to the Ukrainians, like the lend-lease destroyers of WWII; add a modicum of combat power to the airspace; and send a signal to Putin that we are not going to back down.

Alongside the aviation materials, there are plenty of ground systems that should continue to flow into Ukraine—Javelins, TOWs, small arms ammunition, sniper systems, heavy machine guns, rocket propelled grenades—all of that seems to be moving swiftly and we must keep the pace up. All of this must get into Ukrainian hands in days, not long weeks and months. We are in a logistic race with Russia, and it is one we can and must win.

Is all of that that provocative? Sure, but less so than dialing the rheostat all the way to full combat operations by U.S.-NATO troops on the ground and our pilots in the air. It is Putin who started this entirely unnecessary war, and we must not be afraid to take reasonable steps to oppose him. The west has plenty of options to confront him, and we should consider the full range, especially in limiting Russian control of Ukrainian airspace and continuing to arm the Ukrainians for the hard ground battles ahead. 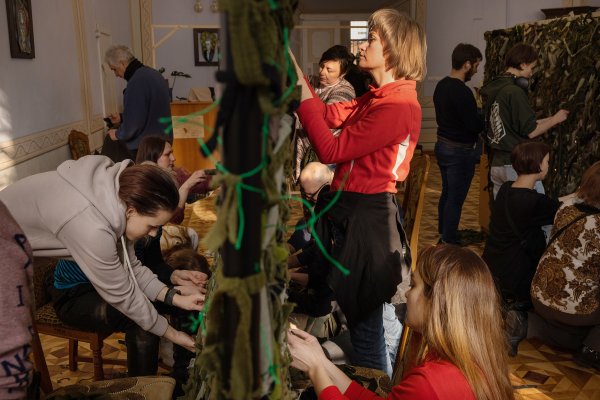 How Ukrainian Citizens Are Mobilizing Against Russia
Next Up: Editor's Pick