A Wave of Ukrainians and Russians at the U.S.-Mexico Border Puts Pressure on Biden's Immigration Restrictions

A Ukrainian woman, Sofiia, and her three children were finally allowed to cross the United States-Mexico border near Tijuana on the morning of March 11. It was their third attempt to seek asylum in the U.S.

The border agents that had denied Sophiia and her children had cited Title 42, an obscure and controversial public health rule that allows U.S. officials to circumvent the normal trappings of immigration procedure, including asylum interviews. Lawyers with the Center for Gender and Refugee Studies at UC Hastings eventually helped clear their way.

Migrant advocates say Sofiia and her family’s struggle has directed a spotlight on the Biden Administration’s embrace of Title 42, which has been the subject of an ongoing lawsuit against the U.S., at a time when a growing number of Ukrainians and Russians are attempting to request asylum.

According to a TIME analysis of CBP data, the number of encounters between U.S. border agents and Ukrainians and Russians at the U.S.-Mexico border increased 753% between FY2020 and 2021. In FY22 so far, the number of Ukrainians and Russians encountered at the border has already surpassed the previous two years, with the most significant uptick happening in the last six months, as Russia’s threats against Ukraine increased. The number of Ukrainians at the U.S-Mexico border increased slightly in February, according to CBP data. Border officials encountered Ukrainians 272 times at the southern border, up from the 248 encounters in January. The number of Russian encounters decreased from 1,030 to 769 over the same period.

A surge of Russians and Ukrainians at U.S. borders

It has been a grueling two weeks for Sophiia and her family. Around Feb. 27, days after Russia launched its military invasion of Ukraine, Sofiia and her children fled their home, drove to Moldova, then Romania, and then flew to Mexico City. Immigration experts say it’s likely she chose this pathway because most Ukrainian passport holders don’t need a visa to arrive in Mexico by plane; a visa is required to arrive in the U.S. From Mexico City, Sofiia and her kids drove to Tijuana, hoping to cross into the U.S. to stay with family members in California while they awaited their asylum hearing. The desperate family, which had been denied twice, was awaited by crowd of reporters when they crossed onto U.S. soil.

Since Feb. 24, when Russia began its invasion, the UN’s refugee agency (UNHCR) estimates that 2.5 million people have fled Ukraine into neighboring countries. “UNHCR considers all people fleeing Ukraine as refugees who should be granted safety,” Kevin Keen, a communications officer at UNHCR, tells TIME in a statement. “We call on all countries to allow civilians of all nationalities fleeing Ukraine non-discriminatory access to their territories and to ensure respect for the principle of non-refoulement.” UNHCR does not currently have data on how many of those fleeing Ukraine have landed in Mexico.

Anecdotal evidence points to an uptick of Ukrainian and Russian migrants at the U.S.-Mexico border since the start of the war. The San Diego Rapid Response Network’s Migrant Shelter Services, which operates a shelter for people who have just crossed the U.S.-Mexico border, says that during the week of Feb. 21-27, it aided 259 people, most of whom were Cubans, Russians, and Ukrainians.

Immigration attorney Taylor Levy, who helps other lawyers navigate Title 42, also tells TIME that in the last two weeks she has fielded dozens of calls from colleagues asking if their Ukrainian and Russian clients can feasibly make their way to the U.S. by way of the Mexican border, or what to do if their client is already in Mexico. “I’ve definitely mentored other attorneys on Ukrainian and Russian cases for months now,” Levy says. “But it’s been particularly busy in the…days since the war started.”

On Thursday, an American man told ABC affiliate 10 News San Diego that he and his wife had fled Ukraine, attempting to enter the U.S. through Tijuana; he said his Ukrainian wife had been detained by border officials.

Read more: Some Argue the U.S. Should Offer Refuge to Russian Troops Who Defect. Could It Even Work?

Ukrainians and Russians have been arriving at the U.S.-Mexico border since at least 2014, says Jessica Bolter, associate policy analyst at the Migration Policy Institute (MPI), a nonpartisan research institution, although the numbers have always been relatively low, compared to other nationalities, such as Salvadorans, Guatemalans and Hondurans. Between FY2019 and now, Ukrainians and Russians have each averaged about 1% of CBP encounters, CBP tells TIME in a statement. In December, U.S. border agents reported more than 4,500 encounters with Russians and Ukrainians at the borders with both U.S. and Canada in December, and more than 3,700 in January.

Many European countries, including the ones neighboring Ukraine, have opened their doors to fleeing Ukrainians. Canada also announced March 10 that it would accept an unlimited number of Ukrainians to the country. Sofiia told reporters she and her family attempted to enter the U.S. because her family members, and the support they can provide, are there.

Title 42 in the spotlight

On March 4, a district court ruled that the Biden Administration could continue expelling families under Title 42, but couldn’t expel them to countries where they feared persecution. The government, however, has 52 days since the ruling to decide its next step—it could decide to abide by the court ruling, appeal, or do away with Title 42 altogether.

While Sofiia and her family were initially denied entry under Title 42, they are an exception, immigration experts say. For the most part, Russian and Ukrainian migrants have been exempted from Title 42, likely because the U.S. does not have the resources to return Russians or Ukrainians to those countries, Bolter says.

While Mexico has agreed to accept its own nationals, as well as Hondurans, Salvadorans and Guatemalans, other nationalities, including Haitians and Nicaraguans, are typically returned to their home countries. Russians and Ukrainians, as well as people from India and China and a few other nationalities are often exempted from Title 42 at much higher rates than others. “It’s likely that there is not sufficient coordination between the U.S. government and those other governments to make expulsions worthwhile,” Bolter says.

The uptick in Russians attempting to cross by land into the U.S. may be related to the annexation as well. People who have been politically persecuted because of their criticism of the Putin regime, or those fleeing other types of persecution—because of their religion or sexual orientation, for example—may not see safe havens in neighboring Eastern European countries, several of which have seen the rise of anti-migrant and rightwing political parties.

Europe is also simply geographically closer, which may feel more dangerous. “There certainly have been instances of the Russian government following dissidents through Europe and still being able to get to them through Europe,” Bolter says. “They might feel safer coming to coming to Mexico and the U.S.” In September, the European Court of Human Rights found that the Kremlin was responsible for the death of former Russian official Alexander Litvinenko, who was poisoned in 2006.

Read more: After Fleeing Ukraine, LGBTQ Refugees Search for Safety in Countries Hostile to Their Rights

But attempting to immigrate to the U.S. via Mexico also comes with extreme risks, Levy cautions. Migrants, including Eastern Europeans, traveling via Mexico are often targets of organized crime. Levy has also known Eastern Europeans who were extorted by Mexican officials. While migrants who come from Europe tend to have more resources, and therefore may succeed in driving through a port of entry—driving increases their odds of touching U.S. soil and making an asylum claim—Levy warns against the attempt. In December two vehicles transporting 18 Russians, including children, were shot at by a border agent after the drivers attempted to speed past the port of entry to San Diego. While none were struck with bullets, two people suffered minor head injuries, according to CBP. 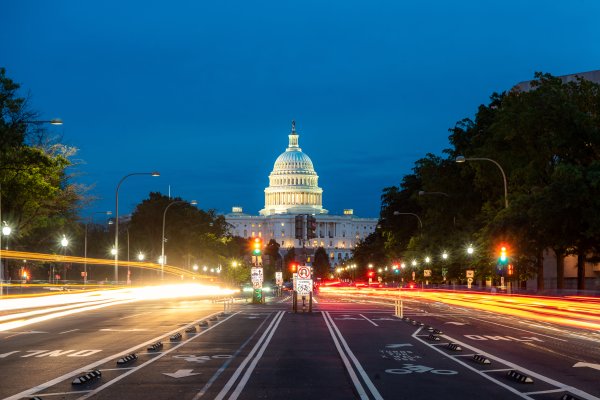 What's in the Omnibus Spending Bill Passed by Congress?
Next Up: Editor's Pick