Why Kamala Harris' Trip to Honduras Is Really About the U.S.-Mexico Border

US Vice President Kamala Harris (C) walks off a helicopter to board Air Force Two for a trip to Honduras to attend the inauguration ceremony for Honduran President-elect Xiomara Castro, at Joint Base Andrews in Maryland early on January 27, 2022.
Erin Schaff—AFP/Getty Images
By Jasmine Aguilera

Vice President Kamala Harris arrived in Honduras on Thursday to attend the inauguration of Xiomara Castro, the country’s new president who the White House hopes will be part of its fight against the “root causes” of migration that have spurred millions of people from Central America to flee to the U.S. for decades.

For years, multiple U.S. administrations have poured billions of dollars into Honduras, El Salvador and Guatemala—the so-called Northern Triangle region—to battle corruption, improve law and order, create jobs, and, ultimately, reduce migration to America’s southern border. The funding, however, has had little measurable impact, experts say, due in large part to a lack of well-placed, long-term investment and the endemic corruption that has destabilized all three countries.

But the Biden Administration hopes Castro’s election could herald a turning point, at least in Honduras. Castro ran a historic campaign on an anti-corruption platform, and has said she is willing to work with Washington to address the issues that have led to hundreds of thousands of Hondurans to leave home for years: high poverty, violence and climate change, all worsened by the belief that elected officials are interested less in working for Hondurans than lining their own pockets.

“Poverty doesn’t necessarily lead to immigration. Poverty without hope, and with insecurity and fear, is what’s driving migration from the Northern Triangle,” says Charles Call, associate professor of International Peace and Conflict Resolution at American University. “Bad governance is at the core of the inability to create hope and security.”

Harris, who was tapped by President Joe Biden to lead the Administration’s root causes effort, traveled to Honduras with a delegation of members of Congress, the United States Agency for International Development (USAID), the State Department and the U.S. Embassy in the Honduran capital, Tegucigalpa. The Vice President plans to meet with Castro after her inauguration on Thursday to talk about promoting economic growth, combating corruption and managing migration, according to senior Administration officials who briefed the press prior to Harris’s trip.

The Biden Administration committed early on to tackling the root causes of migration from Northern Triangle countries, proposing a $4 billion four-year plan in an immigration bill. The bill was introduced in Congress and the Senate in February 2021 by Rep. Linda Sánchez and Sen. Bob Menendez, but there has so far not been any movement on it. As of last summer, the White House had allocated $250 million to address the more immediate humanitarian needs of the three countries, including disaster relief after hurricanes Iota and Eta and pandemic-related aid and more than 10 million doses of the COVID-19 vaccine.

The White House has also called on the private sector to step up investment in Central America, and as of Dec. 13 had rallied up to $1.2 billion in commitments from companies like Mastercard, PepsiCo, Nespresso, Microsoft, and more. But it will require stable government to ensure those investments benefit the Central American people, says Ariel Ruiz Soto, a policy analyst at the Migration Policy Institute (MPI), a nonpartisan research institution. For example, he says, the government may have to lead the way on infrastructural changes before Microsoft could build a plant.

Read more: ‘This Is For My Son’s Life, My Wife’s Life.’ The Migration Journey to the U.S. Continues Despite Complicated Border Policy

Harris’s first foreign trip as Vice President was to Guatemala in June 2021 to begin working on partnerships with the country’s leaders. She also met with Mexican President Andrés Manuel López Obrador. But the trip was overshadowed by statements she made at a press conference in Guatemala, addressing the Guatemalan people directly in saying “do not come” to the U.S. The backlash was swift from both sides of the aisle: on the left, she was accused of being out of touch with the harsh realities migrants face, and on the right she was criticized for not having paid a visit to the U.S.-Mexico border itself.

Migration from the Northern Triangle countries, meanwhile, has not slowed down. There was a sharp increase in apprehensions of people from El Salvador, Guatemala and Honduras at the U.S.-Mexico border at the start of the Biden Administration, and by March 2021, that number spiked to more than 85,600, according to data from U.S. Customs and Border Protection. After a dip in May, apprehensions of people from the Northern Triangle region increased again to about 94,400 in July.

It will take time—likely a decade—before the White House begins to see results of these programs, says Call, who worked in the State Department during the Obama Administration. That Administration also attempted to address root causes of migration, but only began allocating funds toward the end of former President Barack Obama’s second term. When former President Donald Trump came into office, those resources were cut back significantly.

Lasting success can only happen in the “context of good governance,” Call says. “It doesn’t make any difference if you get $4 billion to governments that are all corrupt, and they spend it on houses in Miami, and big ranches and airplanes.”

Xiomara Castro (R), the newly inaugurated president of Honduras, gestures during a press conference on November 28, 2021 in Tegucigalpa, Honduras.
Photo by APHOTOGRAFIA/Getty Images

‘Somebody we can work with’

Castro’s meeting with Harris will be the new president’s first with a foreign official, though the two have spoken once before on a Dec. 10 phone call to discuss addressing root causes of migration and corruption in Honduras.

Castro’s predecessor, Juan Orlando Hernández, has been accused by U.S. prosecutors of having ties to narco trafficking. Hernández’s brother, Juan Antonio Hernández is currently on trial in the Southern District of New York where prosecutors have accused the former Honduran president of collaborating with his brother in his alleged drug trafficking efforts.

In Guatemala, elected officials have also been accused by critics of corruption and taking steps to ensure impunity, including ending the International Commission against Impunity in Guatemala, an independent United Nations body of investigators formed to put a check on corruption in the country. In El Salvador, President Nayib Bukele spent much of 2021 pushing his Administration further and further toward authoritarianism, by removing and replacing Supreme Court judges and the nation’s Attorney General with his own backers, a move that is against Salvadoran law.

“The important thing about Xiomara Castro’s election, is that, oh my gosh, now we have somebody we can work with,” says Call. “There was great enthusiasm inside the Biden Administration.”

Ruiz Soto says Castro’s nation-wide support gives her an upper-hand in her efforts to combat corruption. She isn’t only targeting leaders in metropolitan regions, but in the rural parts of the country where, at least as of 2015, 45% of the country’s population lived, according to the International Fund for Agricultural Development.

“Time will tell, ultimately, how this relationship will will develop,” Ruiz Soto says, “but I think there’s a lot of promise between the Biden Administration and Xiomara Castro in this case.”

But progress won’t be easy. Castro’s pledge to clean house in Honduras’ government is already meeting resistance in the country’s Congress. Members of her own Libre party formed a coalition with the conservative party on Jan. 21 that could block any effort by Castro to appoint a Congressional leader she chooses. “There’s already road bumps on the path to try to adopt new laws that will create good governance in Honduras,” Call says, and this happened before she even took office. 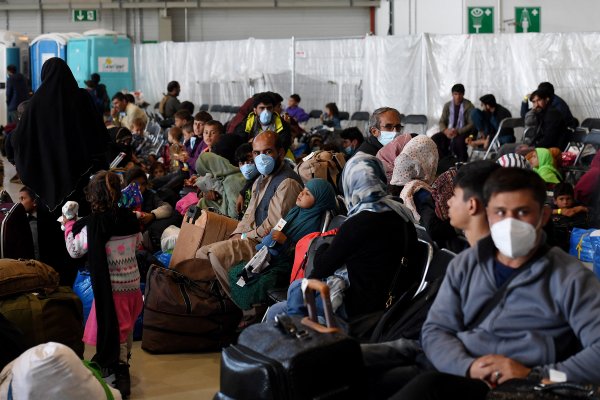 Fleeing Afghans Are Stuck in U.S. Immigration Bureaucracy
Next Up: Editor's Pick