Asylum-seeking migrants gather at a makeshift camp on the Mexican side of the San Ysidro Port of Entry on July 20, 2021 in Tijuana, Mexico.
Mario Tama/Getty Images
By Jasmine Aguilera

Despite sharp criticism from top officials and allies within the Democratic Party, President Biden is continuing to expel hundreds of thousands of migrants arriving at the United States-Mexico border, using a specialized public health order that allows officials to circumvent the normal trappings of immigration procedure, including asylum interviews.

The Biden Administration is defending its controversial use of the order, called Title 42, arguing in court that summary expulsions are “necessary,” due to “the ongoing risks of transmission and spread of COVID-19.”

But a growing cacophony of top public health experts are calling foul.

There’s no evidence that a policy allowing for mass expulsions prevents the spread of COVID-19, they argue. And it may, in fact, have the opposite effect: by rounding up and detaining hundreds of thousands of migrants in large groups, Customs and Border Protection (CBP), which does not offer COVID-19 testing for migrants, may actually be stoking the transmission of the disease. Migrants often spend days and weeks in crowded facilities before they’re transported and expelled.

“The Title 42 order fuels the pandemic,” says Julia Koehler, Assistant Professor of Pediatrics at Harvard Medical School and a pediatric infectious disease specialist. “It does not promote public health. It is opposing public health.”

Top Biden Administration officials also appear to be distancing themselves from the policy. Speaking at the Global Security Forum on Tuesday, Department of Homeland Security (DHS) Secretary Alejandro Mayorkas said Title 42 “is not an immigration policy that we in this administration would embrace, but we view it as a public health imperative as the Centers for Disease Control has so ordered.”

An unprecedented use of Title 42

ACLU, Texas Civil Rights Project, RAICES, the Center for Gender & Refugee Studies and Oxfam America have brought a class action lawsuit before the U.S. District Court for the District of Columbia, arguing that the Biden Administration’s use of Title 42 is in violation of federal immigration law because it bars asylum seekers from the right to seek protections in the U.S.

The Biden Administration defends its embrace of Title 42 as a public health measure, governed by the U.S. Centers for Disease Control and Prevention (CDC), rather than an immigration measure.

“Title 42 is a public health authority, not an immigration authority, and its continued use is thus dictated by the CDC,” the agency said in an Oct. 4 public statement. “[The Department of Homeland Security] will continue to defer to public health experts on decisions related to Title 42 while continuing to develop safe, legal, and orderly pathways for migration.”

Koehler and Monette Zard, the director of the Program on Forced Migration and Health at Columbia University’s School of Public Health, say that argument is flawed. Because the Biden Administration altered Title 42 to exempt unaccompanied migrant children and some family units, it is now an immigration policy masquerading as a public health policy.

“There are hundreds of thousands of other travelers crossing every single day that are not subject to any kind of public health measure,” Zard says. “The danger with Title 42 is it creates and feeds the rhetoric which suggests that migrants are the vectors here, and there is really no evidence to suggest that and it’s unlikely that that’s the case.”

Read More: The Biden Administration Promised ‘Immediate’ Aid to Haitian Deportees. It Has Yet to Arrive

The order has never been used in this way before, nor was it intended as an immigration tool, says Stanford Law professor Lucas Guttentag. In April 2020, he wrote that “never before—in over seventy-five years,” had this measure been a “substitute or mechanism for regulating admission under the immigration laws or for authorizing a noncitizen’s deportation or return to their home country.”

Raul Gutierrez, a pediatrician in the San Francisco Bay Area and co-chair of the American Academy of Pediatrics’ (AAP) Council on Immigrant Child and Family Health, describes Title 42 as “lacking any public health justification.” It “actually might be threatening public health and safety for asylum seekers,” he adds. “I don’t think that there’s a defensible public health reason to keep Title 42 in place.” AAP has also called for the CDC to end the use of Title 42.

On Oct. 6, Koehler and several colleagues sent a letter to CDC Director Rochelle Walensky asking her to end the use of Title 42. “This order has no basis in science,” they wrote. “The order does not protect Border Patrol agents, migrants or the American public from COVID-19…Instead, your order reinforces a dehumanizing trope of migrants as vectors of disease.” More than 300 medical professionals across the country signed the letter.

The Program on Forced Migration and Health has also written several similar letters since Title 42 was invoked. In a Sept. 1 letter to the CDC, DHS and the Department of Health and Human Services (HHS), the agency that oversees the care of unaccompanied minors, more than 40 professors and medical experts said Title 42 “continues to unethically and illegally exploit the COVID-19 pandemic to expel, block, and return to danger, asylum seekers and individuals seeking protection at the border.”

Zard says the CDC has not responded to any letters from the Program on Forced Migration and Health, including one from Dec. 2020 that offered suggestions for how the government could continue asylum access while mitigating against COVID-19.

“We were prepared for the Biden administration to need a couple of months, maybe three months,” Zard tells TIME, adding that she and the members of the program believed the Biden Administration was working in good faith. “But that belief in that good faith has waned very, very considerably…I think there’s no question now that these measures could have been put in place, there’s just not the political will to do so, and it’s shameful.”

There has been no scientific research conducted on the question of whether Title 42 has affected the spread of COVID-19, according to both Zard and Katherine McCann, a senior program officer at the Program on Forced Migration and Health. A CDC spokesperson did not answer TIME’s questions on whether the agency was studying the impact internally.

A DHS spokesperson says the agency refers anyone in their custody who is exhibiting symptoms to local health systems for appropriate testing, diagnosis and treatment. CBP does not offer COVID-19 testing before expelling migrants unless they show signs of illness.

Lawyers and humanitarian aid workers at organizations like Al Otro Lado, Las Americas Immigrant Advocacy Center and Global Response Management argue that Title 42 has exacerbated the spread COVID-19 among migrant populations on the Mexican side of the border. The problem, they tell TIME, is particularly acute when CBP has detained large groups of migrants in one part of the border for days or weeks, then transported them to another part of the border to expel them.

Read More: Shelters From Reynosa to Tijuana Are at Capacity and Scrambling for Resources as the U.S. Continues to Expel Migrants

NGOs and local governments in the Mexican border cities are overwhelmed with handling expensive testing and quarantine measures. In Ciudad Juárez, just across the U.S.-Mexico border from El Paso, Texas, where shelters are already at capacity and social distancing is nearly impossible, community organizers are searching for a new facility help to prevent outbreaks of COVID-19.

“It’s an emergency waiting to happen,” says Karina Breceda, one of the people leading the search. Though the city has taken steps to prevent the spread of COVID-19 in migrant communities—like placing expelled migrants in quarantine at a hotel before sending them to shelters—the systems are fragile and expensive, and vaccines are not reaching migrants as quickly as they are reaching Juárez citizens.

“The NGOs are moving mountains,” says McCann. “But you can’t put on civil society what is the government’s responsibility.” 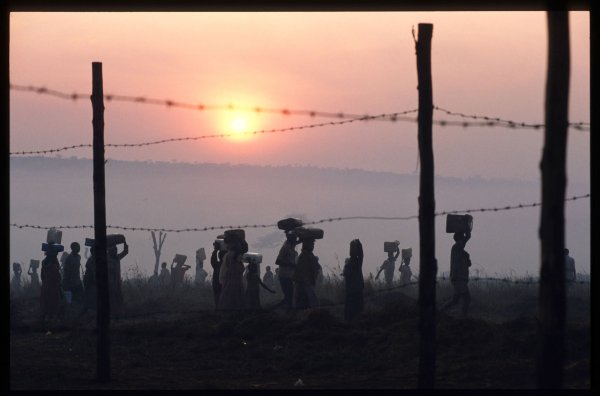 The Invisible Tragedy Facing Refugees Like Me
Next Up: Editor's Pick