When the crisis in Ukraine began late last year, Russian President Vladimir Putin’s government issued a lengthy list of demands to the U.S. and its European allies. Near the top was a call for the nations to withdraw all their troops, equipment and weaponry from former Soviet-bloc states bordering Russia.

On Tuesday, less than 24 hours after Putin ordered the invasion of breakaway regions in eastern Ukraine, the U.S. military is sending even more firepower to Russia’s doorstep.

President Joe Biden ordered American troops, attack aircraft and fighter jets into eastern Europe to reassure North Atlantic Treaty Organization (NATO) allies and deter further aggression from Moscow. “As Russia contemplates its next move, we have our next move prepared as well,” Biden said at the White House Tuesday. “I have authorized additional movements of U.S. forces and equipment already stationed in Europe to strengthen our Baltic allies, Estonia, Latvia and Lithuania.”

The White House and European allies have scrambled to respond since Russia began massing more than 190,000 troops along Ukraine’s borders. For months, Biden has insisted U.S. troops will not fight in Ukraine, which is not a NATO ally, but he has redoubled defenses in surrounding countries by temporarily repositioning American forces from other parts of Europe. “These are totally defensive moves on our part,” Biden said Tuesday. “We have no intention of fighting Russia. We want to send an unmistakable message that the United States together with our allies will defend every inch of NATO territory and abide by the commitments we made to NATO.”

About 6,000 U.S. forces have already been sent to Germany, Poland and Romania. In Poland, U.S. paratroopers with the 82nd Airborne Division are setting up military facilities in preparation for processing thousands of refugees expected to flee across the country’s eastern border with Ukraine should Moscow launch a mass invasion. In Romania, which borders Ukraine to the south, Army Stryker squadrons consisting of 1,000 troops have moved from Germany to prepare for any frontier issues that might follow an escalating conflict. A battalion of 20 attack helicopters and two dozen fighter jets have been ordered to bolster aerial defenses in Eastern Europe.

The U.S. now has more than 90,000 troops on the continent, most of whom are positioned outside Eastern Europe. Over the past month, Biden has more than doubled the number of American ground troops in Poland, to around 9,000, and in Romania, to nearly 2,000.

The forces Biden announced on Tuesday include an infantry battalion task force of about 800 service members that will move from Italy to the Baltic region; up to eight F-35 fighter jets from Germany to unnamed bases “along NATO’s eastern flank;” 20 AH-64 Apache helicopters from Germany to the Baltics; and 12 other Apache helicopters from Greece to Poland.

The deployments were made in response to Putin’s increasingly aggressive moves. On Monday, the Russian President recognized the self-declared independence of Donetsk and Luhansk, two breakaway regions in eastern Ukraine controlled by Moscow-backed separatists, and then directed Russian troops to occupy the territory for “peacekeeping functions.” U.S. and European leaders say they believe this is just the beginning of military campaign that could become the largest conflict on the European continent since World War II.

The deployment of additional ground and air forces to NATO’s eastern flank carries risks. Communication between the U.S. and Russia—nations commanding the world’s two largest nuclear arsenals—has been limited ever since Putin annexed the Black Sea peninsula of Crimea in 2014. Talks were further curtailed when American intelligence agencies uncovered that the Kremlin engaged in a multi-pronged campaign to meddle in 2016 U.S. presidential elections. Fewer lines of communication increase the chance of miscalculation on both sides.

In addition to the military moves, Biden and European leaders enacted wide-ranging sanctions targeting Russian oligarchs and banks. Germany also said it halted the certification process of the lucrative Nord Stream 2 pipeline, which is designed to pump natural gas 750 miles from Russia to Germany.

“We still believe that Russia is poised to go much further in launching a massive military attack against Ukraine,” Biden said. “I hope I’m wrong about that. But Russia has only escalated this threat against the rest of Ukrainian territory including major cities including the capital city of Kyiv.”

U.S. Defense Secretary Lloyd J. Austin said Friday in Warsaw that Poland could see tens of thousands of Ukrainians come over its borders from the resulting violence. He stood alongside Polish Defense Minister Mariusz Blaszczak who declared his nation is ready for the refugees. “We, as a nation that has so strongly and badly experienced World War II, we know what support is all about,” he said. “We are ready, of course, to support all those who need the support and who suffer because of such an aggression.”

Russian lawmakers authorized Putin to use military force outside Russia on Tuesday, which raised the prospect that forces might push further into Ukraine. Putin said the current crisis could be resolved if Ukraine unilaterally stopped fighting the Russian-backed separatists in the east, promised never to join NATO and formally recognized Moscow’s sovereignty over Crimea. “It will depend on a concrete situation as it takes shape on the ground,” Putin said when asked about his forces’ mission. 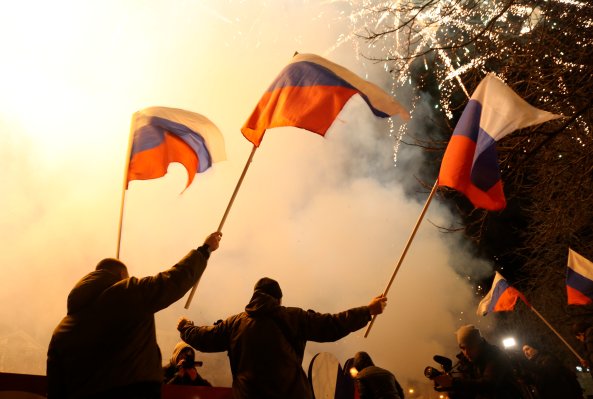 Russia Orders Troops Into Ukraine
Next Up: Editor's Pick