The Story Behind TIME's 'Year One' Joe Biden Cover

Illustrations by Tim O'Brien for TIME
Ideas
By D.W. Pine
D.W. Pine is the Creative Director at TIME.

As President Joseph Biden closes in on his first year in office, the Jan. 31, 2022, TIME cover returns to a familiar setting—a gloomy Oval Office.

Artist Tim O’Brien christened Biden’s administration with “Day One,” a Feb. 1, 2021, cover depicting the cluttered mess he was facing upon entering office.

His latest, “Year One,” depicts the president facing a growing storm with COVID-19 tests stacked up in the corner and issues like inflation, Russian President Vladimir Putin’s maneuvering, domestic policy, and the prospect of the return of Donald Trump to the national stage, adding to the gloomy forecast.

“This new cover shows Biden in a cleaned-up office, but the tasks remain, and the mounting issues gather like storm clouds,” says O’Brien, who has painted more TIME covers (36 and counting) than any artist in the past 50 years, including subjects ranging from the Catholic church to Osama Bin Laden.

As TIME’s Molly Ball and Brian Bennett write in their cover story, “the pandemic he promised to bring to heel rages out of control. Inflation is at a four-decade high, canceling out rising wages. The border is a mess; violent crime continues to rise. His approval rating has sunk to the low 40s.”

Adds O’Brien: “A year later, Biden sits at the resolute desk, with mounting tasks and threats and a persistent COVID pandemic all still lingering. The country needs him to rise to the moment before it really starts raining.”

Illustrations by Tim O'Brien for TIME

Outside of his collaboration with TIME, O’Brien has created work which has appeared in publications all over the world, as well as several on U.S. postage stamps including the popular Hunger Games trilogy. Two of his TIME magazine covers—one with Bill Clinton and Bob Dole and the other with the “Grand Old Populists,” both published in 1996—reside in the National Portrait Gallery at the Smithsonian in Washington, D.C. 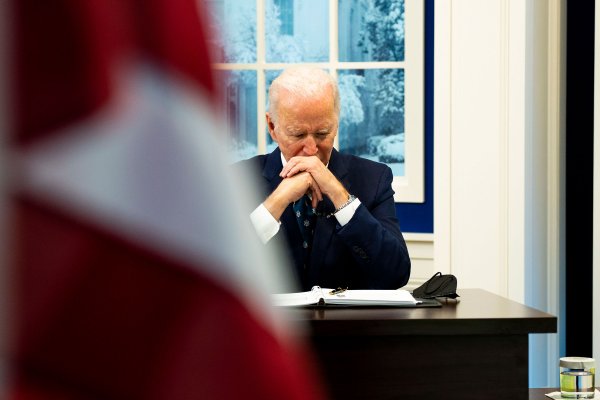 How the Biden Administration Lost Its Way
Next Up: Editor's Pick