The COVID era has brought us many new experiences: mask-wearing, remote schooling, sheltering in place. The majority of these have been onerous and dreary. It’s amazing how energy-sapping it is to just have to wait for something to be over. But now at last we can do a new activity! An activity that will help reduce the spread of COVID! An activity that takes us places we haven’t been before, from the comfort of our home! And that activity is sticking a swab up our noses and investigating what comes out.

Testing for COVID at home, I would argue, is the project we’ve all been waiting for. It’s good for you and the people around you. It’s novel. It actually does something about the pandemic. It’s (so far) uncontroversial. After months of having to find fulfillment with virtual experiences we get to do real life experiments. And they’re on the people we are most fascinated by: ourselves.

Am I unreasonably enthusiastic about the benefits of home testing? Perhaps. It’s been a long 22 months. But also, there are very few occasions in life where you get to conduct your own medical tests. Mostly you just deliver some bodily fluid and never hear much news of it again. Some of us with two x-chromosomes might have done a pregnancy test or two, or needed to figure out when they’re ovulating, but there’s not much to that. Those with chronic conditions like diabetes are obliged to keep checking their blood sugar, but nothing that requires sharp implements and skin can be considered at all fun. I’ve always kind of liked the challenge of those blood-alcohol tests you blow into, although they’re one of the rare experiences that is less fun if you’ve been drinking.

The at-home COVID-19 tests however, are a genuine do-it-yourself chemistry test. You have to gather a sample, mix it with a reagent, test the solution and interpret the results. There are little kits. Some of the tests even encourage rubber gloves. It’s like Breaking Bad meets Penn & Teller meets Martha Stewart. It’s CSI: Homefront. It’s as if we’ve all switched from being Zooey Deschanel in Who’s That Girl to Emily Deschanel in Bones.

The introduction of at-home tests, of course, has not been without its hiccups. There are widespread shortages, despite the fact that tests have been available since Nov. 2020, and the government had ample opportunity to ramp up production in the 14 months since. The tests are not 100% accurate. They’re expensive, from $89 for an FDA-authorized at-home molecular test to $13 for two rapid antigen tests, and that’s before the price-gouging going on online. Health insurers have taken their sweet time to cover them. None of them have been fully approved by the FDA; they’re operating under an emergency use authorization, like the vaccines used to be. The tests offer QR codes that link to apps and online tutorials, in case you prefer video instructions or lose yours, but some apps require you putting in personal details that many people don’t want to hand over. And finally, an at-home test does not come with the reporting and follow-up protocols of those done in a clinic. It requires people to be responsible.

Nevertheless, home tests are an enormous leap forward from a mere 22 months ago, when those who suspected someone in their vicinity had COVID-19, including this writer, just had to sit at home, taking temperatures, doomscrolling for symptoms and crossing their fingers that it was just a cold. (It wasn’t.)

If you can find any home test at your local pharmacy (anecdotal reports suggest they’re easier to get from brick-and-mortar stores than online), then you should probably grab it. Which one should you use? There’s not enough data to suggest which is the most accurate, but I tried five tests and ranked them from most fun to use to least fun, because if everything we do is a drag, then the virus has won.

(By the way, If you were hoping to skip the uncomfortable nose poking part by taking an at-home test, you’re out of luck. All the tests come with a nose swab, some long and elegant, others more Q-tip-sized. Each test requires brushing, circling or wiping the inner circumference of each nostril four or five times for 15 seconds. I imagined I would prefer doing this myself than having it done to me. I was wrong. I’m not very gentle and I couldn’t see what I was doing so I never managed to swab my nostril without bringing tears to my eyes and making myself sneeze. Your mileage may vary.)

1. Binax Now (Abbott Laboratories, about $12 per test): Like all tests, this pack comes with nasal swabs, reagents and a test reader. What makes it different is that it has this nifty card into which you slide the swab once you’ve poked your nose with it. You lay this card flat on the table. You then twist the lid off a little plastic doodad with the reagent in it and put 6 drops into one of the holes on the card. (Figuring out which hole is the trickiest bit). You then push the snotty swab through the other hole, twirl it a few times and fold the card over, after exposing a small strip of adhesive, so that you form a kind of square lollipop out of the swab. (Most tests just give you a plastic tab.) After 15 minutes you check how many stripes appear on your lollipop window. One is good, two is not.

2. QuickVue (Quidel Corp, about $12 per test): Once you get past the hideous spelling of its name, this one is reminiscent of an old school science test. Each pack comes with a stand, into which you place the tiny tube of reagent. After you’ve stirred up the interior of your nostril you swirl the swab in the test tube for one minute, remove it and then dip a strip of paper in the test tube for 10 minutes. You then lay the strip alongside a chart on the instruction sheet to check it against the images of positive and negative results. It’s pretty hard to louse that up.

3. on/go (AccessBIo, about $12 pertest: This one gets points for its colorful packaging. I enjoyed imagining I was buying sunscreen for a long-delayed vacation rather than a specimen collector. (The product’s distributor, Intrivo, prides itself on its “delightful user experience.”) It has a short swab and a vial stand like several others. It’s the only test I took that asked me to flick the specimen bottle, like a real lab technician might. You then squeeze some of that liquid into a hole on a rectangle of plastic which holds a test strip. Hilariously, the instructions see fit to remind users that failure to put the swab in their noses may lead to an inaccurate result.

Read More: My Child Is Turning 12. Which COVID-19 Vaccine Should They Get?

4. Flowflex (Acon Biotech, about $10 per test): This test is gutsy enough to put an image of the spiked coronavirus on its packaging. Ominously, the virus is blue and looks vaguely like planet earth being attacked by purple trees. It was also the only one that came with a stamped certificate of quality—all the way from Hangzhou in China. Its chief design innovation is that the cardboard box in which it comes has a little perforated hole where you place the tube of reagent, which has a sort of MacGyver-ish appeal. Once you’ve finished with your nostrils, you have to put the swab in and squeeze and swirl it at the same time, which requires just a scintilla more skill than the others. From then on, it’s the same deal as the others: squeeze solution onto plastic tab and wait.

5. IHealth (iHealth Labs, about $7 per test): The cheapest test is also the least fun. It has a similar squeezable vial of liquid into which you put your post nasal swab and swirl it and then drip the resulting goo onto a the little plastic tester. It’s a bit more confusing though: because of the design, it’s difficult to tell which was the used vial and which was the unopened one when I finished the test and I had to dispose of both of them.

All of my tests were negative. But I had a positive case in my household and all the tests we tried caught it, although occasionally the line indicating a positive result was very, very faint and we had to look closely. In any case, it certainly beat standing on a long line. Having COVID can be very unpleasant. Testing for it, however, is kind of cool. Sometimes you even get a weird lollipop at the end.

The original version of this story misstated the instructions for the QuickVue test. The strip of paper should be dipped in the test tube for 10 minutes, not one minute. 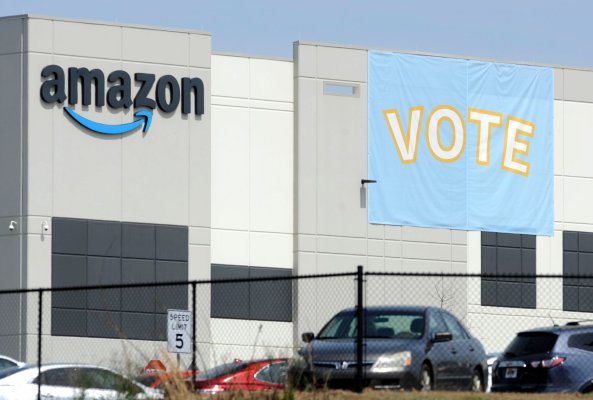 Amazon Workers Will Vote on Unionization by Mail
Next Up: Editor's Pick