If ever you need your faith in humanity restored, just remember this: Yellowjackets ended its first season a hit. Showtime’s teen-girl survival chiller owes a good bit of its popularity to its Lost-style mysteries, which have had obsessive Yellowjacketologists dissecting those puzzle-box elements in various online forums. (Misty would be so proud.) I, too, have lost hours debating whether Adam is grown-up Javi and trying to identify the girl who gets skewered in the pilot’s cold open. And yet, I came out of Sunday’s finale—which confirmed that the victim was neither Jackie, who froze to death, nor Lottie, who is apparently still alive—far more eager to talk through the season’s sneakily subversive themes.

Because adolescence is a gauntlet, and because women are still the second sex, almost every story pop culture tells about teenage girls is also in some way a story about the horrors, physical and emotional, society inflicts on them. That includes many roles that made Yellowjackets’ stars famous. Juliette Lewis played a notorious spree killer scarred by sexual abuse in Natural Born Killers. Christina Ricci portrayed a beautiful young hostage in Buffalo ’66. Melanie Lynskey made her debut, in Peter Jackson’s Heavenly Creatures, as a sick child turned delusional murderer. What we rarely see are depictions of young women cut off—or liberated—from their social context.

Yellowjackets corrects that failure of imagination by stranding its team of soccer champs in a wilderness so remote, it practically qualifies as the hypothetical “state of nature” that political philosophers dreamed up to imagine how humans behaved before the dawn of civilization. A few male passengers survive the crash, but one is a child, one is a nervous virgin (well, until Doomcoming) and the third is a gay amputee; they pose no physical threat to the ascendant matriarchy. Instead, the most vocal opponent to this new way of living is the team captain, Jackie, who quickly devolves from suburban golden girl to nihilistic woodland outcast. Her death from hypothermia in the season finale severs the Yellowjackets’ last tie to the old social order.

No matter how many cliques they sketch out, most stories about high school presume a binary between winners and losers—cool kids and nobodies, jocks and geeks, mean girls and their prey. That includes Yellowjackets. But, as is its tendency, the show has a darker read than its predecessors. Back in New Jersey, even among these extraordinarily talented girls who are the pride of their school, only Jackie really thrives. She has the beauty, the wealth, the planned-out future, the supportive sidekick in Shauna and the devoted boyfriend of four years, Jeff, who doesn’t push her to put out. Sure, Jeff and Shauna are hooking up behind her back, but Jackie only learns about that after she’s lost everything else in the crash. When reality doesn’t jive with her desires (see also: Shauna’s early acceptance to Brown), no one dares shatter her illusions. To reference another ’90s touchstone, it’s like she’s the star of her very own Truman Show.

Her flourishing comes at a cost to the others. In the series premiere, Travis and Javi’s dad explains that he made her captain not because she’s the strongest player (“Shauna’s faster, Lottie’s got the best footwork by a mile, and Taissa…”), but because she alone possesses “influence.” She’s steady and charismatic enough, under normal circumstances, to keep her teammates grounded. If pragmatism of that sort is rare in teen girls, that’s probably because it can take a lot of magical thinking to get through female adolescence. But Jackie never needs to dissociate because the world she inhabits revolves around her. When she stops Shauna from pulling Van out of the burning plane, the implication is that Jackie—for whom Shauna is just an extension of herself—instinctively prioritizes her own survival over that of anyone else.

Meanwhile, what do the surviving Yellowjackets have to go home to? (R.I.P. Laura Lee, who had Jesus.) Misty was a friendless creep, hence her surreptitious dismantling of the plane’s black box to prolong her adventure with the popular girls and her beloved coach. Lottie, the once and perhaps future Antler Queen, has super-rich absentee parents; in one early scene, we watch her swallow antipsychotics under the cold eye of a uniformed maid. Bleak! Van’s mom drinks, Taissa’s outward calm conceals a well of subconscious rage, and the two of them are also, by all appearances, still closeted. Natalie’s family is a tragedy of true-crime proportions. As minor as Shauna’s pre-pregnancy problems are by comparison, it’s clear she’s going to lose it if she has to spend much longer hiding her own light so an inferior student and athlete can shine.

This is the kind of suffering that makes people seek out something beyond their material circumstances to give their lives meaning. Remember the scene in the pilot where Jackie teases Shauna about that time she “tried to be Catholic”? (It also draws teens to brooding music, and never more so than in the ’90s, when alt-rock invaded the Top 40 and suddenly you could hear Kurt Cobain or PJ Harvey screaming about abjection on the radio. Even the MOR hits that show up in Yellowjackets, like Seal’s “Kiss From a Rose,” drip with morbid romance.) Whatever this violent new pagan cosmology turns out to be, that emerges during the psilocybin frenzy of Doomcoming and develops into a faith after Lottie predicts an end to their hunger and then kills an eerily submissive bear, the spiritual appetites it satisfies probably predate the crash.

And this is where Yellowjackets becomes more than just a smartly written, well-cast survival thriller. Over the course of its first season, the show also inverts our assumptions about the trauma these middle-aged women carry. At first, it looks as though they bear the scars of 19 months in the wilderness, regardless of whether cannibalism was part of the experience. But for a while now, I’ve been getting the sense that the players who outlived Jackie and Laura Lee never felt freer or more alive than they did while ensconced in their bloodthirsty matriarchy. Nat is a teenage drinker and an adult alcoholic, yet in the penultimate episode she mentions to the coach that she hasn’t been tempted by the bottle of liquor she found.

It‘s the civilized, patriarchal world that drives her to drink—and Shauna to despair, and Taissa to compartmentalize her political aspirations into one box and, er, blood sacrifice into another. (Misty was probably never not on a path to derangement.) Although I’m also pretty certain that Van is still alive and working for Lottie, this is the only fan theory I can wholeheartedly endorse. 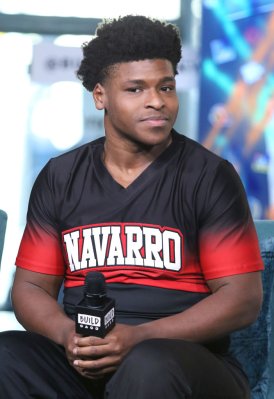