Juliette Lewis: 'I'm Into Protecting My Freedom of Choice'

Juliette Lewis, who rose to fame in her teens with an Oscar nomination for Cape Fear, has turned over a new leaf in a diverse career.

The actress-turned-rock-star-turned-actress-again has never wanted for work (see: her work in Natural Born Killers and August: Osage County, or her music work with band Juliette and the Licks). But her new role, as Detective Andrea Cornell on ABC’s Sunday-night soap Secrets & Lies, is a reinvention of sorts. She’s utterly, creepily bland, pursuing Ryan Phillippe’s murder suspect character Ben Garner with a Javert-like doggedness, turning up throughout his days to present new evidence without allowing her face to betray a single expression.

It’s a new phase indeed for an actress known as well for her onscreen wildness as for her openness about her faith and her frailties. TIME spoke to Lewis about her life as a TV star and people’s preconceptions of her Scientologist beliefs and her work.

TIME: You’re known for fairly exuberant performances, both in films and in your second career as a musician. Have you had to tamp down your more expressive side to play this role?

Juliette Lewis: As a human being, I’d be the polar opposite of this character. I’m expressive and animated. There’s all kinds of tactics that go against my DNA, the way Cornell’s written. I liken her to a mathematician or a scientist, someone who is obsessive in their thinking, and not versed in humanities in a social way. Nor does she need to be! I’ve been on a minimalism kick, because that’s where I started. In movies like Cape Fear, I never played verbal characters. Now, as a grown-up, I relish playing people that are not like myself. That’s what I enjoy about acting.

Is it difficult to play a character whose storyline is unfolding over time—whose traits you don’t know everything about yet?

I knew it would sustain my interest. After four and a half months, I still don’t know how to play her. I had an aversion towards [acting in a] series for a while—the idea of playing one person, potentially for years, I was so conditioned against it as a film actor. But we all know this is where you go for most interesting characters today—the medium of television. A lot of my backstory and potential future storylines are interesting to me. It’s going to get juicy.

Your character is pretty unlikable, in many ways. Did that bother you?

I did extensive research into being a detective. Even though people watching me may think I’m full of vengeance or hatred, it’s just that homicide detectives know how to read a crime scene. If all things are pointing to one suspect, they’ll be relentless in building a case. I watched some shows that document cases. I watched Forensic Files. Last year, I thought, Oh, my binge watching of those true crime shows prepared me for the role of a lifetime—but not intentionally!

What’s the biggest misconception about you?

I never think in those terms. Everyone’s different! I have people come up to me who love The Other Sister, or Old School, or What’s Eating Gilbert Grape. In hindsight, I can only be happy I carved a niche out for myself. I just like diversity. I’m 41! I don’t really care. I could give a shit! Well, I was scared by social media—just scared of what I might attract. Once I broke onto that thing, because I needed it for my band to tell people about shows, I realized, 99 percent of the time, people are funny, clever, inventive, beautiful. And whatever people’s conceptions are of me, I think it’s cute. I roll with it.

Yes, 100 percent. This is my time of trying to engage different creative fires, to fully discover myself as a songwriter. That’s sort of the idealistic thing of a rock band—creating alchemy. But it’s a lot of work to keep a group together and motivated. I learned a lot. It’s intensive work with people and long hours, and that’s all served me in other endeavours.

You’ve spoken in the past about your struggles with anxiety. Do you wish acting, a very vital form of expression for you, could be uncoupled from having to be a public figure?

It would be like me wishing my dad wasn’t sick. I have to be adaptable and pave a road within things that are uncomfortable. There are worse things. I don’t wish anything. This line of work is not intrusive and doesn’t interrupt my priorities or my life in any way. I get to walk my dog in the beautiful sunshine, and there’s no camera following me. Life is good. There are things I have to learn. You find tools, meditation, practicing stillness, different things—because I’m very sensitive to energy, within myself and others. I can get anxious still doing press or on red carpets, even though I’m mid-life and want to be cooler about things. Anybody can get anxious, and that’s how everyone’s feeling! Once I realize that, I realize reporters on the red carpet have a job to do and we’re all in this together—when I look at it as togetherness, not separateness—that helps a lot.

How has the pace of working on a TV changed your life?

I’m happy if my boss is happy. I have my own internal barometer. I’m just trying to find truth, honesty, complexity. There are so many choices in doing that, and it’s tough stuff. Yes, you’re pretending, but you’re pretending it’s a homicide investigation, and these are not pretty colors to dance in. And I can’t say enough good things about Ryan [Phillippe] as a professional, what a revelation he is in the show. He shows so many facets to his talent—emotion and range which you don’t see often from a male actor.

Do you feel that there are misconceptions about your religion, Scientology?

I only ever say, when I’m asked about this—my freedom. The Muslim religion, any religion, you can find trouble in. At the end of the day, I’m into protecting my freedom of choice, freedom of voice, freedom of religion, freedom of expression. And so as long as nothing is inhibiting that… But there are misconceptions that are annoying. I’ve done media and interviews since I was 19. I don’t feel I’m represented very truthfully. I still do it; it’s part of my job. I don’t go to my government to get answers; I don’t go to the media to find the truth. I find things out for myself. 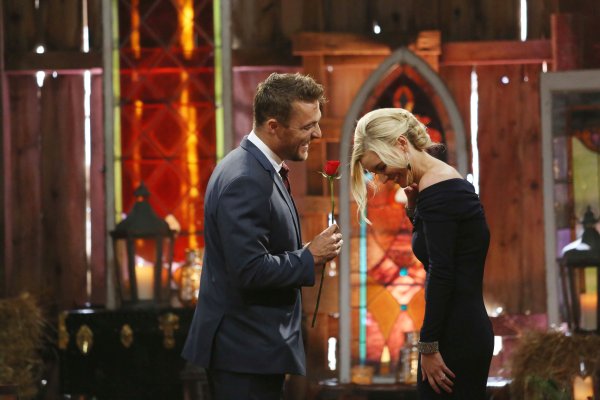 The Bachelor Explains His Big Decision
Next Up: Editor's Pick