More January 6ths Are Inevitable. How We React Is Crucial

Shortly after 9 p.m., on February 27, 1933, the Berlin fire station received an alarm: the Reichstag, the center of German government, was on fire. This was four weeks after Adolf Hitler had assumed power as Chancellor. By 11:30 p.m., firefighters had put out the blaze, which had left the Reichstag a charred carapace. On inspection, firefighters and police discovered gasoline cans bound with other flammable materials inside the building, indicating arson. Authorities identified the culprit, a 23-year-old communist named Marinus van der Lubb, who was swiftly arrested. He would be tried and executed within a year, and Hitler would use the Reichstag fire as a pretense to blame communists and to declare a national emergency. This allowed him to eliminate some of his key political rivals and consolidate his power by suspending civil liberties inside Germany.

It has been a year since the January 6 insurrection, an event that has drawn fair comparisons to the Reichstag fire. Those comparisons are worth revisiting as we enter the New Year, one beset with potential political flashpoints equal to those of 2021. Whether it be critical Supreme Court decisions in cases such as Dobbs v. Jackson Women’s Health or voting rights and the midterm elections, the result of ever-increasing polarization in a society is the increased likelihood of political violence. What might be the result of such violence? It’s worth considering who wins and who loses in the next fire.

The evocation of Nazism to discredit one’s political rivals is, admittedly, a tired device. However, the Reichstag fire is worth considering not because of what it demonstrates on ideological grounds, but rather on tactical ones. Like January 6, competing narratives emerged in the wake of the fire. From the outset, Hitler and his allies were keen to prove that Lubb, the arsonist, had been part of a vast, sinister communist plot, even though most historians believe he acted alone. It was in the Nazi’s interest for the arson to be part of a plot and preferably a large one; that’s because the size of that plot would be directly proportional to the threat it represented to Germany, and so directly proportional the powers Hitler wanted to consolidate for himself to protect the state against this threat.

Like the Reichstag, the U.S. Capitol is a symbol and institution of the state. In the years ahead, it’s likely that we’ll experience other January 6-style moments. With both sides spinning events, it may be difficult to distinguish which of these crises are political theater and which are true threats to our democratic institutions. How we understand these moments and respond is likely to determine our democracy’s future. Although the courts have handed down substantive prison sentences for some perpetrators of the January 6 insurrection, the politicians who instigated the attack on the Capitol have gone unpunished, unless one counts the anemic bi-partisan commission tasked to investigate the insurrection. Such impunity might lead one to believe that violence akin to January 6 can prove politically effective; this would be a mistake. Democrats have, largely, been unsuccessful in using the January 6 insurrection as a tool to hold their rivals accountable, but this doesn’t mean that such accountability—or even a purge of rivals—wouldn’t be possible under similar conditions; if, say, a January 6-style attack on institutions were to repeat itself with different, more ruthless political leadership at the helm of American institutions.

In the lead up to the 2020 Election—whose aftermath many correctly predicted would be chaotic and violent—the privately organized Transition Integrity Project (TIP) embarked upon imagining such scenarios. Hosted by nonpartisan nonprofit Project Democracy Project, whose mission is “to hold the President and the Executive Branch accountable to the laws and longstanding practices that have protected our democracy through both Democratic and Republican Administrations,” the TIP was comprised of former senior-officials from both parties. They conducted a series of wargames around four possible electoral outcomes: an ambiguous result; a clear Biden win; a clear Trump win; a narrow Biden win. Although a number of these scenarios resulted in no clear election winner by Inauguration Day—with political violence erupting in the streets—what was clear in each scenario was that the side which first aimed its political violence at state institutions found its legitimacy at a significant disadvantage, i.e. whomever escalated the political conflict into a violent one suffered. A final report from the wargames noted how those playing Team Trump “encouraged chaos and violence in the streets and aimed to provoke Team Biden into subverting norms—even as Team Trump itself sabotaged traditional norms—so that Team Biden could be accused of hypocrisy or even illegality.” With the outcome of the election never truly in doubt, Biden supporters largely stayed at home in its aftermath; however, had a few Republican state secretaries not held the line when counting ballots, it’s not difficult to imagine two warring factions in America’s streets.

Rightwing apologists for January 6 have pointed to leftwing violence in the summer of 2020 to contextualize and even justify the violence at the Capitol. As we enter 2022, it might prove similarly tempting for those on the left to use January 6 as justification for their own attacks against government institutions. It isn’t difficult to imagine protestors in the near future storming state capitols amidst claims of voter disenfranchisement (on the left) or election fraud (on the right) in a governor’s race; or, at the federal level, it isn’t difficult to imagine protestors breaching the confines of the Supreme Court given the high-stakes rulings that will soon be announced.

Such acts likely would place whoever engages in them, as well as their agenda, at a distinct disadvantage, as has been the case for Republicans, with nearly three-quarters of Americans believing that those who attacked the Capitol were “threatening democracy.” It would place a weapon in the hands of the opposition, one they could potentially use to consolidate power in a radical fashion. This is how Hitler used the Reichstag fire. It was a gift, one he benefited from greatly. Walter Gempp, the head of the Berlin fire department who’d commanded the response at the Reichstag later claimed the Nazis obstructed the response of his units, causing the fire to burn longer than it otherwise might have. After publicly making these claims, he was swiftly imprisoned. Years later, he was found dead, strangled in his cell. His crime against the Nazis: putting out the fire. 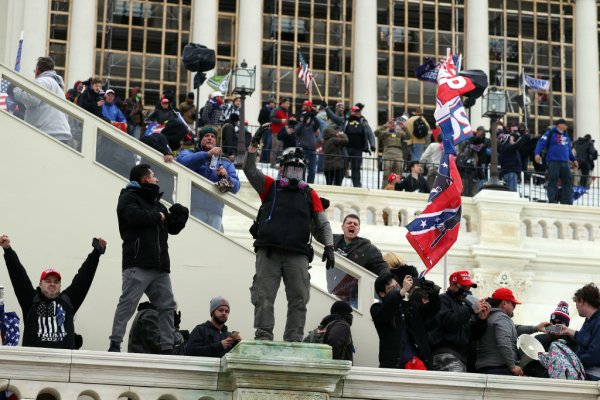 How the U.S. Can Avoid Another Civil War
Next Up: Editor's Pick