What Happened to Jan. 6 Insurrectionists Arrested in the Year Since the Capitol Riot

By Nik Popli and Julia Zorthian

More than 725 people have been arrested for storming the U.S. Capitol building on Jan. 6, 2021, with charges ranging from obstruction of an official proceeding to assault. But at the one-year anniversary of the attempted insurrection, a significant number of rioters are still awaiting their sentencing.

Only around one-tenth of those arrested—71 individuals—have received criminal sentences, while the rest are waiting for their trials or haven’t yet reached plea agreements. According to the U.S. Attorney’s Office for the District of Columbia, 31 defendants were sentenced to periods of incarceration, with longer prison terms for those who engaged in violence or threats. So far, the median prison sentence for the Jan. 6 rioters is 45 days. An additional 18 rioters have been sentenced to periods of home detention, while most sentences have included fines, community service and probation for low-level offenses like illegally parading or demonstrating in the Capitol, which is a misdemeanor.

Hundreds of additional cases are expected to be adjudicated in the coming months, with a number of sentencing hearings already on the calendar in 2022.

Here’s a look at what happened to nine of the most high-profile Jan. 6 rioters.

The Florida man who hurled wooden boards and a fire extinguisher at police officers guarding the Lower West Terrace tunnel of the Capitol was sentenced to more than five years in federal prison—the longest sentence given to anyone charged in the Jan. 6 riot.

Palmer, age 54 at his sentencing, pleaded guilty in October to assaulting law enforcement officers with a dangerous weapon. His plea agreement originally called for a 46 to 57 month sentence, but it was increased to 63 months after he wrote on his fundraising website that he had acted in self-defense, contradicting his earlier comments in court about taking responsibility for his actions.

Thompson took part in the rioting for nearly three hours on Jan. 6, during which time he assaulted a police officer with a metal baton. He also tried to throw a speaker at the police, but missed and ended up injuring another rioter.

Thompson later pleaded guilty to assault with a dangerous weapon. In December, Federal District Court Judge Royce Lamberth sentenced the 28-year-old Thompson to 46 months in prison with credit for time served, along with 36 months of supervised release and a required payment of $2,000 in restitution.

“You didn’t just come up and sock a guy in the face,” Lamberth said at the sentencing. “You’re shoving and pushing…and participating in this riot for hours.” Thompson apologized to the officer he hit with the baton in a letter filed in court.

Chansley—a self-described shaman and a follower of the QAnon conspiracy theory—is one of the most recognizable Jan. 6 rioters, thanks to viral photographs of his outlandish getup.

According to court documents, Chansley confessed to federal agents that he was the man photographed in former Vice President Mike Pence’s chair on the Senate dais with his face painted, wearing a horned headdress and no shirt. His imposing image became a symbol of the Jan. 6 attack, though he later expressed regret for storming the Capitol.

“What you did was terrible. You made yourself the epitome of the riot,” Lamberth said Nov. 17. “You didn’t slug anybody, but what you did here was actually obstruct the functioning of the whole government. It’s a serious crime.”

Chansley, age 34 at his sentencing, pleaded guilty to one charge: obstruction of an official proceeding. He was sentenced to 41 months in prison.

Videos from the Capitol riot show Fairlamb climbing on inauguration scaffolding, pushing a police officer into a group of people and punching the officer’s face shield. Court filings also indicate that Fairlamb briefly entered the Capitol.

In one video he posted to Facebook on Jan. 6, Fairlamb yells: “What patriots do? We f—n’ disarm them and then we storm the f—n’ Capitol.”

Fairlamb, age 44 at his sentencing, pleaded guilty in August to assaulting an officer and obstructing an official proceeding of Congress. He was sentenced to 41 months in prison, with credit for time served, and ordered to pay $2,000 in restitution for damages to the building.

Meredith traveled from Colorado to attend the “Stop the Steal” rally that led to the attempted insurrection at the Capitol, but later told investigators that he arrived too late in the evening. The day afterward, on Jan. 7, he sent a family member in Georgia a text message threatening to kill House Speaker Nancy Pelosi. Meredith’s mother contacted the FBI, and members located him at a Holiday Inn a mile from the Capitol.

Meredith gave investigators consent to search his phone, along with his truck and trailer outside. The FBI discovered texts in which he threatened to assassinate Pelosi and District of Columbia Mayor Muriel Bowser. He had sent a text earlier that day that said, “Calm before the STORM,” seemingly referring to a cataclysmic event in which QAnon followers believed that Donald Trump would expose a cabal of satanic pedophiles. In the search of Meredith’s trailer, the FBI found an assault rifle, a nine millimeter pistol and hundreds of rounds of ammunition.

Meredith, age 53 at his sentencing, pleaded guilty to communicating a threat across state lines. In December, he received a sentence of 28 months in prison with credit for time served.

Gracyn Dawn Courtright carrying a sign that reads 'members only' in the Capitol.
Department of Justice/AP

While she was inside the Capitol, Courtright, then age 23 and a senior at the University of Kentucky, took a photo of herself in a mirror and afterward posted it to Instagram, along with the words, “INFAMY IS JUST AS GOOD AS FAME.” She shared her participation in the riot on Instagram multiple times, and someone took a screenshot and reported her.

Footage from Jan. 6 shows Courtright on the second floor of the Capitol building, holding up a “Members Only” sign. Authorities arrested her two weeks later and she faced multiple charges, including for theft of the sign.

Courtright pleaded guilty to a charge of entering a restricted building in August, at which point other charges against her were dropped. In December, she was sentenced to one month in prison. In addition, she has a year of supervised release following her sentence, will need to complete 60 hours of community service and must pay $500 in restitution for damages to the Capitol.

Barnett was photographed with his foot on a desk in Pelosi’s office during the violence at the Capitol.

He was released in April while he awaits his trial, after spending nearly four months in jail on charges including obstructing an official proceeding, entering the Capitol while armed with a deadly or dangerous weapon (a stun gun), and theft of government property (for stealing a piece of government mail).

Barnett, age 61, will appear in federal court again on Feb. 1 and could face a sentencing of up to 87 months in prison if he is found guilty on all charges.

Greene is the first self-identified member of the Proud Boys—a far-right extremist group—to plead guilty to obstructing Congress and conspiring to obstruct law enforcement during the Capitol attack.

Court documents indicate Greene, age 34 at the time of his plea, was “among the first wave” to rush up the Capitol steps after the police line was breached. He faces up to 25 years in prison, although prosecutors plan to recommend a sentence of 41 to 50 months because he agreed to cooperate with law enforcement. His hearing is scheduled for March 10.

One week after Jan. 6, Chapman told someone on the dating app Bumble that he took part in the riot. “I did storm the capitol,” he wrote in a message. “I made it all the way to Statuary Hall!” The person Chapman confessed to then replied, “We are not a match.”

Later that day, the person Chapman communicated with on Bumble contacted the FBI. Federal investigators matched Chapman’s Bumble profile to images of him inside the Capitol building. They identified him by working with New York State authorities and matching his likeness to a 2017 mugshot, in which he had the same distinctive sideburns.

In December, Chapman at age 51 pleaded guilty to “parading, demonstrating or picketing” in a Capitol building. His sentencing is set for April 4, where he will face up to six months in prison and a maximum fine of $5,000. 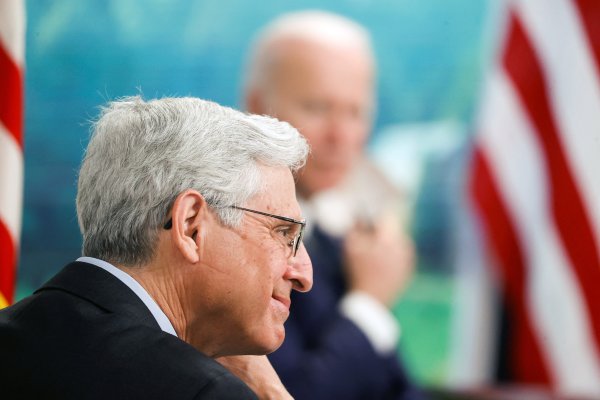 Merrick Garland Must Follow Through With His Commitment to Hold All January 6 Perpetrators Accountable
Next Up: Editor's Pick