For the Jan. 6 Rioters, Justice Is Still Coming

In the predawn hours of Dec. 14, residents of a quiet street in Tamarac, Fla., were woken up by the flashing lights of police vans. As officers deployed around a modest house, one man videoed a SWAT team arresting his neighbor, Mason Courson, bringing him out of his home with his hands behind his back.

It’s a scene that has played out in hundreds of neighborhoods across the country over the past year. Courson, 26, was allegedly part of the mob of supporters of former President Donald Trump that stormed the U.S. Capitol on Jan. 6, 2021, intent on stopping the certification of his loss in the 2020 election. Shouting “Heave, ho!” Courson and a group of rioters had crushed a bleeding D.C. police officer between two doors as they forced their way into the Capitol, according to prosecutors. They said the group went on to beat another officer with a baton, which Courson allegedly kept as a possible “trophy” or “memento.”

It took 342 days for FBI agents to come to Courson’s door and charge him with eight federal offenses, including assaulting officers, civil disorder, and entering a restricted building with a deadly or dangerous weapon. “Crazy they still finding them,” one resident observed in the Facebook comments of a local news story. “Dudes probably thought they got away with it.”

Trump supporters protest in front of the Capitol before a crowd stormed the building on Jan. 6, 2021.
Brent Stirton—Getty Images

The tear gas had barely dissipated from the Capitol riot last year when the FBI launched the largest federal investigation in U.S. history. Aided by a steady flow of tips from Internet sleuths and the public, the agency has identified and charged more than 720 men and women involved in the attack that left five people dead and lawmakers frantically calling for help as a violent crowd shattered windows and ransacked offices. More than 140 police officers suffered injuries—including concussions, cracked ribs, smashed spinal disks and stab wounds—and four officers who responded have since taken their own lives.

But as investigators closed in, the country drew apart. Today roughly half the number of Republicans support prosecuting the Jan. 6 mob as did a year ago, polls show. As prosecutors, judges and juries hold those who broke the law to account, the entire investigation has come under attack.

For many, the arrests of rioters who beat police officers and erected a fake gallows and chanted, “Hang Mike Pence!” have brought a sense of justice, even relief. But many others see the probe as part of a politically motivated crackdown on a largely peaceful group exercising their First Amendment rights. What the American justice system has found to be a riot, GOP lawmakers, conservative media and right-wing activists cast as a legitimate protest that just got out of hand. By and large, they recall the day as an exuberant, even lighthearted, exercise in self-expression: the smiling grandmothers in red Trump hats posing for photos in the chaos; the Texas man drinking a beer who bragged, “I don’t always storm the Capitol of the United States of America, but when I do, I prefer Coors Light.”

Now, as the investigation enters its second year, federal officials face the uncomfortable possibility that the more successful they are, the more Americans may take up the cause of people seen as persecuted patriots. “Within a week of Jan. 6, there was a recognition that how we address what happened had to be done very carefully because it can have unintended consequences of causing additional radicalization,” says Elizabeth Neumann, who until 2020 led the Department of Homeland Security office that oversees responses to violent extremism.

But even she was surprised at how quickly some have cast the rioters as beleaguered champions of free speech. “More people may be vulnerable to suggestions that breaking the law or committing an act of violence is appropriate to preserve their agency,” she says. “That is a powerful narrative: that their government is out to get them.”

Police clash with Trump supporters in the Capitol rotunda after they breached the building on Jan. 6, 2021.
Mostafa Bassim—Anadolu Agency/Getty Images

The FBI has been swamped by evidence. Agents have sifted through 15,000 hours of footage from surveillance and law-enforcement body cameras, electronic communications from some 1,600 devices and more than 270,000 tips from the public. Then there is all the digital media generated by the rioters themselves, many of whom documented their exploits on social media in real time. As of Jan. 5, at least 220 people had been charged with assaulting, resisting or impeding officers, 75 of them charged with using a deadly or dangerous weapon or seriously injuring an officer. So far at least 150 of the over 720 people charged with federal crimes related to the riot have pleaded guilty.

The resource-intensive investigation has taken place amid scrutiny of how the FBI handled warnings of potential unrest before Jan. 6. It and other agencies dismissed online threats to violently attack Congress, bring firearms to Washington, and even arrest and kill lawmakers as “aspirational,” not serious plans to break the law. Defendants have echoed that assessment. “It was a protest that became a riot,” argued the defense lawyer for Paul Allard Hodgkins, 38, before a federal judge in July. Hodgkins was sentenced to eight months in prison. Said his lawyer: “If we’re going to label this protest as domestic terrorism then please consider this: Where do we draw that line?”

The effort to do so has challenged the Justice Department. Although some in the mob belonged to extremist groups like the Oath Keepers, more than 20 of whose members are facing federal charges including conspiracy, the majority did not have ties to such groups or the organized plots investigators say they have uncovered. Absent evidence of hidden criminal plans, the feds have relied on the rioters’ own words to establish motive, in some cases citing social media posts in which participants said they were prepared to commit violence.

Authorities also have weighed rioters’ behavior when they returned home. Did they brag about their exploits, or show remorse and acknowledge the gravity of what they had done? At a hearing in early December, a federal judge read out a Pennsylvania man’s Facebook post bragging, “Overall I had fun lol,” before sentencing him to 30 days. These kinds of posts made it “extraordinarily difficult” to show him leniency, U.S. District Judge Amy Jackson said. “The ‘lol’ particularly stuck in my craw because, as I hope you’ve come to understand, nothing about Jan. 6 was funny,” Jackson said. “No one locked in a room, cowering under a table for hours, was laughing.”

The FBI is still asking the public to help identify at least 350 people “believed to have committed violent acts” at the Capitol. But many Americans appear to have moved on. The number of Republicans who said they thought it was “very important” to prosecute those who broke into the Capitol dropped from 50% in March 2021 to 27% in September, according to a Pew Research poll. “There is no public outcry demanding that the government continue to comb through every snippet of video from Jan. 6, 2021, seeking people to indict,” the lawyer for Patrick McCaughey, a Connecticut man charged with assault, said in March. She called the investigation “the largest political witch hunt in DOJ history.”

A September “Justice for J6” rally in support of those arrested attracted only a few hundred supporters in Washington, D.C., yet the view of charged insurrectionists as “political prisoners” has become a popular rallying cry on social media. In November, a three-part documentary series released by Fox News host Tucker Carlson reframed the events of Jan. 6 as a “false flag” operation set up to trap and “purge” Trump supporters in a “new war on terror.” In September, Trump himself released a statement in support of the Jan. 6 protest, saying, “Our hearts and minds are with the people being persecuted so unfairly relating to the January 6th protest concerning the Rigged Presidential Election.”

It’s a narrative that resonates for those Americans struggling to reconcile the actions of their friends, family and neighbors with the larger forces that brought the mob to the Capitol. On Dec. 22, in a courthouse in Miami, Courson’s lawyer argued he had wanted only to attend Trump’s widely publicized rally, not participate in a violent event. “This became a chaotic situation,” he said. “Emotions took over for most of these folks, and they found themselves in a situation that they never intended.”

The judge admitted it was hard to assess Courson’s actions as an individual compared with those of the larger group, yet ultimately ordered him detained prior to trial, citing his direct participation: “There’s no way to interpret this offense other than that the Defendant engaged in an armed insurrection against the United States and against the very heart of our democracy.” But for many Americans, the case is still open.

—With reporting by Mariah Espada 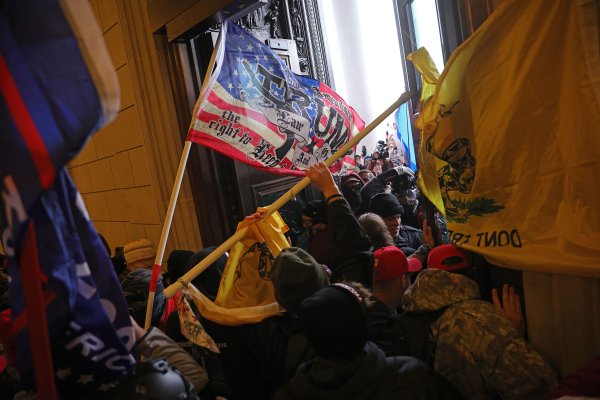 January 6 Changed How the Far Right Organize
Next Up: Editor's Pick