The House committee investigating the January 6 attack on the Capitol has been tearing it up. They worked straight through the holidays, including on Christmas and New Year’s Day. They’ve interviewed 300-plus witnesses, pursuing those who disobey their subpoenas. In fact, the committee’s work looks a lot like what we might expect a criminal investigation to look like—so much so that Trump’s lawyers are trying to fend off the release of his presidential papers to the committee on the basis that the committee may use them to make criminal referrals to the Department of Justice.

In the meantime, before today’s speech by Attorney General Merrick Garland, we haven’t heard a lot about high-level January 6 investigations from DOJ. We know from the department’s year-end press release that more than 725 cases are in progress. They range from misdemeanors to assaults against Capitol police officers to interference with Congress’s certification of the 2020 election. Some defendants, including members of extremist groups, have been charged with conspiracy. But if you were looking for clear signs that DOJ is investigating those most responsible for the attempt to interfere with the smooth transfer of power, you’d have been hard-pressed to find any. No witnesses protesting grand-jury subpoenas, no leaks of information to the press. Some have suggested Garland’s Justice Department wouldn’t pursue those who are most culpable out of misplaced sentiment that such prosecutions would smack of politics, calling the attorney general feckless and the wrong man for the job.

There were some clues DOJ might be investigating. The same year-end press release noted, “The Department of Justice’s resolve to hold accountable those who committed crimes on Jan. 6, 2021, has not, and will not, wane.” DOJ speaks in a restrained voice when commenting on investigations, because investigations don’t always culminate in prosecutions. That’s how we should want our justice system to work—we want investigators to gather evidence and learn the truth before making decisions about whether the law and the facts warrant prosecution. DOJ conducts its criminal investigations, frustratingly for the public, in secrecy. This serves justice both by protecting the reputations of those who are never charged and maximizing investigators’ ability to obtain evidence. Garland, who oversaw notoriously close-hold investigations including Oklahoma City and the Unabomber in his earlier stint in the department, knows this. So, while some DOJ watchers believe they would see signs of high-level investigations in process, that’s not necessarily true.

Garland seemed to confirm investigation was in progress today, making an important commitment after recapping the department’s prosecutions to date: “The actions we have taken thus far will not be our last. The Justice Department remains committed to holding all Jan. 6 perpetrators, at any level, accountable under law—whether they were present that day or were otherwise criminally responsible for the assault on our democracy. We will follow the facts wherever they lead.” Garland is saying that no one is above the law, not even a former president. He’s also answering concerns that his focus is limited to events on Jan. 6, not to the ongoing effort to prevent the transfer of power. This is a key point—Jan. 6 was the culmination of the effort to interfere with the outcome of the election, and it would be a swing and a miss if DOJ focused exclusively on that one day.

As for those who have criticized him for moving too slowly, Garland admonished that his work would take “as long as it takes and whatever it takes for justice to be done–consistent with the facts and the law.” Prosecutors who have worked on complicated investigations, especially when the law requires proof of a defendant’s state of mind, will understand this for the hard-nosed nod to reality that it is. These cases take time. Even when prosecutors are working at full speed, the evidence does not fall into place overnight. And yet given his discussion of voting rights, it’s clear that Garland is mindful of the clock that is ticking on democracy. Prosecutors understand that justice unnecessarily delayed is justice denied.

Garland’s job today was to close the trust gap that has developed between his Justice Department and the country, speaking to people who have lost faith that the rule of law has enough grit left to hold a former president, one with nothing but disdain for it, accountable. At the same time, Garland knows there is a significant percentage of the country that believes the lies Trump peddles about the election. Those people will believe that any investigation, let alone prosecution, is politically motivated.

Garland has undoubtedly struggled with that problem. But DOJ’s mission is to do what is right, not what is politically expedient. Acting with reserve to avoid the appearance of political interference at the department is a laudable goal, but DOJ’s moral imperative is to unflinchingly prosecute if–and it’s still a big if–there is sufficient admissible evidence to prove serious crimes beyond a reasonable doubt. Failing to do so in the face of provable interference with a presidential election would end any claim that our legal system operates on the principle that no man is above the law. And Garland, it appears, is not willing to relegate the country to that fate.

Read More: Jan. 6 Changed How the Far Right Organize, Not What They Believe

Some of the facts are already clear. Democrats didn’t steal the election, but Trump tried to. He is captured on tape cajoling and threatening Georgia’s secretary of state to find him the 11,780 votes he needed for a victory in that state. He explicitly pushed the discredited narrative of the big lie on the country. And he sat in front of his television, doing nothing to end the violence, for more than three hours as the Capitol was overrun, police officers were attacked and our elected officials, including his own vice president, were at risk of harm. Those matters should all be investigated. And it should not fall on state and local prosecutors, or even the capable shoulders of the House committee investigating Jan. 6, to do the heavy lifting in the matter of a failed presidency.

But it’s premature to ask the attorney general to promise indictments before all of the evidence is in. So Garland must navigate the challenge of restoring trust with a nation that is wary of DOJ after living through the excesses of the Trump Administration. He must find a path to convince people to have faith in him in the absence of a guarantee that DOJ will prosecute the people responsible for the near decimation of our democracy. That means he has the ongoing job of convincing them that, for now, investigation is enough. And that’s not an easy sell.

Yet if the past year has taught us anything, it’s that neither law enforcement nor the public has a full understanding of complicated events immediately upon their conclusion. Not even when we watch the final act unfold before our eyes. As the House investigation proceeds, we are learning that there is a lot lurking beneath the surface. Hundreds of witnesses and thousands of pages of documents with new, but critical, details are still coming to light. DOJ may benefit from the evidence the committee is accumulating. DOJ can’t decide to prosecute (or not) prematurely.

Criminal cases aren’t easy. Prosecutors can’t bring a case because “everyone knows what Trump did.” It takes evidence that is admissible in court under strict federal rules. There must be proof beyond a reasonable doubt of each element of a crime. And prosecutors must be prepared not just to obtain a conviction at trial but to defend it on appeal. That means they must avoid stretching into novel legal theories that are vulnerable to being reversed. These difficulties don’t mean DOJ can avoid its responsibilities. They mean it must perform them diligently and properly.

Read More: January 6th May Have Been Only the First Wave of Christian Nationalist Violence

Garland made a start on rebuilding trust with Americans today. But he will have to commit to and continue to work on the relationship. Although it’s impossible and perhaps unfair to criticize and assess Garland’s decisions until his work is concluded and we know the outcome, he’s asking us to rely on him while we wait. We don’t know exactly what he is and isn’t doing. It’s hard to avoid the concern the former president will, yet again, escape accountability, which would destroy many Americans’ confidence in the rule of law.

An operating principle for prosecutors is that if you’re going to shoot at the king, you’d best not miss. It’s always much easier to be an armchair prosecutor than to prove a case in the courtroom and convince a panel of judges on appeal that the defendant’s legal rights were all in place. DOJ must get the Jan. 6 prosecutions right because they are all that stands between our democracy and those who would take it away from us. So DOJ had best not miss. Garland said enough today to allay concerns that DOJ would miss because they weren’t going to take the shot. Now it’s up to him to convince us he’ll take the right ones. 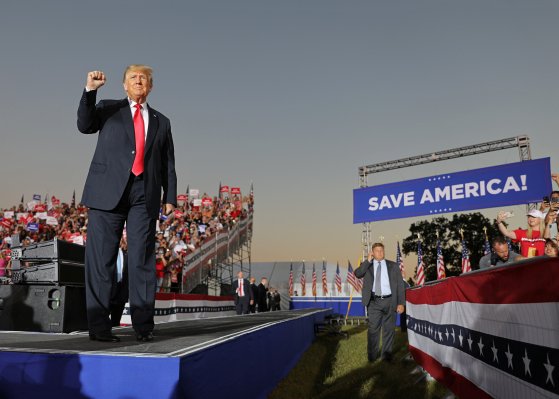 How Donald Trump Turned Jan. 6 into a Windfall
Next Up: Editor's Pick