What the Jan. 6 Committee Has Done So Far

When a bipartisan House committee began investigating the Jan. 6 insurrection, its goal was simple: compile a detailed account of what happened, and make recommendations to ensure it never happens again. But piecing together the facts of how that day unfolded has proved to be a daunting task. So far, the select committee has obtained more than 30,000 records, interviewed over 300 witnesses and issued subpoenas to dozens of former President Donald Trump’s allies—yet its work remains far from complete.

Members of Trump’s inner circle are refusing to cooperate with the investigation, and the committee is waiting to see whether the Supreme Court will deny the former President’s request to block access to White House records related to the riot. Lacking crucial evidence, the nine-member House panel hopes to finish its work before the Nov. 8 midterm elections, when Republicans could win back control of the House and dissolve the committee.

What new evidence have they found?

The biggest source of evidence uncovered by the panel is some 9,000 pages of documents that White House chief of staff Mark Meadows turned over before he decided to stop cooperating. Among them are text messages to Meadows that have brought new focus on Trump’s failure to act quickly to stop the insurrection, despite pleas from lawmakers, journalists and even his eldest son. “Someone is going to get killed,” one anonymous message warned Meadows. “He’s got to condemn this sh-t ASAP,” Donald Trump Jr. wrote.

Investigators are also reviewing a PowerPoint presentation­ circulated­ by Phil Waldron, a retired colonel who worked with Trump’s outside legal team, that recommended Trump declare a national emergency to keep himself President and proposed Vice President Mike Pence reject electors from “states where fraud occurred,” despite there being no evidence of such fraud.

What have they done?

So far, the committee has subpoenaed around 50 Trump allies and rally organizers for documents, phone records and bank statements. Most witnesses have cooperated, but three former Trump aides have refused to comply with the records request: chief strategist Stephen Bannon, Justice Department official Jeffrey Clark and Meadows. The House voted to hold Bannon and Meadows in contempt of Congress, a misdemeanor criminal offense that can result in up to one year in prison. In December, the panel requested interviews with Republican Representatives Scott Perry of Florida and Jim Jordan of Ohio, who reportedly communicated with Trump on Jan. 6.

Investigators have also suggested subpoenaing Trump to answer questions before the committee. Experts warn he’s unlikely to speak as long as the courts are considering his claims of Executive privilege, a legal defense Trump is trying to use to shield his presidential communications, despite no longer serving in office.

One of the most critical ­questions the panel will try to answer is whether Trump’s conduct while a mob of his supporters overtook the Capitol could qualify as an effort to obstruct the certification of Joe Biden’s victory and amount to criminal obstruction of Congress. “We know hours passed with no action by the President to defend the Congress of the United States from an assault while we were trying to count electoral votes,” GOP Representative Liz Cheney of Wyoming said to House colleagues on Dec. 14.

While courts have held in the past that Congress cannot conduct a law-enforcement investigation, law­makers can share the results of their probe with the Justice Department if they believe they have uncovered evidence of a crime. Such a criminal referral could affect the midterms, and increase pressure on Attorney General Merrick Garland to prosecute Trump and his allies for their role in the insurrection.

But time is short. Committee chairman Representative Bennie Thompson, a Democrat from Mississippi, said he hopes to finish by early spring. “We will tell this story to the American people. But we won’t do it piecemeal,” he said on Dec. 13. “We’ll do it when we can tell the story all at once, from start to finish.” 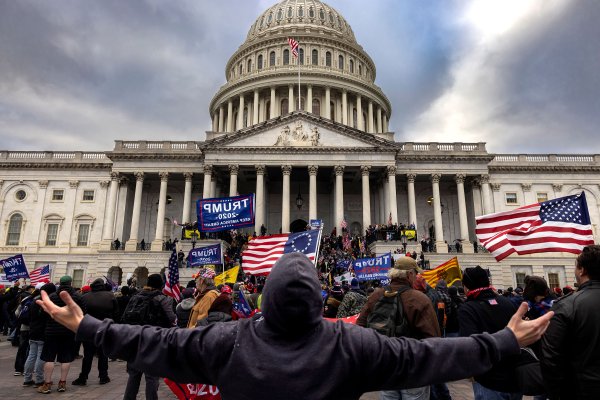 For the Jan. 6 Rioters, Justice Is Still Coming
Next Up: Editor's Pick