Watching Asghar Farhadi’s A Hero—Iran’s official Academy Awards entry, and last year’s Grand Prix winner at Cannes—you’ll understand the ambiguity of the film’s title almost immediately. The man at the film’s center, complex and erratic, is Rahim (Amir Jadidi), who’s serving a prison sentence for failure to pay off a debt. As the movie opens, he’s beginning a two-day leave—the prison where he’s incarcerated will allow inmates an occasional respite, though it’s possible that coming back after having tasted freedom may be harder than being stuck there in the first place. Rahim has a specific purpose for these precious 48 hours: he’s hoping to secure his freedom by paying off that debt. His first stop is Persepolis, in Shiraz. There’s some restoration underway at the sacred site, and his brother-in-law, Hossein (Alireza Jahandideh), is one of the workers. Rahim laboriously ascends the scaffolding covering the sheer rock face containing the royal tombs; it’s no small irony that mere mortals can’t reach this place of ancestral honor without a great deal of huffing and puffing.

Rahim tells Hossein he has a get-out-of-jail plan, though he withholds the specifics. Later we learn that it involves a purse full of gold coins which Rahim’s fiancée, Farkhondeh (Sahar Goldust), has found on the street. Rahim and Farkhondeh bring the coins to a dealer, only to learn that selling them won’t bring in nearly enough to pay what’s owed. At that point, Rahim begins to feel guilt. That gold belongs to someone else, someone who’s surely missing it. He decides to find the rightful owner, and after a woman tearfully reclaims her missing property, Rahim is treated as a hero, a selfless individual who returned valuable goods that could have turned his life around.

Rahim’s fortunes take a dramatic turn for the better, until his story of the lost-and-found purse—a narrative built of wobbly semi-facts, though not exactly lies—begins to unravel. A Hero is a story of a naïve man who makes some bad choices, of angry people whose refusal to forgive results only in their further calcification as human beings, and of family networks that generally offer strength and support, though there’s always the risk of condemnation as well. It’s also a parable, of sorts, about how quickly social media can destroy lives. Rahim has a young son (played by Saleh Karimai) from a previous marriage. It turns out that Rahim’s creditor, Bahram (Mohsen Tanabandeh), is his ex-wife’s brother, and for reasons that are never explained, he has it out for Rahim; it seems he’d prefer to see Rahim rot in jail than get his money back, and he comes into possession of a cellphone video that could bring Rahim further ruin.

Bahram’s intransigence only makes Rahim more desperate, leading him to rash actions that might make you want to yell at the screen. This seems to be by design on Farhadi’s part: his movies—including two Oscar winners, A Separation (2011) and The Salesman (2016)— focus on people doing their best under difficult circumstances, often making choices that aren’t correct in any clear-cut way. Rahim, though honest at heart, seems willing to stretch the truth to achieve his ends, and Farkhondeh is all too willing to comply. At times, Rahim’s son, who’s working to overcome a stuttering problem, seems to be something of a pawn in the couple’s eagerness to win Rahim’s freedom; he’s the character with the most at stake—or he’s at least the most vulnerable—though the movie doesn’t overtly recognize that. Instead, Farhadi works harder at soliciting our compassion for Rahim, flaws and all, asking us to acknowledge the numerous forces working against him.

As usual for Farhadi’s films, A Hero is beautiful to look at. Even the interior scenes are brushed with a golden light, and sometimes that light feels like a benediction. But as humanist works go, A Hero demands extra measures of patience on the viewer’s part. Rahim isn’t always easy to like, and though we know a little about why he fell into debt in the first place—a calligrapher by trade, he lost work as printed signs took precedence over hand-lettered ones—it’s hard not to wonder if his somewhat elastic sense of the truth didn’t contribute at least partly to his troubles in the first place. But Farhadi does make one thing clear: Rahim is eager to change, to become a better man, whatever that truly means. It’s the small gestures, not the big ones, that make the most difference in an ordinary life. And once Rahim reckons with that truth, the movie’s title becomes less ambiguous and more reflective of what everyday heroism means. It’s a thing measured out not in brave strides, but in baby steps. 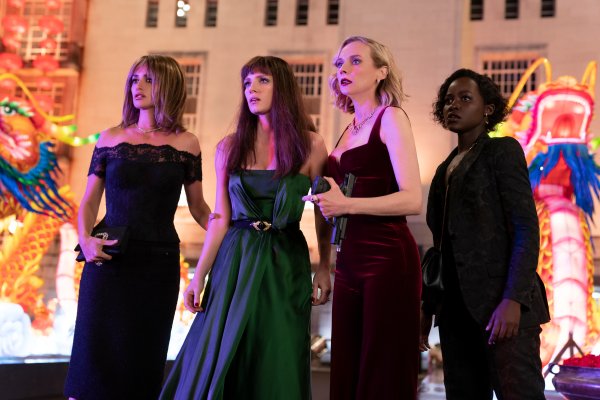 Spy Thriller The 355 Has the Right Ingredients, But They Never Come Together
Next Up: Editor's Pick