Desmond Tutu, Anti-Apartheid Campaigner Who Tried to Heal the World, Dies at 90

South African anti-apartheid campaigner, Nobel Peace Prize laureate and Archbishop Emeritus Desmond Tutu, one of the world’s most revered religious leaders, died in Cape Town on Sunday at age 90, bringing to an end an extraordinary life filled with courage, love and a passion for justice.

Ramaphosa paid tribute to Tutu’s work, both in ending apartheid and in fighting for human rights everywhere: “A man of extraordinary intellect, integrity and invincibility against the forces of apartheid, he was also tender and vulnerable in his compassion for those who had suffered oppression, injustice and violence under apartheid, and oppressed and downtrodden people around the world.”

A globally recognized icon of peaceful resistance to injustice, Tutu is best remembered for his courageous leadership of the Anglican Church in South Africa even as he spearheaded the fight against apartheid. Like fellow human rights activists Mahatma Ghandi and Martin Luther King Jr., he used his religion as a platform to advocate for equality and freedom for all South Africans, regardless of race. He often noted that the apartheid system, while devastating for South Africa’s blacks, was nearly as corrosive to the spiritual, physical and political development of the white population it was supposed to protect. “Whites, in being those who oppress others, dehumanized themselves,” he was quoted as saying.

Deftly wielding the Christian principles of love and forgiveness as a weapon in his fight to dismantle apartheid, he regularly, and publicly, prayed for the wellbeing of his opponents, even those who were most vociferous in their attacks against him. But even as he preached forgiveness, he was uncompromising when it came to his fundamental moral philosophy. “You are either in favour of evil, or you are in favour of good. You are either on the side of the oppressed or on the side of the oppressor. You can’t be neutral,” he wrote in a statement to the United States Congress in 1984. He expanded his thinking in later speeches and sermons, noting that “If an elephant has its foot on the tail of a mouse and you say that you are neutral, the mouse will not appreciate your neutrality.”

READ MORE: The Secret to Joy, According to the Dalai Lama and Desmond Tutu

It was a philosophy that continued to animate his activism long after the end of apartheid. When full democracy finally came to South Africa in 1994, Tutu applied his elder-statesman stature and boundless energy to advocate for social justice and equality globally, taking on issues of HIV/AIDS treatment and prevention, climate change and the right of the terminally ill to die with dignity. He became a globe-trotting peace advocate, pushing for justice, freedom and an end to conflict in Israel-Palestine, Rwanda, Burma and Iraq. He campaigned against the United States’ illegal detention of suspected terrorists in Guantanamo Bay, Cuba, and became an outspoken supporter of LGBTQ rights, even as he risked conflict with members of his own church. “Opposing apartheid was a matter of justice,” he said in 2006. “Opposing discrimination against women is a matter of justice. Opposing discrimination on the basis of sexual orientation is a matter of justice.” Though Tutu was routinely confronted with some of the most egregious aspects of human behavior at home and in his travels , he never lost his faith in his fellow man. “Despite all of the ghastliness in the world, human beings are made for goodness,” he once said.

His sermons, unfailingly lucid, penetrating and inspired, went beyond the homily of the day to encompass the news of the world. A tremendous orator, he wove jokes, observations and passion into his speeches, deftly conducting his audiences into a state of uproar over injustice. Once there, he gently directed the heightened emotions towards constructive action. As the title of his authorized biography, published to great acclaim in 2006, put it: He was a rabble rouser for peace. As Mandela said: “Sometimes strident, often tender, never afraid and seldom without humor, Desmond Tutu’s voice will always be the voice of the voiceless.”

Born on Oct. 7, 1931, to a school headmaster and a domestic servant in Klerksdorp, South Africa, Desmond Mpilo Tutu grew up to become a teacher like his father. But when the South African government started instituting discriminatory education policies that restricted black South Africans’ employment opportunities, he quit in disgust. In 1958 he enrolled at a theological college instead, and in 1961 was ordained as priest in the Anglican church. A year later he left South Africa to continue his studies in London, where he experienced, for the first time, a life of freedom from apartheid’s race-based restrictions. “I’m sure there was racism there,” he noted in his biography. “But we were protected by the church. It was marvelous. We didn’t have to carry our passes anymore and we did not have to look around to see if we could use that bath or that exit. It was a tremendously liberating thing.”

Tutu returned to Africa in 1975, and became the Anglican Bishop of the country of Lesotho. Two years later he returned to South Africa, where he was elected to become the first Black secretary general of the South African Council of Churches. His elevated position in the church enabled him to advocate for an end of apartheid while granting him a certain degree of protection from the South African authorities. With most of the leaders of the anti-apartheid movement jailed or in exile, Tutu become the movement’s de facto head, and a leading spokesperson for the rights of Black South Africans. His unstinting efforts to draw national and international attention to apartheid’s discrimination earned him the Nobel Peace Prize in 1984. The awards committee said it was meant, “not only as a gesture of support to him and to the South African Council of Churches of which he was a leader, but also to all individuals and groups in South Africa who, with their concern for human dignity, fraternity and democracy, incite the admiration of the world.”

Two years later he become the Archbishop of Cape Town, the first Black man to preside over the city’s two million-strong congregation. Right-wing white Christians protested outside the cathedral at his investiture, calling it the “death of the Anglican church.” As the church’s official residence was located in an area reserved for white residents only, the apartheid government asked him to apply for the status of “honorary white” so that he could reside on the premises. He refused.

Tutu’s receipt of the Nobel Peace Prize helped catapult South Africa’s anti-apartheid movement into a global cause. Nearly a decade’s worth of eloquent advocacy by Tutu and his supporters around the world brought the country’s government to its knees. In 1993 the apartheid system ended, South African blacks were given the vote, and in 1994 they elected Nelson Mandela as their first Black president. Tutu had the honor of introducing the new president to the nation. He has described that moment as one of the greatest in his life. “I said to God, ‘God, if I die now, I don’t really mind.’”

But Mandela had other plans for “The Arch,” as he was affectionately called, appointing him as head of a Truth and Reconciliation Commission tasked with investigating human rights abuses committed by both sides during apartheid. Tutu presided over the two and a half-year-long proceeding with his trademark grace, compassion and forgiveness, even though he sometimes collapsed into anguished tears upon hearing details of some of the worst atrocities.

Often called the “moral conscience of South Africa,” Tutu was also known to be a bit of a scold. He held all of the nation’s leaders to the highest standards, and made enemies of many in the African National Congress for his well-deserved criticisms of their failings. He derided Mandela’s successor, President Thabo Mbeki, for his denial of the country’s HIV/AIDS epidemic, and took on President Jacob Zuma for his “moral failings.” Even the leaders of neighboring countries were not spared: Zimbabwe’s former president, Robert Mugabe, once described Tutu as “an evil little bishop” for Tutu’s sermons against the Zimbabwean dictator’s kleptocratic rule.

In 2007 Tutu turned his exacting gaze against the Anglican Church, rebuking religious conservatives among the clergy for their attitudes against homosexuality. He told the BBC that the Church had failed to demonstrate that God is “welcoming,” and that he had felt saddened and “ashamed.” “If God, as they say, is homophobic, I wouldn’t worship that God,” he said. Later on he told supporters in Cape Town that he “would refuse to go to a homophobic heaven…. I mean I would much rather go to the other place.”

As a founding member of the Elders, an organization of former world leaders who work together to promote human rights and world peace, Tutu continued on his quest to put an end to injustice until he decided to retire from public life in 2010. “Instead of growing old gracefully, at home with my family, reading and writing and praying and thinking, too much of my time has been spent at airports and in hotels,” he said at the time. “The time has now come to slow down, to sip rooibos tea with my beloved wife in the afternoons, to watch cricket, to travel to visit my children and grandchildren, rather than to conferences and conventions and university campuses.”

Nonetheless, he emerged from his seclusion from time to time when he found it absolutely necessary. In 2017, he penned a chagrined letter to fellow Nobel Laureate Aung San Suu Kyi, calling on her to speak up for the rights of Rohingya in Myanmar, saying that said the “unfolding horror” and “ethnic cleansing” of the country’s Muslim minority had forced him to speak out. “I am now elderly, decrepit and formally retired, but breaking my vow to remain silent on public affairs out of profound sadness,” he wrote in a letter he posted on social media. “If the political price of your ascension to the highest office in Myanmar is your silence, the price is surely too steep.”

Tutu leaves behind his wife, Nomalizo Leah Tutu, four children, several grandchildren and a nation bereft of one of the most articulate voices for justice the world has ever seen.

In a 2014 speech advocating for the right to assisted death, the archbishop described the peaceful death and joyous funeral he hoped to have for himself. He said that he would like to be cremated, despite knowing that it made some people uncomfortable, and that he would like to have his ashes interred at St. George’s Cathedral in Cape Town. He wanted a simple coffin, he said, one that would serve as an example to others of the importance of frugal funerals: “My concern is not just about affordability; it’s my strong preference that money should be spent on the living.”

Most of all, he concluded, he wanted his death to be seen not as an occasion for sadness, but as the natural conclusion to the arc of his extraordinary life. “Dying is part of life,” he said. “We have to die. The Earth cannot sustain us and the millions of people that came before us. We have to make way for those who are yet to be born.” 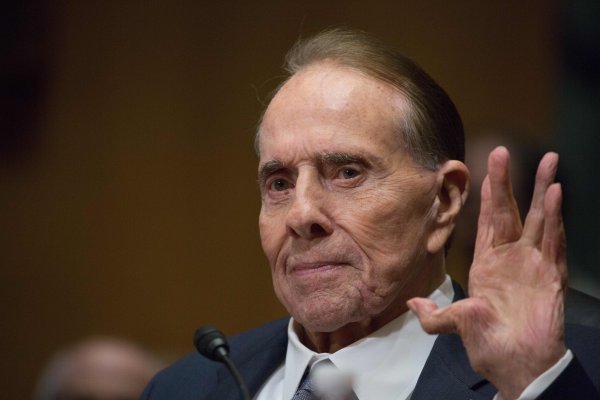 Bob Dole Lived With a Disability for Decades. Here's How It Shaped His Life and Legacy
Next Up: Editor's Pick