Robert Mugabe, Zimbabwean Revolutionary Who Later Ruled With an Iron Fist, Dies at 95

Robert Mugabe, the former freedom fighter-turned-wily and ruthless autocrat who ruled the southern African nation of Zimbabwe for 37 years before he was forced out in 2017 following a military takeover, died Friday. He was 95 years old.

“It is with the utmost sadness that I announce the passing on of Zimbabwe’s founding father and former President, Cde Robert Mugabe,” President Emmerson Mnangagwa said in announcing the death on Twitter. “Mugabe was an icon of liberation, a pan-Africanist who dedicated his life to the emancipation and empowerment of his people. His contribution to the history of our nation and continent will never be forgotten. May his soul rest in eternal peace.”

Mugabe came to power in the wake of Zimbabwe’s battle for independence from Britain in 1980, promising prosperity and democracy only to undermine both in his single-minded pursuit of political dominance. Though initially celebrated as a liberator, the Savile Row-suited (at least until international sanctions put a stop to his frequent U.K. visits) dictator’s most enduring legacy is a once-promising nation crippled by corruption and mismanagement.

Mugabe was the only leader Zimbabwe had known until Vice President Mnangagwa succeeded him in elections in 2018. A year later, the country still staggers under massive debts, a worthless currency and an impoverished population, all directly related to Mugabe’s time in power. Residents of the capital, Harare, only have access to running water once a week, and many rural communities have no electricity at all. The education system, once the best in southern Africa, has collapsed.

Mugabe’s death follows an extended stay in a Singaporean hospital, where he was being treated for an undisclosed condition that, over the last few years of his life, required annual trips abroad for health care. His treatment abroad earned him criticism at home as Zimbabwe’s public health system crumbled for lack of government investment.

The confirmation of Mugabe’s passing puts an end to persistent speculation. Rumors of his death were so frequent in Zimbabwe that he once bragged about besting Jesus: “I have died many times—that’s where I have beaten Christ. Christ died once and resurrected once,” he said on his 88th birthday. In September 2016, just after another such rumor sent Twitter into a tailspin, he told reporters, with his signature Cheshire-cat grin, “It is true that I was dead. And I resurrected. As I always do.” Nonetheless, Mugabe’s final days in power were marked by a visible decline: At the opening of Parliament in September 2015, he launched into the same State of the Nation speech he had delivered just a few weeks prior. Assembled parliamentarians either didn’t notice, or didn’t dare comment, until he was finished.

Catching the nonagenarian’s frequent stumbles and gaffes became something of a two-edged sword for Zimbabwe’s beleaguered media—lapped up by citizens desperate for signs of the end of his reign, but cause for government retaliation as well. When Mugabe tripped and fell on the red carpet at the Harare airport upon his return from a meeting at the African Union, local papers covered the incident, but heralded it as a sign of his continued good health: “President Mugabe showed that he is mentally agile by having the reflexes to break that fall and that he is physically fit by walking away unscathed,” was the pro-government Sunday Mail’s take. “The incident proved why Zimbabweans vote for him consistently: he is as mentally alert and physically capable as he has ever been.”

A ‘master politician’ and ‘tragic figure’

It was that deft wielding of rewards, and punishment, for supporters and detractors alike that put Mugabe in power and kept him there for so long, says Zimbabwean-born Charles Laurie, director and head of politics at the London-based Verisk Maplecrof risk analysis firm. Mugabe was a “master politician, and something of a tragic figure, never having been able to escape his own ambitions,” says Laurie. “If Mugabe had left office in a peaceable and timely manner, he would be regarded as one of the icons of the African political scene.” Instead, he used his skills to manipulate elections and extend his terms long beyond those mandated by Zimbabwe’s constitution, according to Laurie. “The essence of his rule is the single-minded purpose of him remaining in power, and the willingness to use all means to achieve that goal.”

Mugabe won his last presidential term in 2013, with 62% of the vote in an election that was widely considered to be fraudulent and unfair. When street protests fueled by social media threatened Mugabe’s grip on power in late 2016, he retaliated in characteristic style, cracking down with brutal force and driving protest leaders into exile.

Educated at missionary schools in what was then known as the English colony of Rhodesia, Mugabe went on to study at Fort Hare University in South Africa, where he first encountered the revolutionary politics of the African National Congress. Mugabe’s newfound political activism earned him a decade-long prison term for sedition a few years after he returned to Rhodesia in 1960. Upon his release in 1974, he fled to neighboring Mozambique, from where he launched a guerrilla war against Rhodesia’s white-supremacist government, which ended with independence in 1979.

When Mugabe became Prime Minister of the newly named Zimbabwe in April 1980, he surprised his former foes by calling for a policy of reconciliation and even appointing some white Zimbabweans to his government. “If yesterday I fought you as an enemy, today you have become a friend,” he said in a national radio broadcast. “If yesterday you hated me, today you cannot avoid the love that binds me to you.” In 1981, he was nominated with Britain’s Foreign Secretary Lord Carrington for a Nobel Peace prize for their work in bringing about the Rhodesian peace settlement, but was passed over in favor of the United Nations’ refugee commission.

Mugabe’s push for peace ended abruptly in 1982 over a political fallout with fellow freedom fighter Joshua Nkomo, with whom he shared a coalition government. Mugabe sent his notorious Fifth Brigade to crush an armed uprising by Nkomo’s minority Ndebele tribe, resulting in the deaths of thousands in what has been described by many observers as ethnic cleansing. Still, Mugabe remained a darling of the West for turning Zimbabwe into one of the healthiest, best-educated and economically successful countries on the African continent at the time. In 1994, Britain’s Queen Elizabeth knighted him.

But the adulation didn’t last. By the time he became president in 1987, corruption and nepotism had started to erode those early successes. In 2000, Zimbabwe’s economic growth had slowed substantially, and Mugabe encountered growing political opposition. In response, he launched a populist land reform program, expropriating white-owned farms and giving them to landless supporters and war veterans under the guise of correcting Zimbabwe’s colonial inequalities. The economy went into free-fall, and inflation spiked — the central bank started issuing billion-dollar bank notes, and a hamburger went for 15 million Zimbabwean dollars. National elections in 2008 were marked by fraud, deadly violence and a severe repression of the media. Mugabe was eventually forced into an uneasy power-sharing government with Morgan Tsvangirai, widely seen as the real winner, but by then Mugabe had lost whatever credibility he had left in the international arena. His knighthood was rescinded, and he was slapped with targeted sanctions that prevented him from going to many countries in Europe and the U.S.

Zimbabwe’s economy never recovered, buffeted by a loss of investor confidence, debt, financial fraud and now drought. Corruption monitoring group Transparency International estimates that Zimbabwe is losing at least $1 billion a year to graft. According to the World Bank, one fifth of the population lives in extreme poverty. Nonetheless, Mugabe continued to celebrate his February birthdays in lavish fashion, serving feasts of elephant, buffalo and even lion meat to crowds of cronies numbering in the tens of thousands, even as five million of his subjects faced food shortages.

Until the very end of his reign, Mugabe played potential successors off each other, testing loyalties and setting the stage for a pitched conflict between his glamorous wife, Grace Mugabe, Vice President Mnangagwa, and his former Vice President, Joyce Mujuru, whom he had removed from power in 2014. But that strategy finally backfired in 2017, when the Zimbabwean army, alarmed by his wife’s growing influence, staged a soft coup, putting Mugabe under house arrest and forcing him to submit a letter of resignation to Parliament on November 21, 2017. “My decision to resign,” wrote the President, “arises from my concern for the welfare of the people of Zimbabwe and my desire to ensure a smooth, peaceful and non-violent transfer of power that underpins national security, peace and stability.” As the speaker of the house read it aloud, parliamentarians cheered.

Zimbabweans had every reason to celebrate the end of an era defined by economic mismanagement, government corruption and human rights abuses, but after nearly four decades of dictatorship, expectations of rapid improvement in the country’s economy and political direction went unmet. Mugabe’s successor, former Vice President Mnangagwa, promised a new leaf upon his election to the presidency in 2018, but conditions have only worsened. Comrades-in-arms during the independence struggle, Mnangagwa and Mugabe worked side by side for much of the President’s reign. In a diplomatic cable posted on Wikileaks in 2000, the U.S. State Department noted that Mnangagwa was “widely feared and despised throughout the country” and “could be an even more repressive leader” than Mugabe.

Mugabe’s death, says analyst Laurie, is likely to launch a period of intense introspection in Zimbabwe, and around the world. As a Marxist revolutionary who faced prison and risked death in the fight for justice and the independence of his nation, Mugabe well deserves the accolades of his citizens. For his whole-hearted promotion of reconciliation instead of retribution a good decade before Nelson Mandela espoused the same philosophy for a post-apartheid South Africa, Mugabe became an international example of enlightened leadership.

But his addiction to power proved his undoing. Mandela and Mugabe were both prisoners-turned-presidents, but where Mandela stood down after one term in office, Mugabe clung to power until the bitter end. Had he followed Mandela’s example, he would have remained a hero. Instead Mugabe will be remembered as the despot who turned one of the most promising nations of Africa into a failing state. “The trouble with Mugabe,” Mandela once famously said, “is that he was the star—and then the sun came up.” 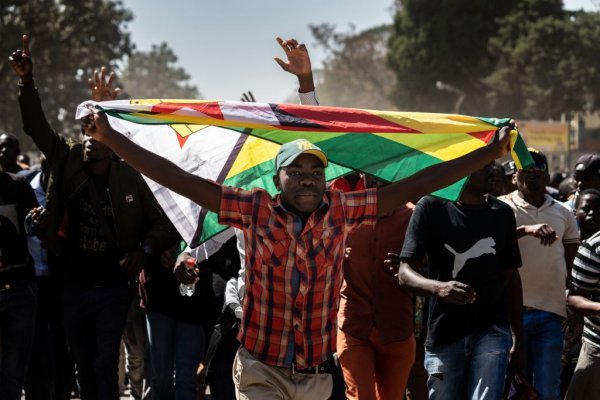 Activist: Violence in Zimbabwe Is Escalating. But We Won't Stop Fighting for Our Freedoms
Next Up: Editor's Pick