The report makes clear that the full number of fatalities is likely much higher still; the deaths of trans and gender non-conforming people are often underreported, and the victims themselves are often misgendered. (At least 24 of those listed in HRC’s report were initially misgendered by the media or police.)

Read more: Why This Trans Boy Had More Rights a Century Ago Than Many Trans Children Today

Tori Cooper, the director of community engagement for the transgender justice initiative at the HRC Foundation, says HRC not only noticed a rise in fatal violence, but an “increase in violent acts, period.”

HRC recorded fatal incidents in at least 19 states and Puerto Rico this year; Cooper says HRC has noticed a rise in fatal violence across the South, particularly in Texas, Florida and Georgia. (Texas and Florida were two of three states—along with Pennsylvania—which recorded at least five deaths.)

Since 2013, HRC has documented 256 incidents of fatal violence against trans and gender-nonconforming people. Over three quarters of victims in that period were 35 years old or younger, and one in ten was under 21. And Black trans women were disproportionately the victims of fatal violence this year, as well as in years past—in the years since HRC has been keeping record, at least 84% of those killed were people of color, 85% were trans women and 66% were Black trans women.

There could be several factors contributing to the rise in violence, Cooper says. Systemic racism and transphobia exacerbates poverty and directly impacts the lives of many trans individuals, she explains. There has also been a rise in anti-trans disinformation in the media and from conservative lawmakers. This year, at least 130 bills were introduced into state legislatures that targeted trans people, including the ability of trans kids to use the bathroom, play sports or receive medical care. A record-breaking 25 anti-LGBTQ bills were ultimately enacted into law, including 13 anti-trans laws in at least eight states, per HRC’s count.

Legislation at the federal level that Cooper says is desperately needed to better protect trans people, meanwhile, is currently stalled. Cooper argues that Congress must pass the Equality Act, which would outlaw discrimination on the basis of gender identity or sexual orientation in employment, housing, public accommodations, education, federally funded programs, and more. She adds that there needs to be focus on addressing the threat of hate crimes, and more enforcement of hate crime laws already on the books.

“We need to make sure that folks who commit hate crimes are prosecuted accordingly,” she continues. “That means that they are understanding that they cannot inflict pain upon communities of people simply because they are different.” 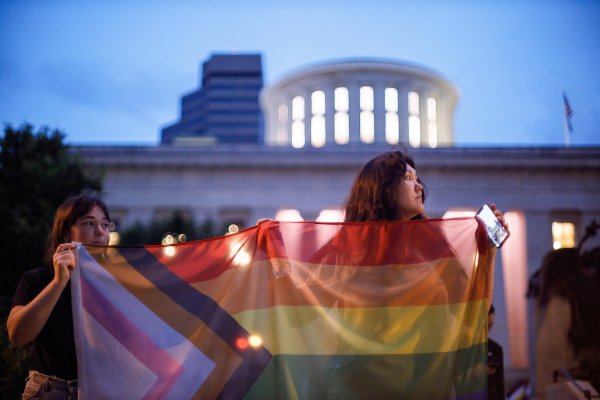 Gender-Affirming Hormone Therapy for LGBTQ Youth Can Help Save Lives, Study Finds
Next Up: Editor's Pick