Did We Just Blow Our Last, Best Chance to Tackle Climate Change?

In mid-2020, after the pandemic had settled in, I wrote in a TIME cover story that the stars had aligned to make 2020 and 2021 the “last, best chance” to keep the world from experiencing the worst impacts of climate change. Temperatures have risen more than 1.1°C since the Industrial Revolution, and the COVID-19 pandemic had unexpectedly opened up new pathways to rethink the global economy to help the world avoid the 1.5°C of temperature rise, long seen as a marker of when the planet will start to experience the catastrophic and irreversible effects of climate change.

Now, 18 months later, the world seems poised to blow it. Governments across the globe have failed to spend big on a green economic recovery. Political leaders from the world’s largest economies have made lofty promises to eliminate their carbon footprints but failed to offer concrete policies to get there. And President Joe Biden’s ambitions for bold climate legislation have been stymied in Congress.

“We’re sort of standing on the precipice,” says Rob Jackson, an earth system science professor at Stanford University and the chair of the Global Carbon Project. “I am loath to say it, but I’m deeply skeptical that we will reduce emissions fast enough to keep global temperatures from rising 1.5°.”

So with two landmark years for the planet—not to mention everyone who lives on it—in the rearview mirror, it’s worth looking at the missed opportunities. But it’s just as important to consider what comes next: missed chances cannot be viewed as an excuse to give up.

The most obvious—and perhaps easiest—opportunity to turn the COVID-19 pandemic into progress in the fight against climate change boiled down to dollars and cents. COVID-19 and the subsequent lockdowns shocked the economy, requiring governments to spend trillions to keep the wheels turning. Quickly hard-nosed analysts and idealistic activists alike said governments should focus that spending on initiatives that would foster clean energy and push polluting industries to transform.

This message caught on quickly, and a “green recovery” became a key talking point for heads of government from countries large and small. But, as the pandemic wore on, most of those policies failed to materialize. Only around 3% of the nearly $17 trillion countries have spent on recovery measures have been allocated to clean energy and sustainable recovery, according to an October report from the International Energy Agency. The challenge is particularly stark in developing countries where finding financing for clean energy can be difficult. Other analyses have been more optimistic—but only slightly so. The Organisation for Economic Co-operation and Development found in April that 17% of recovery spending would provide environmental benefits while another 17% was negative or mixed. The rest of it was neither, in effect meaning it propped up business as usual.

These numbers present huge challenges for progress on climate. First, building new fossil fuel-based infrastructure locks in a future for oil, gas and coal for decades to come. Countries are unlikely to spend millions on, say, a pipeline only to turn around and shut it down a few years later. Moreover, spending money on infrastructure is for many countries a zero sum game. Once the money is spent, it’s gone, and the opportunity to spend big again may not come back again for years or decades. “We’ve spent a lot of money very quickly,” says Jackson. “We won’t get that money back.”

Even before the pandemic, 2020 was meant to be a big year for action on climate change. Because of a cycle laid out in the 2015 Paris Agreement, countries were supposed to produce new climate commitments ahead of a key conference in Glasgow, Scotland, known informally as COP26.

Organizers of the summit—originally scheduled for the fall of 2020 and held a year later as a result of the pandemic—planned the talks with the hope that, when the summit concluded, country commitments would leave the world with a clear and viable pathway to keep temperature rise to 1.5°C. Two heated weeks of negotiations led to a complicated outcome. If you extrapolate from countries’ promises to eliminate their carbon footprints, temperature rise might be limited to around 1.8°C, according to an analysis from Climate Action Tracker.

Countries committed to “phasing down” coal and eliminating “inefficient” fossil fuel subsidies. Perhaps more importantly, countries said they would return next year once again with new policies to bring the world even closer to the 1.5°C. “Despite what I would describe as a fractured international politics more generally, we did have consensus,” says Alok Sharma, the British minister who served as COP26’s president.

But promises don’t mean much without policies to make them possible. Any leader can promise to, say, eliminate its carbon footprint by 2050. But to do so requires concrete policies like deploying clean energy or transitioning to electric vehicles. And, if you add up the real policies that drive enacted by countries by the middle of COP26, temperatures are expected to rise 2.7°C—a big gap from the 1.8°C suggested by the vague promises.

The outcome was better than many expected, but it seems fair to say that much work remains to be done to really put the world on a 1.5°C trajectory. “Is [the agreement] enough to hold global warming to 1.5°?” James Shaw, New Zealand’s climate minister, asked his counterparts at the end of the conference. “I honestly can’t say that I think that it does, but we must never, ever give up.”

The U.S. is the world’s largest economy and second largest greenhouse gas emitter after China, and so what happens in Washington matters a great deal for global efforts to cut emissions. As president, Donald Trump took the U.S. backward, slashing climate rules and taking the country out of the Paris Agreement, and slowed the rest of the world down at the same time. Biden came to office promising to recommit the U.S. to climate action. He put the issue at the forefront of his domestic and international agendas, and, in April, he made a key promise: to slash emissions by at least 50% by 2030 compared to 2005 levels.

The Biden Administration has described its strategy as an “all of government” approach, meaning every agency and official needs to consider how their work can help address the issue. But, despite a swathe of new rules and regulations targeting emissions, the Administration has hinged much of its agenda on a key piece of legislation dubbed Build Back Better.

The spending plan, which passed the House of Representatives in November, contains more than $550 billion in clean energy and climate investment that would promote the adoption of electric vehicles, invest in conservation efforts and provide tax incentives for clean energy. At a macro level, that kind of investment would be transformational. Several independent analyses have shown that when combined with other measures, like tighter efficiency rules for automobiles and another key infrastructure package which Biden signed into law earlier this year, the investment would allow the U.S. to meet Biden’s 2030 target.

Without it, or something of equal scale, the target remains an empty promise. “It’s impossible to get from here to there without these investments,” says John Podesta, the former advisor to Presidents Bill Clinton and Barack Obama who now works on climate issues, of the role Build Back Better bill plays in meeting Biden’s goal.

But on Dec. 19, West Virginia Sen. Joe Manchin told Fox News that he would not support the current version of the bill. Because the legislation needs support from every Democratic member of the Senate to pass, Manchin’s statement undermined both Biden’s climate agenda and global climate efforts more broadly. “If we don’t pass this, we basically have lost the war,” Sean Casten, a member of the House of Representatives from Illinois, told me earlier in December. “This is how we actually make sure that the fires, the floods don’t get worse every year.”

If all of this sounds depressing, it is. While keeping temperature rise to 1.5°C may still be technically possible, it becomes harder and harder to imagine leaders finding the political will to do so with each passing year. That means an increasing likelihood that we may soon trigger a tipping point that leads to non-linear changes—think of the melting of Arctic permafrost that releases huge quantities of methane, for example, that in turn leads to even faster warming.

Many who work on climate issues are hesitant to admit that critical threshold may already be behind us. Acknowledging that reality is often seen as tantamount to giving up.

But there’s another way to look at it. On a recent panel I moderated, Michael Greenstone, a University of Chicago economics professor who served as the chief economist on Obama’s Council of Economic Advisors, ran through his calculations of the damage done by each ton of carbon dioxide emitted into the atmosphere. His conclusion was simple: “Every ton matters.”

No matter how close we are to hitting 1.5°C of warming—or by how much we’ve passed it—every ton of carbon matters, as does every new effort the world makes in reducing the harm being done. The world came up short in 2020 and 2021. In 2022, leaders need to go back to the drawing board. 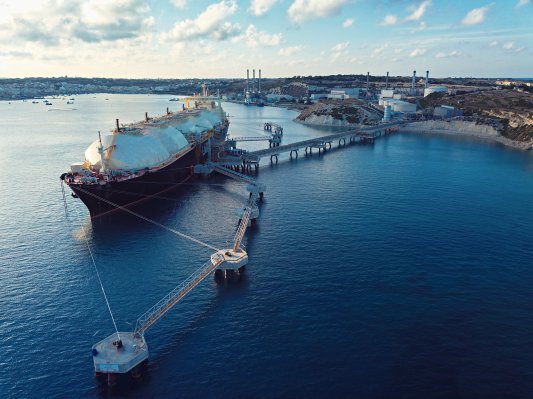 Company Accused of Greenwashing for 'CO2-Free' LNG Project
Next Up: Editor's Pick