COP26 Ends With Nobody Really Happy

Six years ago, when the hammer was gaveled and the Paris Agreement agreed upon, the negotiators gathered at the massive conference complex on the outskirts of Paris erupted in applause and left the city with a sense of optimism. Celebration ensued in bars across the city for the thousands who had traveled to Paris to push for a deal. The mood at the conclusion of COP26 in Glasgow was notably different.

On Saturday, as COP26 came to a close, delegates unanimously agreed to the Glasgow Climate Pact, an update to the Paris Agreement that targets coal-fired power and fossil-fuel subsidies, and calls on countries to produce more aggressive climate plans next year. These new agreements represent giant steps forward in international climate discussions—but few delegates were ready to celebrate openly. In statement after statement during the closing sessions, negotiators from countries around the world suggested that they were accepting the text in the “spirit of compromise” while lamenting that the deal did not go far enough. “The text represents the least-worst outcome,” James Shaw, New Zealand’s climate minister, told his counterparts on Friday.

Last summer, I wrote that a confluence of events including the U.S. presidential election, the massive spending on COVID-19 recovery measures and the impending Glasgow talks would make 2020-2021 most decisive years yet in the fight against climate change, during which the decisions made would determine whether the world will exceed the 1.5°C temperature rise mark that scientists say will trigger the worst effects of climate change.

At the close of COP26, we can take stock of how those two years have played out. Unfortunately, what has transpired isn’t exactly reassuring. To recover from COVID-19, governments around the world spent some $16 trillion on stimulus measures, but only 2% of that went to clean energy projects, according to the International Energy Agency. The U.S. presidential election replaced a climate-change denier with a president committed to addressing the issue—but much of his climate agenda has been hampered by politics.

The conclusions of COP, too, bring mixed messages. On the one hand, countries have all but universally signaled that fossil fuels are not the future. On the other, they have struggled to explain how the necessary transition to renewable energy will occur—both in terms of the technicalities of emissions reduction and how it will affect people and communities. “Is [the agreement] enough to hold global warming to 1.5°?” Shaw said. “I honestly can’t say that I think that it does, but we must never, ever give up.”

The negotiations at COP26 were never going to get the world to keep warming to 1.5°C on their own. Indeed, the central reason this conference was meant to be so significant is a requirement in the Paris Agreement that countries would submit new domestic climate pledges by the Glasgow COP. The hope was that this year’s conference would serve as a shared target, to galvanize countries to do their own work figuring out how to reduce emissions domestically in the period between the Paris and Glasgow conferences. But in the weeks leading up to Glasgow, it became clear those efforts would fall short. A report from the United Nations climate change body released in October ahead of the conference found that the commitments made ahead of COP26 wouldn’t come close to getting the world to meet the 1.5°C target; the UNFCCC projected that they would mean the globe was likely to see an average temperature rise of up to 2.7°C above preindustrial levels. A slew of announcements during the conference—from vague net-zero commitments to toothless deforestation promises—brought that number down in theory, but many analysts remained unconvinced that all of these pledges will actually result in real policy.

And so the talk in Glasgow turned towards the fact that the 1.5°C target was, as United Nations Secretary-General Antonio Guterres described it, on “life support.” Ultimately, the negotiators agreed to a measure calling for countries to strengthen their climate commitments and align them with the 1.5°C by next year. They also signed off on language that explicitly states the need to phase down fossil fuels—the first time that’s happened at any of these international events. The Glasgow Pact calls out fossil-fuel subsidies and coal-fired power as two specific targets that would help meet the temperature rise goal.

If you’re wondering why countries would do that next year when they didn’t this year, you’re not alone. Given the already deep urgency of climate change, it’s hard to imagine what more could move the needle. Jennifer Morgan, the head of Greenpeace International, says that the pressure on governments from activists and youth will only grow. “After this meeting, 1.5 is still barely alive,” says Morgan. “What would give me confidence is the people-power that exists around the world—and that is just growing…. it’s a chance to hold governments accountable to the promises that they have made on the world stage.”

It’s also true that as the COVID-19 pandemic eases, governments will have additional space—fiscal and otherwise—to delve more deeply into the nuts and bolts of climate policy. Over the last couple of weeks at Glasgow, on the sidelines of the formal negotiations, some encouraging signs emerged of nascent programs that might convince some countries to go further. For example, negotiators from the U.S., U.K., Germany, France and the European Union announced they are working on an $8.5 billion deal with South Africa to help it transition away from coal—that partnership that could serve as a model for other countries.

But for rich countries to win over their less-wealthy counterparts with those types of programs would likely require a broader effort to engender trust. In the final days of the talks in Glasgow, negotiations in large part centered around a push for rich countries to provide adequate funding for poor countries to adapt to the effects of climate change, and to help pay for the inevitable damages and financial losses of increasing droughts, floods, and other climate-related events. As representatives of poorer, more vulnerable countries have made clear, historical emissions of richer countries have largely fueled their accrual of wealth, while putting other parts of the world at risk to the effects of those emissions. The final deal includes a call to double finance for adaptation as well as a promise to work further on the issue of loss and damage.

Many critics of international climate talks will likely say none of this really matters when it comes to getting the world to slash emissions. Real action happens in response to economic factors—at manufacturing plants, in offices and with consumers—or at the very least in response to laws or rules. It’s true of course that the negotiators who gathered in Glasgow have no direct power to intervene on the ground in other countries, but collectively setting the direction can’t hurt. 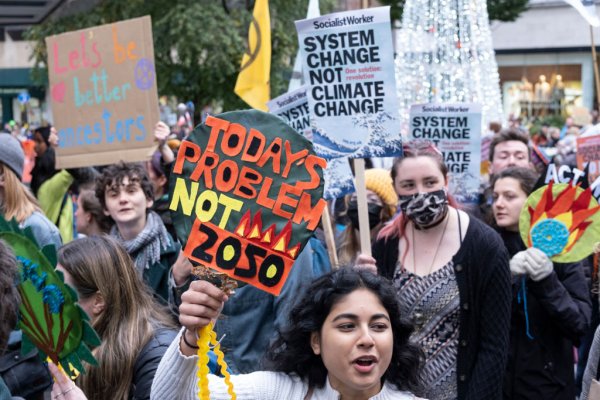 The Youngest Negotiating Team at COP26 has a Message for Other Countries
Next Up: Editor's Pick