It’s Shaping Up to Be a Tough 2022 for Joe Biden. Here Are His Biggest Challenges

Joe Biden enters his second year in office down in the polls, with a pandemic dragging on and nearly a third of Americans still hesitant to get vaccinated, a recovering economy strained by inflation and an unpredictable supply chain.

He’s presided over the roll out of trillions of dollars in healthcare funding and stimulus payments, seen the unemployment rate drop to 4.2%, made COVID-19 vaccines available for free to everyone in the country over 5 years old, and signed a trillion dollar infrastructure law. But voters, fatigued by the uncertainties of the pandemic, have seemed reluctant to give him credit, and by fall, Biden’s approval rating dropped below 50%.

That puts him in a precarious position heading into 2022. With an evenly divided Senate and a narrow majority in the House, Democrats may lose control of Congress in the midterm elections in November. The checklist of what Biden wants to accomplish in his second year in office has to be ticked off with a limited amount of political capital, and a limited amount of time.

Infighting among Democrats has already delayed the next raft of Biden’s priorities, including expanding paid family leave and access to health care and child care. And campaign promises to pass voting rights legislation and police reform have seen little progress.

How the country fares in the COVID-19 pandemic in 2022 is likely to be the single biggest factor impacting what Biden can accomplish and how he will be judged, experts say. “The virus is going to determine what the second year looks like” for President Biden, says Timothy Naftali, a historian at New York University.

As the Omicron variant of the coronavirus spreads rapidly through the population, scientists and medical experts are watching to see how the new mutation behaves and spreads and what additional measures need to be taken.

The new variant has given more urgency to Biden’s efforts to convince parents to vaccinate their children above the age of four, make rapid tests more widely available, and urge those who are vaccinated to get booster shots. Biden promised the federal government will distribute for free half a billion home rapid tests by the end of January. He called up a surge of 1,000 troops to overstretched U.S. hospitals.

Going into the new year, just over 70% of Americans have gotten at least one shot of a COVID-19 vaccine and about 60% are fully vaccinated, according to data tracked by the Mayo Clinic. That’s below the goal medical experts have identified of fully vaccinating at least 80% of the general population, and 95% percent of the most vulnerable Americans, to significantly slow the march of the virus and limit its impacts. Research suggests that a booster shot could be most effective at slowing the spread of Omicron and reducing the chance of breakthrough infections leading to hospitalization or death.

If the pandemic improves and voters start to feel better about the economy, Biden may have more political leverage to pursue his agenda. In the meantime, Biden’s approval rating is hovering in the low 40s, and voters blame him for inflation, uncertainty in the supply chain and the long tail of the pandemic. “It’s always a bad thing for presidents when they’re less popular,” Naftali says. “It means there’s not much of a cost involved in saying ‘No’.”

Pass the Build Back Better bill

Biden is starting the new year still trying to get more than $1.75 trillion in social spending programs through Congress and on his desk, after months of negotiations within his party.

The Build Back Better bill passed the House in November but faced a major setback at the end of December when Democratic Senator Joe Manchin of West Virginia said he would vote no on the bill. With an evenly divided Senate and all 50 Republicans opposed, Manchin’s decision all but doomed the legislation that Biden hoped would be a cornerstone of his domestic policy.

Democrats could try to pass separate elements of the bill that Manchin supports in 2022, but even that path forward remains unclear.

Get credit for infrastructure spending

Aides close to Biden and Democratic strategists want the President to travel the country in 2022 and talk about what he’s already accomplished to jumpstart American infrastructure projects.

“The President, the cabinet, and congressional Democrats need to get out and sell what’s been accomplished,” says Democratic strategist Jim Margolis, who advised Barack Obama’s 2008 and 2012 presidential campaigns. “They can’t let up now and they need to make sure Americans understand the connection between what’s been accomplished and what that means in their lives.”

In the weeks since the $1 trillion infrastructure bill passed on Nov. 5, Biden has taken trips to New Hampshire, Michigan, Minnesota and Missouri to tout the spending and show Americans how the investments could impact their commutes, broadband access, water quality, and local economies.

Biden is expected to continue making stops like these in 2022 in key states ahead of the midterms, standing on bridges that will be repaired and talking about how investments in new industries to address climate change are also investments that create jobs.

Protect the right to vote

The Jan. 6 riot at the Capitol has brought new urgency to efforts to shore up the election system before the midterm elections on Nov. 8.

Fueled by former President Donald Trump’s false claims of voting fraud in the 2020 election, Republicans are pushing forward in multiple states to add new restrictions on voting access and to place political loyalists in positions where they could try to overturn legitimate election results. Trump has endorsed candidates for secretary of state and lieutenant governor in key states, raising concerns he’s laying the groundwork to reverse future Republican electoral losses.

Biden and some allies in Congress hope to erect guardrails on these efforts through legislation. One stalled bill, called the Freedom to Vote Act, would standardize some voting access measures across all states. On Nov. 3, Senate Republicans stood in the way of debate on a separate voting rights bill named after John Lewis, the deceased civil rights leader and congressman from Georgia. That bill seeks to shore up parts of the 1965 Voting Rights Act to require the Justice Department sign off on changes to voting laws in some states. Advocates for voting rights are pressuring Democrats to suspend the filibuster for both bills, which would allow the legislation to move forward with 51 votes instead of the current 60 vote threshold. Biden said at a CNN town hall event in Baltimore on Oct. 21 that he’d be open to the Senate ending the filibuster for voting rights legislation “and maybe more.”

Manchin has put forward a compromise version of a voting rights bill, called the For the People Act, that would impose national early voting and vote-by-mail standards, require new transparency in political fundraising and establish Election Day as a national holiday. But Manchin has said he doesn’t want to end the filibuster to pass voting legislation. Like with the Build Back Better bill, the White House and fellow Democrats have struggled to change Manchin’s mind. Biden urged Congress to move forward with voting rights bills that have been blocked from debate by Senate Republicans.

“I’ve never seen anything like the unrelenting assault on the right to vote. Never,” Biden said on Dec. 17, at South Carolina State University’s 2021 fall graduation ceremony. “We’re going to keep up the fight until we get it done.”

Negotiations in the Senate have stalled over efforts to bring more transparency to how police departments operate, improve training and limit some police practices that have been repeatedly abused. Efforts to bring the George Floyd Justice in Policing Act, a bill that passed the House in March, collapsed in the Senate in September.

The House version makes it easier to convict police officers for misconduct in federal prosecutions, gives Justice Department lawyers more authority to subpoena records when investigating patterns of abuse by police departments, and restricts the use of chokeholds and no-knock warrants. The bill would also create a national registry for police misconduct.

Advocates for police reform want Biden to make passing the legislation a higher priority in 2022. Biden has thanked the Fraternal Order of Police for “sincerely trying to reach an agreement on meaningful reforms” in Congress. He has also said police departments “need help to do better,” speaking at an Oct. 16 annual memorial service for fallen police officers at the U.S. Capitol. “I want to make sure you have the tools to be the partners and the protectors your communities need.”

Biden still hasn’t been able to fully staff his Administration. As of mid-December, 11 months into his administration, 171 of Biden’s picks for senior administration positions were still waiting to be considered by the Senate. Senators had confirmed 266 positions, according to data kept by Partnership for Public Service.

White House officials are frustrated and believe Senate Republicans are blocking consideration of Biden appointees to keep Biden’s rate of confirmations at the same slow pace seen during the first years of the Trump Administration. By comparison, close to 400 political appointments had been filled at this time in the Obama and George W. Bush Administrations.

Political appointees hold ambassadorial positions and run departments and agencies across the federal government. Not having those roles filled can hamper a President’s ability to implement a policy agenda. 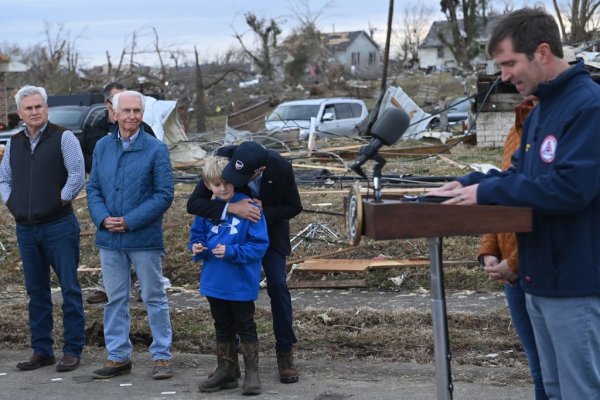 Biden Tries to Bring Comfort to Kentucky After Deadly Tornadoes
Next Up: Editor's Pick