U.S. Surpasses 50 Million COVID-19 Cases. It Has Been Worse

The number of reported cases of COVID-19 in the U.S. surpassed 50 million on Monday as the pandemic reached yet another inglorious milestone. While this is very unlikely to be the final time the odometer’s seventh wheel turns over—“50 million” is also known as 50,000,000—there remains some hope that the endless accumulation is at least slowing.

Let’s recall where we were a year ago. On Dec. 13, 2020, with the bloom in infections from Thanksgiving travel still in full effect as Americans packed for Christmas, the seven-day rolling average of new daily cases stood at 218,005. In the weeks that followed, a new million-case mark arrived every four to five days. Yesterday, the rolling average stood at 119,604, barely half of last year’s figure. As you can see, the rate of new infections, visualized by the color of the vertical bars below, is not nearly as angry as it was 12 months ago. (Tap “Weekly” to see the difference in relief.) 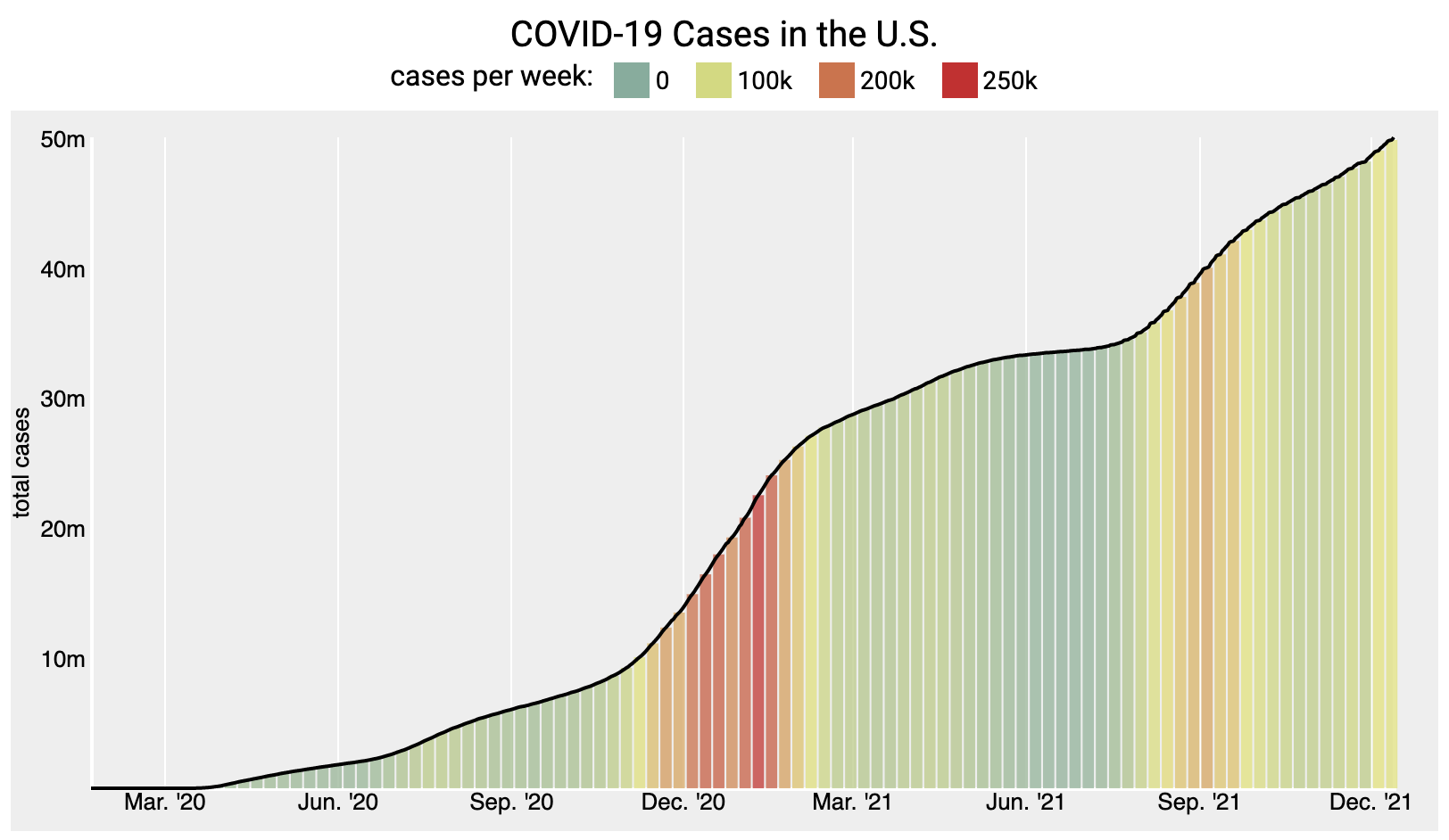 The holidays are certain to feed the fifth wave at least through January, but if the rate at which the virus is spreading can be contained to around half of what it was a year ago, there is some hope that the present surge can at least be tempered.

What’s more, with every passing day the standard measurement of cases per 100,000 people gets less precise as more and more people contract the virus a second time. We can’t avoid double-counting since there are no comprehensive data on how many cases are reinfections. Meanwhile, a study in Minnesota found widespread (if relatively low) cases of reinfection through early November, and early evidence suggests that the Omicron variant can better evade the natural immunity from a previous infection.

The emergence of Omicron did lead to a surge in new vaccinations, but that spike appears to be tapering, and the national rate of completed vaccinations currently sitting at 60.8%, still stubbornly below the lowest estimate for herd immunity. A full year into the national vaccination campaign, there is no sign that national immunity will reach this level, particularly as the first wave of vaccines flags and more and more recipients are due for recommended booster shots. Absent a surge in participation, and given early research suggesting Omicron could cause an explosion in new cases, 2022 could well be the year cases surpass 100 million.

Pfizer Shot Has 23% Efficacy Vs. Omicron: Study
Next Up: Editor's Pick