No, You Should Not Have or Participate in a Coronavirus Party. Here's What to Know About Herd Immunity

A crowd of people walking and exercising at Hudson River Park despite orders by the government to stay home and practice social distancing amid the COVID-19 outbreak on March 26, 2020 in New York City.
John Nacion/NurPhoto via Getty Images
By Jasmine Aguilera

In recent weeks, all around the world people have started to suggest that intentional exposure to COVID-19 could actually be beneficial for society at large. Discussions on social media about herd immunity have grown louder, and the Swedish government announced on April 22 that it is weeks away from achieving it in Stockholm. Hundreds of people have volunteered to become infected as part of a controversial approach to speed up development of a vaccine, known as a human-challenge trial.

The U.S. has successfully achieved herd immunity from diseases like chickenpox, mumps, polio and measles, but we’re a long way from getting there with COVID-19, experts tell TIME. In fact, trying to build immunity to the coronavirus through exposure rather than waiting for a vaccine to be developed could have deadly consequences.

Scientists do not yet know for certain whether the human body even develops immunity after an infection with SARS-CoV-2, the virus that causes the disease COVID-19. And, if the body does become immune, there’s no evidence that shows how long immunity to the virus might last after recovery. Based on previous research into other coronaviruses (such as those that cause MERS and SARS), experts do believe it is likely that someone infected with COVID-19 will have some level of immunity after recovering from the illness, but the details are still very much unknown. Which is why, they say, it’s a terrible idea to purposefully expose yourself to infection.

As part of the new TIME 100 Talks: Finding Hope series, Dr. Anthony Fauci, director of the National Institute of Allergy and Infectious Diseases and member of the White House Coronavirus Task Force, talked to TIME senior health correspondent Alice Park about herd immunity (among other things), and whether it was achievable with COVID-19.

“We really can’t depend on herd immunity until we get either enough people infected, or enough people vaccinated,” he said during the Thursday interview. That means either a vaccine is developed and the vast majority of people become immune to the virus, or 70-80% of people contract the virus through community spread and develop antibody protection, indirectly protecting the rest of the population that is not yet immune to the virus.

Both of these paths toward herd immunity can theoretically occur in the long-term future, experts say, but one is more deadly than the other.

“Eventually, we [will] achieve herd immunity, but we don’t want that to happen quickly,” says Gypsyamber D’Souza, a professor of epidemiology at the Johns Hopkins University Bloomberg School of Public Health. “There would be so many deaths.”

What is herd immunity?

Exposure to a disease-causing organism triggers the body to produce antibodies, disease-specific proteins that fight off the infection. On first exposure, it can take the body a while to develop the right antibody. However, in many cases, the human immune system retains knowledge of that infectious agent, and if it comes across it again, is able to rapidly deploy these antibodies to fight it off.

When a person develops this sort of antibody-based immunity to a given infectious agent, the likelihood that they will pass it on falls significantly says D’Souza. When 70-80% of a given population develops this antibody protection, herd immunity is achieved, indirectly providing protection to those who are not yet immune.

“It’s enough people being immune that over time the number of infections goes down rather than up,” says David Dowdy, associate professor of epidemiology also at Johns Hopkins University. “There are really only two ways to achieve this level of immunity. One is through development and mass distribution of a vaccine, and the other is through a massive increase in the number of people who get sick.”

In the case of COVID-19, a vaccine is still at least months, and more likely at least a year, away, according to experts on the White House Coronavirus Taskforce, including Fauci. Option two, then, might start to look like a viable option for some, but both D’Souza and Dowdy warn against it.

On April 5, former presidential candidate Andrew Yang shared a tweet saying “An army vet friend suggested that soldiers and vets be allowed to voluntarily get the virus in order to maintain readiness, provide an immune workforce and research antibodies. These guys and gals are hardcore.” On April 16, the Cincinnati Enquirer published an opinion piece by a physician at the University of Cincinnati with the headline “I want my kids to get coronavirus—and you should too,” arguing why Ohio should lead the effort in exposing child populations to the virus in waves. (The physician did not immediately respond to TIME’s request for comment).

Both D’Souza and Dowdy, though, say intentional exposure to the virus could increase deaths.

Dowdy says researchers think only about 1 to 2% of the U.S. population is currently immune to the virus. “It may be higher in places like New York City, but to get to 1 to 2% [immunity], we’ve already had over 40,000 deaths,” he says. “To get to 70% of the population being immune through natural protection, you’re talking hundreds of thousands of deaths, so not a good idea.”

Should people intentionally expose themselves to COVID-19?

In the days before there was a vaccine for chickenpox, parents used to hold “pox parties,” intentionally exposing their children to chickenpox in an attempt to build up the child’s immunity to the disease. That sort of worked—though the Centers for Disease Control and Prevention strongly recommends against hosting such parties, given the risk. And chickenpox is far less deadly than COVID-19 appears to be.

“There’s this impression that lots of people have had [COVID-19] and been just fine, and because we’re not testing some people have a sense that we’re closer to herd immunity then we really are,” says D’Souza.

“We’re talking here about a disease that’s probably 100 times more deadly, at least, than chickenpox. I also feel like people are confusing the idea of individual immunity and herd immunity,” Dowdy adds. “If people are thinking of intentionally exposing themselves, they shouldn’t be thinking in terms of herd immunity, they should be thinking in terms of the risk-benefit to themselves…that’s a big risk to take and not one that I think is a wise choice.”

There are other risk factors to consider with COVID-19. Infectious disease experts don’t yet know how long people can be protected by antibodies after recovering from the disease. There’s also the potential to spread the virus to those who might not be able to recover from it.

“The people you’re going to infect are going to be your friends and family,” Dowdy says. “You’re not just rolling the dice with your own health and life, you are doing the same with those who are closest to you.”

When will we get to herd immunity?

“We will not get to herd immunity in the close future, in the next year or two, but the preventive measures that we’re taking now”—like maintaining social distancing—“are buying us time to develop a vaccine that we can hopefully use to immunize ourselves and get herd immunity that way,” D’Souza says. 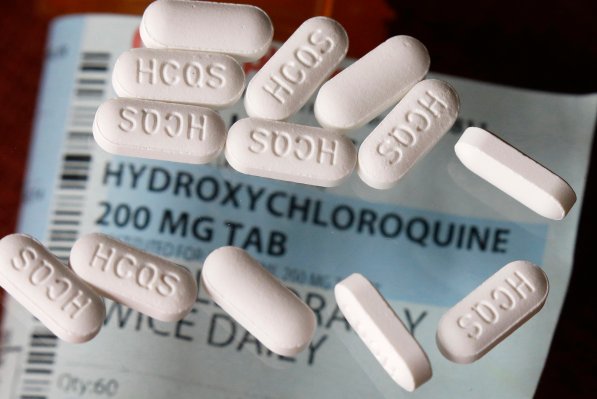 FDA Issues Warning About Hydroxychloroquine for COVID-19
Next Up: Editor's Pick