Susan Edwards is living out the dream of many a hopeless romantic at the start of Landscapers, a crime drama series out this week on HBO. She lives in France, with her husband and one true love, Christopher; she spends her days getting lost in French films and buying Hollywood memorabilia in antique stores.

But as the series shows over four tense and surreal episodes, Susan and Christopher are barely hanging on. In truth, they are on the run and have been in some form of hiding since they killed and buried Susan’s parents, William and Patricia Wycherley, in 1998. When Landscapers opens, Susan is spending money they don’t have on signed photos of Gary Cooper, while Christopher, unable to secure work due to the language barrier, has a full breakdown. He calls his stepmother back in the U.K. to ask for money and then makes a startling confession: more than 10 years ago, he and Susan buried her parents in their backyard. The stepmother calls the police, who exhume the bodies—and, naturally, have a lot of questions. As authorities seek the truth of what happened to Susan’s parents, the world the couple had built for themselves for more than a decade collapses.

Landscapers, which stars Olivia Colman and David Thewlis as the central couple, is both a mystery and love story based on chilling and sad real events. Here’s what to know about the true story that inspired the series.

A brief history of Susan and Christopher Edwards

Landscapers shows a couple living a life based on denial. The Guardian reports that the real-life Susan and Christopher Edwards tended to behave this way, too—after marriage, they lived in East London, where Susan stayed at home while Christopher worked as a credit control officer. They were not very social, and Susan spent most of her time indoors. “Their bank statements and credit card bills suggest she was absorbed in a fantasy universe. He had always been interested in military history and she became fixated by second world war leaders,” the newspaper wrote in 2014. “In the late ‘90s, they started buying stamps and autographs, and owning these bits of memorabilia became her passion.”

The fantasy Susan constructed may have been a way for her to deal with her life’s previous disappointments. The series depicts Susan’s relationship with her parents, William and Patricia Wycherley, as an unloving, abusive and secretive one cloaked in politesse. Patricia is shown to be an overbearing mother with a drinking problem, while William says little, but explodes in rage in the moments when he does speak. In the show, the already tenuous relationship devolves following a demand from Patricia to Susan that she sign over her inheritance (from a grandparent) to her parents. According to The Guardian, the relationship between daughter and parents was far from warm: “Her parents were the only people who had any entry into their world, and contact between the two couples was irregular and strained. Susan said in police interviews that her father had never approved of Christopher, and she thought he was jealous when they got married in 1983.”

Read more: The 16 Best True Crime Books of All Time

Colman and Thewlis, on the run
Stefania Rosini/HBO

A life of obsession with movies and memorabilia, a fractured relationship with family, a husband who seems to act out of the utmost loyalty—all strange for sure. But how did it lead to murder? The Edwards have one story, while a police investigation uncovers something different. In dramatizing the story, Landscapers fuses the two, blurring the lines between Susan and Christpher’s reality and the actual world to attempt to explain their mindset. In real life, according to the police investigation, the Edwards’ motivation to murder the Wyncherleys came down to money.

Forensic analysts determined that the Wyncherleys were fatally shot at their home some time over the May Day Bank Holiday weekend in 1998. The following business day, Susan emptied her parents’ bank account, according to The Guardian. Over the next decade, the Edwards did everything to keep up the appearance that the Wyncherleys were alive—they maintained their property, kept up with bills and Susan sent Christmas cards and letters on her parents’ behalf to give relatives “updates.” They also kept in touch with the Department of Work and Pensions so they could continue receiving the Wyncherleys’ pension payments, the BBC reports. In 2005, after a driver crashed a car into the property, the Edwardses sold it by forging signatures, continuing their lies. The delicate system worked—until it didn’t.

How did they get away with it for so long?

Until 2012, the ruse concocted by the Edwardses that the Wyncherleys were alive basically worked. Neighbors and friends who might have been suspicious that the couple was not seen anywhere brushed aside their doubt, noting they had been pretty reclusive to begin with. The beginning of the end came around William Wyncherley’s 100th birthday, when the Department for Work and Pensions wrote requesting an in-person meeting to go over his benefits. Panicked, Susan and Christopher took off to France, and lived on money they had stolen from her parents until they ran out.

In the miniseries, after Christopher calls his stepmother (which really happened) and the bodies are found, police look for the couple. They reappear in the U.K. following an email from Christopher to the police promising in “extremely polite” terms that the couple would give themselves up.

Landscapers shows that as film obsessives, the Edwardses—Susan especially—view life in movie terms. There are great heroes who step in to save the day and deep betrayals by villains; endings are either happy or sad. A miserable, self-described “broken” person, Susan depends on this way of thinking to get through each day. She and Christopher convince themselves that they are the heroes in the story of what happened to her parents.

In their carefully rehearsed account of what happened, Susan and Christopher admit to manslaughter. According to their version of the story, Susan was visiting her parents alone when, during a late-night fight, Patricia fatally shot William. Susan said that Patricia then began taunting her—among other things, she alleged that her father had sexually abused her when she was a child and that Patricia admitted she had known about it—and provoked her into shooting her mother. Christopher found out only the next week, according to Susan, when they returned to the house. The two watched Eurovision, they said, ate fish and chips and then she admitted it to him. That night, they said, they buried the two bodies in the garden.

Police quickly broke down their lies through forensic analysis and investigation. Per The Guardian, investigators found that the Wycherleys were each shot in a similar way, suggesting only one person had killed them both. Another hole: How could the couple have spent time in the house watching TV without Christopher noticing the smell of decomposing bodies? Doubts around their story grew deeper once Christopher shared that he had once been a part of a gun club and had experience with firearms.

Eventually, police determined that Christopher and Susan killed the Wycherleys in a premeditated double murder. The couple were found to have stolen nearly $400,000 from her parents after they were killed, and they spent the bulk of that money on war and Hollywood memorabilia—which was pretty much all they had left upon their arrest and imprisonment. In 2014, each was convicted of murder and sentenced to life in prison with a minimum of 25 years. They remain in prison today. 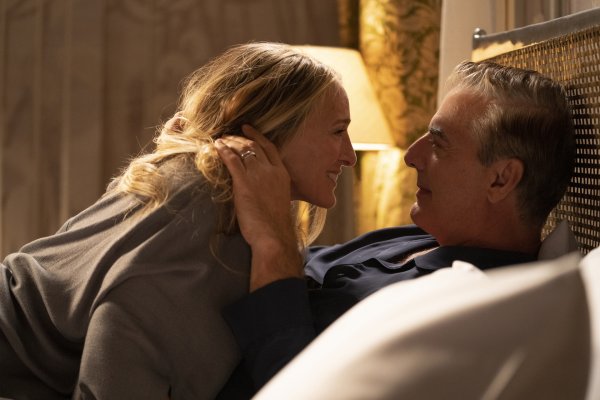 Breaking Down the Shocking First Episodes of Sex and the City Sequel And Just Like That
Next Up: Editor's Pick