Members of the Joint Action Committee carry placards during a protest in Karachi on December 4, 2021 against the killing of a Sri Lankan factory manager in Sialkot after he was beaten to death and set ablaze by a mob who accused him of blasphemy.
RIZWAN TABASSUM/AFP via Getty Images
Ideas
By Debasish Roy Chowdhury
Debasish Roy Chowdhury is the co-author of To Kill A Democracy: India’s Passage to Despotism

The gruesome lynching of a foreign national by religious extremists in Pakistan last week poses important lessons for India, whose Hindu nationalist rulers are pursuing the same policy of state-driven fundamentalism that now plagues their arch-enemy.

On Dec. 3, hundreds of people in the city of Sialkot, in Pakistan’s Punjab province, were party to the killing of a Sri Lankan factory manager. Priyantha Kumara, a Christian, had merely removed from factory machinery the stickers of an extreme right-wing party that featured Quranic verses, ahead of a visit by international clients. Seeing this as desecration, the mob dragged him out, beat him to death and set his body on fire.

Prime Minister Imran Khan called it “a day of shame for Pakistan” and promised justice. Clerics condemned the violence as “un-Islamic.” More than 100 people were arrested over the murder, but it all might be a bit late. The lynching is a reminder of “how far this nation has descended into the abyss”, lamented the country’s Dawn newspaper. “What have we become?” tweeted one anguished Pakistani. “We’ve created monsters,” read another pained tweet.

Read More: What Pakistan Gains from the Taliban Takeover of Afghanistan

The young men taking selfies in front of the burning corpse speak to the brutal zeal of Pakistan’s youth, radicalized by a process decades in the making. Since a blood-drenched independence, and the partition of the Indian sub-continent in 1947, the Pakistani elite has incrementally ceded ground to radical Islamist forces.

The hatred in Sialkot has deep roots

From the beginning, the promise of Pakistan’s founding leaders to grant equal citizenship to all sounded implausible, given that the country broke away from India on the basis of religion. As the newly minted nation went about forging a federation of ethnic groups that had little in common apart from their faith, top-down secularism ran up against bottom-up Islamism. Unlike Hindu-majority India, which adopted a secular constitution within two years of its independence from the British, Pakistan continued to wrestle with its identity and struggled to frame its constitution for years. It finally declared itself an Islamic Republic in 1956.

The influence of religious parties and the clergy subsequently grew, helped by the Pakistani military’s use of India as the bogeyman to justify the undermining of democratic institutions and its own immense power. Framing the rivalry in religious terms—with Muslim Pakistan as the counter to Hindu India—it became imperative for the generals to befriend the mullahs, who helped keep secular parties in check.

Pakistan has endured about 33 years under four military dictators, all of whom co-opted religious groups to legitimize their own rule, playing along with their demands for Islamization through new laws and Sharia courts. Even civilian governments used these groups and their mass appeal for electoral gain, entrenching Islamic extremism.

Supporters of the Tehreek-e-Labbaik Pakistan (TLP) party shout slogans during a sit-in protest in Lahore on October 20, 2021
ARIF ALI/AFP via Getty Images

External factors also played a part, especially the Soviet invasion of Afghanistan and Pakistan’s role as a frontline state in the U.S.-backed Afghan jihad to expel the Soviets. Foreign money poured in to expand the network of madrasas churning out radicalized young men ready for war. By the time the Soviet forces withdrew in 1989, Pakistan was crawling with battle-hardened jihadis and saddled with an infrastructure of Islamist fundamentalism that had taken on a life of its own. Rather than dismantling this machinery of fanaticism, the military decided to use it in its proxy war against India in the long-running contest over Kashmir.

Frenzied mobs, like the one that gathered at Sialkot, are the result of this volatile mix of cynical politics and power plays. They are made up of angry young men, mostly school dropouts, or indoctrinated at madrasas, or illiterate (25 million children are out of school in Pakistan). With low prospects of proper work, and easy to mobilize as foot soldiers of radical Islam, they are the products of Pakistan’s chronically underdeveloped economy and historically low state spending on education—itself a consequence of an oversized military budget that leaves few resources for other needs.

In a viral photo [Caution: graphic scene] of one such young man taking a selfie as Kumara’s body burns, the words “Apna time ayega“ (my time will come) can be seen on the back of his mobile phone. It’s the catchphrase of a rap song from a Bollywood film about a young Muslim man who hip-hops his way to fame from his wretched shack in a Mumbai slum. Wildly popular for its message of hope for the underdog, the song and the phrase have found wide adoption in memes, advertisements, and politics. Indian prime minister Narendra Modi’s supporters even appropriated it for his re-election campaign in 2019.

The time has certainly come for India’s Hindu extremists. On the day of the Sialkot killing, in New Delhi’s glitzy tech and finance hub of Gurugram, they gathered to protest against Muslims praying.

As Gurugram doesn’t have enough mosques, the local administration had earmarked several open spaces where Muslims could congregate and offer their Friday prayers. Lately, Hindu activists—emboldened by state patronage afforded by Modi’s Bharatiya Janata Party (BJP)—have made it a point to descend on these sites to prevent Muslims from doing so. There used to be about 100 designated prayer sites, but they shrank to 20 in three years as a result of the sustained campaign by Hindu groups. Giving in to the demands of the mob, local officials have now taken the rest of the sites off the list, asking Muslims to pray elsewhere.

This is one of an increasing number of failures by the state to protect minorities. Munawar Iqbal Faruqui, a Muslim stand-up comedian, was recently told by police in Bangalore that he would have to cancel his shows as extremists were threatening to burn down the venues, and police could do nothing about it.

Not only are vigilantes allowed to operate with impunity, they have been granted legitimacy by a raft of new laws against religious conversions, the slaughter of cows (considered sacred by Hindus) and interfaith marriages. They find support at every level of administration, from the police to the higher bureaucracy, as Modi attempts to remake India’s secular republic into a Hindu state. India has let the genie out of the bottle that Pakistan is struggling to put back in.

A member of a radical Hindu group confronts a Muslim worshipper on December 3, 2021 in Gurugram, India.
Vipin Kumar/Hindustan Times via Getty Images

Lynchings and other attacks on Muslims and their livelihoods have become commonplace. Christians, too, are being targeted. On Monday, a right-wing group vandalized a Catholic missionary school in the central province of Madhya Pradesh. But Muslims remain the preferred bugbear of Hindu extremists. Constituting 14 to 15% of the population, compared to the 2.5% who are Christian, they are a far more dangerous “other” against whom Hindus must unite.

It’s no coincidence that every time an election is round the corner, Modi and his supporters can’t stop talking about Pakistan. The brutalization of Hindus in Pakistan is used to great effect by the BJP to charge its base for revenge against Indian Muslims. Conflating national, religious and political rivalries into one existentialist threat, the words “Pakistani,” “jihadi,” “Taliban,” and “Muslim” are used interchangeably.

Hindu nationalists bristle at any comparison between their violent foot soldiers and Islamic terrorists. But while the history and nature of extremism is different in the two nuclear-armed countries—which have fought four wars—their mobs are not. Like his Pakistani counterpart, the average Hindu vigilante is a byproduct of low state spending on education and unequal opportunities. An estimated 40% of India’s youths are neither in employment, education or training. They are basically doing nothing, which is why their Fridays in Gurugram are spent outside the district’s shiny offices chasing Muslims, rather than inside.

The paranoia, political opportunism and despair that breed adversaries on both sides are also the same, spurring them into action against the “other” in a cycle of hate. South Asia’s time will never come if it can’t break out of it. 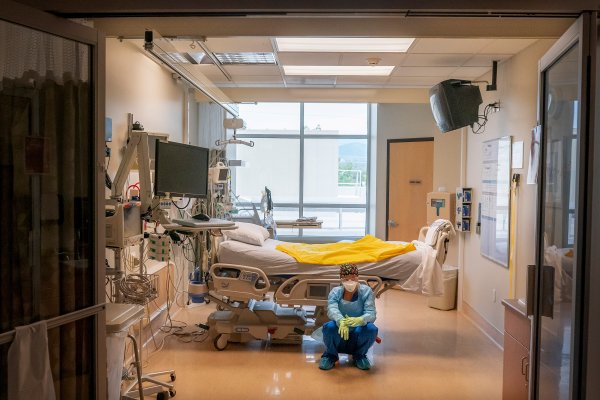 What Actually Worries U.S. Doctors About Omicron
Next Up: Editor's Pick