What Pakistan Stands to Gain From the Taliban Takeover of Afghanistan

Ideas
By Anatol Lieven
Lieven is a senior fellow of the Quincy Institute for Responsible Statecraft and author of Pakistan: A Hard Country. His website is www.anatollieven.com. His latest book, Climate Change and the Nation State, is appearing in an updated paperback edition in September.

We need to recognize that the single most important factor in Taliban victory was their own commitment, courage and sheer grit. Nevertheless without Pakistan’s shelter and support they might not be marching through the streets of Kabul right now. How grateful they will be remains to be seen. But Pakistan wasn’t doing it for them. Pakistan’s strategy of helping the Taliban stemmed from long fears concerning Afghanistan, some of which have existed since Pakistan became a state in 1947.

These fears were of Afghan alliance with India and Afghan support for rebellion inside Pakistan, and have therefore been considerably reduced by the Taliban victory. India is bitterly hostile to the Taliban and very unlikely to be able to ally with them; and if the Taliban support Islamist rebellion against Pakistan, they will cut off Afghanistan’s trade routes to the sea; quite apart from the fact that the Pakistan Army has demonstrated in recent years (after some delay) that it can successfully crush any rebellion. The strong Pakistani alliance with a China that is vastly richer than it was 20 years ago also gives Pakistan the hope that Chinese investment in Afghanistan may help to keep the Taliban government aligned with Pakistani interests. Pakistan can therefore afford to be quite confident about the positive consequences of the Taliban’s victory.

But there is a complicated history that is worth exploring. The older story of Afghan-Pakistani hostility over the past 74 years was a legacy of the British Empire. In the 1890s, the British drew a frontier between Afghanistan and their Indian Empire which came to be known as the “Durand Line,” after the British colonel who surveyed it. Drawn purely for British strategic reasons, this border cuts through the middle of the Pashtun ethnicity, and even through the middle of several Pashtun tribes like the Afridis.

Afghanistan, a state founded by Pashtuns in the mid-18th century, has never accepted this border. When the British Raj ended in 1947, the Afghan government initially refused to recognize Pakistani independence unless Pakistan tore up the Durand Line and handed its Pashtun territories to Afghanistan. This not surprisingly Pakistan refused to do.

As a result, a succession of Afghan governments continued to refuse to recognize the Durand Line as a legal frontier, aligned Afghanistan with India against Pakistan, and periodically attempted to stir up Pashtun ethnic separatism in Pakistan. In response, for almost 70 years Pakistan tried either to influence or to weaken Afghanistan through a combination of economic pressure and inducements with support for rebellions within Afghanistan.

With the Taliban victory, Pakistani fear of Afghan alignment with India has vanished for the moment, as India has always been bitterly opposed to the Taliban, due to their support for the Islamist revolt in Kashmir. Since the 1980s, however, another combination of Pakistani fears emerged concerning Afghanistan: that of Afghan refugees causing destabilization among Pakistan’s Pashtuns.

During the Afghan war of the 1980s, some three million mostly Pashtun refugees fled into Pakistan. These refugee camps became fertile recruitment grounds first for the mujahedin, and then for the Taliban. The refugees to a considerable extent merged with the Pashtuns of Pakistan, and the Afghan jihad after 1979 and 2001 received passionate support from many Pakistani Pashtuns, especially in the tribes that straddled the border with Afghanistan.

In 2003, intense U.S. pressure led the Pakistani government of General Pervez Musharraf to attempt a selective crackdown on anti-American Islamist fighters who had fled Afghanistan for the Tribal Areas of Pakistan. The result was an escalating series of Pashtun Islamist revolts in Pakistan that in 2007 came together to found the Tehreek-e-Taliban Pakistan, or TTP. The resulting civil war in Pakistan cost some 60,000 dead including 8,000 soldiers and former prime minister Benazir Bhutto.

The other Pakistani reason for helping the Afghan Taliban has therefore been to make sure that they do not support Pashtun Islamist rebellion within Pakistan. To date they have not done so, and ensuring that they do not do so in future will be central to Pakistan’s strategy.

Pakistan confidence in this has been increased by the appearance in recent years of a common enemy of Pakistan, the Afghan Taliban and the other main regional states: ISIS, which is called in Afghanistan Daesh. ISIS are bitter rivals of the Taliban for rule in Afghanistan, and have recruited a considerable number of Taliban dissidents. On the other hand, ISIS in Afghanistan is also largely made up of members of the Pakistani Taliban who fled into Afghanistan as a result of successful Pakistani military offensives against them after 2014. This gives Pakistan and the Afghan Taliban a common enemy. But there is a risk that if the Taliban experience internal dissent over how to govern, the disappointed elements are likely to gravitate to ISIS and threaten Taliban unity and rule.

The Afghan Taliban have publicly renounced international terrorism and jihadism, and have given specific assurances to Moscow and Beijing that they will not support Chechen and other Islamist rebels against Russia, Uighur rebels against China, and the Islamic Movement of Uzbekistan (IMU) and other Central Asian jihadi forces. They have also promised Iran not to provide bases for anti-Iranian Sunni rebels supported by Saudi Arabia. The Taliban can probably be trusted on this, since they can hardly afford to face the hostility of their entire region, and to risk their external trade blockaded.

In my own conversations with lower-level Taliban figures over the years, they have also assured me that the Taliban have learned the lesson of the disaster that befell their regime as a result of 9/11. ISIS on the other hand remains dedicated to international jihad and incorporates many international jihadis in its ranks.

Pakistan hopes therefore that a regional coalition of itself, China, Russia and Iran (if the Taliban keep their promises to Tehran to respect Shia rights in Afghanistan) will support the Taliban against ISIS, ensure that the Taliban themselves do not back international extremism, including an Islamist revolt in Pakistan, and refrain from backing Tajik, Uzbek and other ethnic forces against the Taliban state.

Pakistan may be helped in its Afghan goals by the enormous economic power of China. Beijing’s chief concern in Afghanistan is that it should not be a base for Uighur rebels against China. However, China has also agreed in principle to make billions of dollars of investments in Afghanistan, including the development of a giant copper mine at Aynak, and of oil and gas reserves in the north of the country.

The Afghan civil war has meant that to date China has not actually started any of this. If Beijing is confident enough in the Taliban state and Afghan peace to make this investment, it will not only help secure stable Taliban government in Afghanistan; the new transport connections needed to export the copper will bind Afghanistan into Pakistan’s transport network and the China-Pakistan Economic Corridor (CPEC) that runs the length of Pakistan from Chinese Sinkiang to the Pakistani ports of Karachi and Gwadar on the Arabian Sea.

These then are Pakistan’s hopes concerning Afghanistan; but as Pakistanis would be the first to admit, Afghanistan has a long tradition of disappointing outside hopes, and frustrating well laid plans. 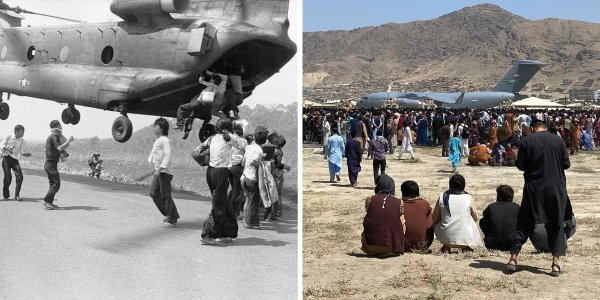 The U.S. Offered My Family a Home After the Vietnam War. It Must Do the Same for Those Fleeing Afghanistan
Next Up: Editor's Pick