Today, the Middle Ages are a sort of paradox; the myth of the “Dark Ages,” which survives quite ably in popular culture, allows space for it to be whatever the popular imagination wants. When people want to kick a current problem back into the past—whether terrorism, bungled responses to COVID-19, or even the process for getting a driver’s license—they call it “medieval.” Yet when white supremacists want to claim an origin story for whiteness they too, look to the Middle Ages, seizing on glorious, golden artifacts, big castles and cathedrals to offer a simplification of racially pure patriarchal militarism. The period is good and bad, transparent and opaque, only hazily understood—but ultimately the opposite of what we want our modern world to be.

And if you can’t see into the darkness, the imagination can run wild.

Beginnings and endings are arbitrary; they frame the story that the narrator wants to tell. If we as a culture decide that the Middle Ages existed and had a beginning and end, we don’t need to start with decline or death. But because the “Dark Ages” has stood as a shorthand for the European Middle Ages for centuries, we’ll need to flip the framing from the start. So the “Bright Ages,” in contrast, begin and end bracketed by the hope of basking in light.

This doesn’t, of course, erase the violence of the past to replace it with naive nostalgia. Instead, it shows us that paths taken were not foreordained. Shifting our perspective brings people, traditionally marginalized in other tellings, into focus.

Read more: The Middle Ages Have Been Misused by the Far Right. Here’s Why It’s So Important to Get Medieval History Right

An illustration from Marco Polo and Rustichello's Livre des merveilles du monde (Book of the Wonders of the World) showing spices being loaded onto cargo ships for transportation.
DeAgostini—Getty Images

Things that begin need to end, otherwise there’s no medium aevum, no “middle age,” no “medieval.” So we could instead draw the medieval to a close just a bit later in the fourteenth century as plague ravaged Asia, Europe, North Africa, and the Middle East. Or we might say the medieval ends in the fifteenth century as the Ottoman Turks overwhelm the entire Eastern Mediterranean, creating a new empire that extends from the Indian Ocean to, from time to time, the walls of Vienna—an empire that would fight with the Christian Venetians and ally itself with the Christian French. Some have even argued that the medieval world comes to a close only with the French Revolution and the fall of the monarchy at the end of the eighteenth century.

Ultimately, none of these moments are satisfactory. The plague arrived because of connections between Asia and Europe that had been established across centuries. The Ottoman Turks emerged out of generations-long interactions between steppe and city, a people fully steeped in an intellectual culture that shuttled competing interpretations of both scripture and Aristotle from Persia to Iberia, a people carrying the same luxury goods and bacteria across regions. The French Revolution was possible only because medieval people experimented with democratic representation, oftentimes at a small scale, and had a long history of anti-authoritarian revolt. The peoples, the plague, the art, the governments, and the wars all belong to the medieval world.

What is clear is that people in fourteenth- and fifteenth-century Italy, frustrated with the political chaos and warfare of their ugly era, decided to draw nostalgic links to the worlds of ancient Rome and Greece, using the distant past to sever their connection to the previous thousand years of history.

Later, throughout the eighteenth and nineteenth centuries, imperialist European powers and their intellectuals sought a history for their new world order to justify and explain why whiteness—a modern idea, albeit with medieval roots—justified their domination of the world. They found the proto-nations of the Middle Ages useful as a past to point to for their modern origins, pointing to both medieval connections to Greece and Rome and the independence and distinct traditions of medieval polities. These modern thinkers used the fiction of Europe and the invented concept of “Western Civilization” as a thread to tie the modern world together. They looked outside themselves and saw barbarism. They looked into both the medieval and classical European past and imagined they found white faces, like theirs, looking back at them. They were wrong about all of this.

Read more: The Idea of the ‘Dark Ages’ Is a Myth. Here’s Why Medieval Scientific Progress Still Matters

We are both historians of medieval Europe, having spent years with primary sources producing our own research. But we’ve also, been blessed by the work of hundreds of scholars who have shaken loose the old stories of the Dark Ages to reveal a much more complicated, much more interesting picture of the period. Medievalists have built and then torn down the construct of feudalism as a system and replaced it with ideas of complex networks of affinity and hierarchy that morphed and flowed with big ideas and hyperlocal tradition; our colleagues and mentors have helped place Europe into broader global systems of trade, religion, movement of peoples, and disease. We’ve learned about medieval ideas of tolerance, but also the formation of ideas about racial difference and hierarchies. Medievalists are complicit in the creation of the idea of the Dark Ages and how the medieval world is used in the service of hateful ideologies even today, but are also acknowledging mistakes and trying to tear that scaffolding down.

The Bright Ages contain the beauty and light of stained glass in the high ceilings of cathedrals as well as the blood and sweat of the people who built them; the golden relics of the Church and the acts of charity and devotion by people of deep faith, but also the wars fought over ideas of the sacred, the scorched flesh of the heretics burned in the name of intolerance and fear. They reveal the permeable nature of the interwoven cultures of Europe but were not constrained to Europe. They were aware—as the medievals themselves were—of a much larger, round globe.

In these Bright Ages, scientists looked to the sky and measured the stars, built the university, laid the foundations for the European contribution to the global scientific revolution, and did so without surrendering their beliefs in a higher power. There were also, just as now, people who limited debate, prosecuted thought crimes, repressed freedom, and killed people who were different from them. The Bright Ages stand out as a pivotal place and time in history because they contain all the multitudes of possibility inherent in humanity. But until now those lights have often been hidden under a bushel of bad history and a persistent popular assumption about the Dark Ages, too often created and reinforced by medieval historians ourselves. We can at times revel in the weirdness of the medieval and forget to teach the connections. At the same time, we forget how much things have changed over time.

Adapted from The Bright Ages: A New History of Medieval Europe by Matthew Gabriele and David Perry. Copyright © 2021. Available from Harper Collins. 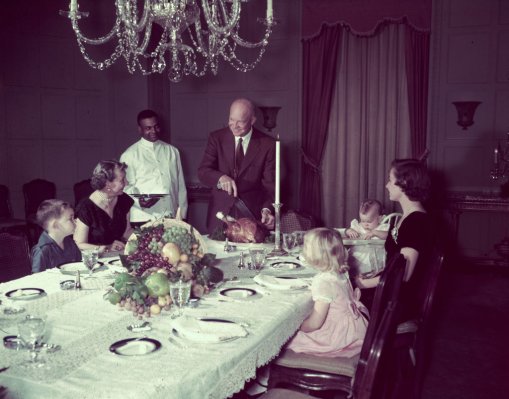 The History of Presidential Thanksgiving Proclamations
Next Up: Editor's Pick