America's 1% Got Way Richer During the Pandemic. We Need a Onetime Wealth Tax to Help Rebuild the Country

People demonstrate during the “March on Billionaires” to raise attention to the inequity in income among the wealthy and the working class in New York City on July 17, 2020.
John Laparski—Sipa USA
Ideas
By Daniel Markovits
Markovits is Guido Calabresi professor of law at Yale Law School and the author of The Meritocracy Trap: How America’s Foundational Myth Feeds Inequality, Dismantles the Middle Class, and Devours the Elite, published by Penguin Press

The coronavirus has been nothing less than a calamity. But more than a year into the pandemic, it is distressingly clear that although the virus affects everyone, we are not all in this together. Instead, the disease highlights and worsens existing fault lines in American society, especially economic inequality.

The Biden Administration recognizes the problem. The American Rescue Plan (ARP) Act, signed into law in March, is the most economically progressive legislation in a generation. But for all that it does to fight poverty, the ARP will do distressingly little to reduce inequality.

The statute works almost entirely through public spending. But the economic inequality that separates the rich from the rest has become so great that spending alone can’t repair it or even reverse inequality’s increase over the course of the pandemic. The rich have too much money. We simply can’t spend our way back to equality.

Curing economic inequality requires redistribution, and redistribution means taxes. National solidarity in the face of a universal threat like the pandemic requires the rich to contribute to the relief effort. Income taxes can help, but the best way to reduce inequality and honor shared citizenship is to tax wealth.

The first wave of the pandemic hit the rich, who were exposed to the virus through travel and public appearances. But privilege quickly reasserted itself. COVID-19 infections soon became concentrated among low-paid workers, who cannot afford to leave their jobs and whose working conditions make social distancing difficult. In one study, the least economically privileged fifth of counties experienced COVID-19 death rates 67% higher than the most privileged fifth. Another study reports that Black Americans have died from COVID-19 at more than twice the rates of their white counterparts. Unemployment, and the lost income and dignity that follow, have also hit the worst off hardest.

Perhaps no facet of inequality has grown more dramatically than wealth. The 15 richest Americans have become over $400 billion richer since the markets bottomed out in March 2020. Meanwhile, a yearlong bull market—triggered by the CARES Act’s passage at the market trough and supported since then by a series of government rescues—has added roughly $4.8 trillion of wealth to the richest 1% of American households. More comprehensive measures, which include real estate and privately held companies, report that the richest 1% of Americans gained over $7 trillion of wealth from the end of March to the end of December 2020.

By comparison, the money in the ARP—$1.9 trillion over 10 years—sounds relatively modest, and truly is. The ARP’s spending is front-loaded, so that $1.2 trillion will be spent in 2021. On average, each percentile in the bottom 80% of the income distribution will get a little over 1% of this sum, or about $12 billion. That’s less than 1/500th of the increased wealth that the richest 1% have accumulated over the pandemic year—a drop in the ocean.

The only truly effective way to tackle wealth inequality this extreme is to meet it head-on, by taxing wealth itself. A levy on the super-rich figured prominently in the presidential campaigns of Senators Bernie Sanders and Elizabeth Warren, who have now teamed up on a joint proposal to impose an annual 2% tax on household wealth above $50 million, rising to 3% above $1 billion. I propose a simpler and broader onetime wealth tax with lower exemptions and higher rates, tied directly to a national response to pandemic emergency: a onetime tax starting at 5% on the richest 5% of households, that is, on wealth in excess of $2.5 million.

Americans agree that the extraordinary catastrophe caused by COVID-19 calls for an extraordinary response—one that draws not on the income used to fund everyday government expenditures, but rather on the stock of advantage that the most privileged have accumulated across decades of good times. When asked in a poll about the onetime tax, Democrats favored the plan by a ratio of 6:1, independents by nearly 3:1, and even Republicans favored the tax by 2:1.

All the proposed wealth taxes have strengths and weaknesses. Ongoing taxes can have higher exemptions and lower rates and might raise more revenue over the long run. On the other hand, the complexity of the extreme fortunes (offshore trusts, private investments, art, etc.) on which ongoing taxes focus make them difficult to administer; the super-rich have many opportunities for tax avoidance; and the prospect of regular wealth-tax bills might discourage capital accumulation and reduce economic growth. A onetime tax can reach a broader tax base with a simpler structure and fewer unwanted side effects.

The richest 5% of American households own two-thirds of the country’s total wealth, much of it in forms (publicly traded securities, real estate property) for which data on valuations already exist. Using a past date—for example, the date on which the wealth-tax bill was introduced in Congress—to fix valuations makes tax avoidance much less of a problem. And a onetime tax will create no economic distortions on savings and investment going forward. A onetime tax can also raise more immediate revenue and reduce inequality more quickly than an ongoing tax, even as it leaves unresolved future battles over economic justice.

Oliver Wendell Holmes once said, “I like to pay taxes. With them, I buy civilization.” He should be taken literally. World history teaches that oligarchies are almost impossible to unwind except by war or violent revolution. Extreme wealth inequality confronts the U.S. with a civilizational threat. Wealth taxes answer the threat.

Markovits is the Guido Calabresi Professor of Law at Yale Law School and the author, most recently, of The Meritocracy Trap 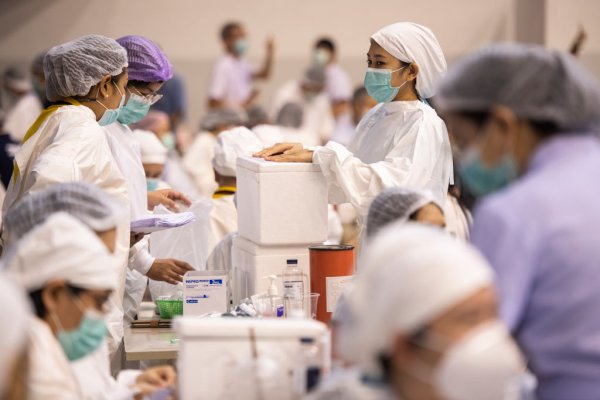 Asia Set to Rebound Faster Than U.S.
Next Up: Editor's Pick