There is a reason certain reality TV show feuds remain etched in our minds, even as pop culture has moved on. From Lauren Conrad and Kristin Cavallari in Laguna Beach to Lauren Conrad (again) and Heidi Montag in The Hills, the formula was very simple and yet strangely nuanced: Two young, beautiful and classed white women face off against each other because of a guy. The loyalties between the two female friends are tested as the game of he-said, she-said and near confrontational run-ins at spots around town keep us as the audience at the edge of our seat.

Or, we can take one of the best movies about social dominance within the last 20 years as proof that we as a society love mess: Mean Girls. It’s a cinematic landmark that Christine Quinn, the proposed villain of Selling Sunset, references throughout the fourth and latest season, which premieres on Netflix on Nov. 24, because she yearns for a way to control the other women of The Oppenheim Group as Rachel McAdams’ Regina George did in her high school. The problem is Christine has neither the gravitas nor strength to be a believable villain or a victim. And this is where the season falls flat. There is no one to root for, no one to hate, but everyone is undoubtedly exhausting.

We pick up the season where a nine-months-pregnant Christine is a notable outcast from the other real estate ladies—Mary, Heather and Chrishell—even as a new woman, Vanessa Villela, a former Mexican telenovela actor, joins the fold. While Christine is sauntering around L.A. County looking for a new home for a growing family—“10,000 square feet at least,” as she says—Mary, Heather, and Chrishell feel peeved because they only learned of Christine’s pregnancy through social media. But that’s not the biggest issue, by a long shot.

You see, Jason Oppenheim, founder of The Oppenheim Group, is not done adding to the team, and he enlists a woman named Emma to take Christine’s place in her absence while she tends to her baby. But the problem, according to Christine, is that her ex from five years ago cheated on her with Emma, and Mary, who is Christine’s oldest friend from the company, took Emma’s side in the fallout. Emma and Mary present different stories, claiming that Christine is a liar and that Emma’s relationship did not overlap with this ex. If you’re feeling tired reading the previous sentences, then imagine how tired I am rehashing this played-out nonsense. But the show must go on. In fact, for several episodes, that is the only drama that each episode hinges on, and it isn’t until the 10th and final one that we see an actual confrontation—if we can even call it that.

But one must ask: Out of all the seasons to bring up this ex from five years ago, why now? Christine is married with a newborn. Emma is presumably single. Who cares about this ex? The season is a long, overwrought play of women pointing the finger at each other without any real weight as to why this topic needs to be mulled over. Because reader, it doesn’t. It’d be one thing if Emma were still dating this man or Christine never got over him. But there’s none of that. All of these women have clearly moved on with their lives with new men, houses, and business ventures. There are no real stakes. The show seems to be selling drama alongside houses but unfortunately, the former has no substance, a two-dimensional image that breaks the fantasy of escapism. We all know cameras and production crews manipulate storylines but at least with the right editing and positioning, we can believe a good performance.

And that’s where Christine falls apart as the producers’ central narrative device to propel this season forward. If you are going to be a villain, you have to be committed. Kristin Cavallari. Nene Leakes. Tiffany “New York” Pollard. We may not have liked them at certain points of their reality TV show careers but they were memorable because they committed to an archetype. Even when they were wrong, they stood in that wrongness, no matter what. Christine flounders: one minute, she facetiously aspires to dictate to her colleagues what they should wear on certain days (a nod to Mean Girls); the next, she runs away from even the slightest bit of confrontation, sniffling with not a single tear to show for it. She’s too wishy-washy to be a villain and too polished to be a victim. What we are left with is a replication of high school politics without an ounce of grit, or, dare I say, true meanness with a purpose.

What made season three of Selling Sunset so memorable was that alongside the drama, there were other subplots that kept viewers on their toes: Mary and Romain’s relationship, Chrishell’s divorce, Heather’s desire to get married. This season has none of that and in turn, everyone is cheapened. It would’ve been nice to see how Christine is managing new motherhood after experiencing a traumatic birth, how Romain is forging his independence from his older, much more established wife or how even Davina is learning more about dynamics and boundaries since her mouth got her in trouble last time.

But no. All we get is a bunch of finger-pointing with no one really being able to see it through with words, which makes one ask: are they afraid of each other? And if they were, wouldn’t it be enlightening, or at the very least entertaining, to see where that fear might lead? 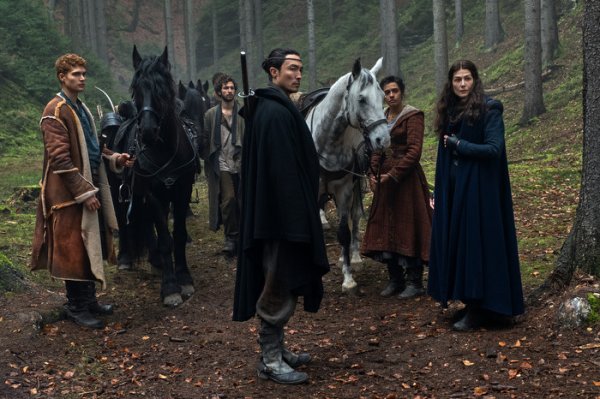 How Amazon's The Wheel of Time Stacks Up Against Its Source Material
Next Up: Editor's Pick