The Japanese anime series Cowboy Bebop, which premiered in 1998, is widely regarded as director Shinichirō Watanabe’s magnum opus. Set in 2071, in a post-apocalyptic world where Earth has become largely uninhabitable, the story follows a ragtag group of bounty hunters, known as cowboys, aboard the spaceship “Bebop.” As they traverse planets and moons in search of wanted fugitives, each cowboy contends with shadows from the past they can’t outrun.

More than twenty years since its debut, Cowboy Bebop continues to be lauded as one of anime’s best in large part because of the genre-melding episodes, the kaleidoscopic soundtrack from composer Yoko Kanno, the cinematography and the voice acting. But while the series’ artistic and technical elements deserve plenty of praise, it’s the experience of watching a group of lonely outcasts build trust and friendship with each other—after suffering from betrayal and loss—that keeps many viewers coming back. On Nov. 19, fans will have the chance to watch new renditions of the bounty hunters form bonds with each other all over again with Netflix’s live-action adaptation of the anime. The new series, which was co-produced with Tomorrow Studios, stars John Cho as suave ex-syndicate member Spike Spiegel, Mustafa Shakir as dependable former cop Jet Black and Daniella Pineda as spunky con-artist Faye Valentine. It credits Watanabe as a consultant and welcomes back Kanno to helm the score—her return is arguably the adaptation’s strongest selling point to existing fans.

Here’s everything to know about the original Cowboy Bebop before you watch the Netflix adaptation.

Watanabe, who was working at the animation studio Sunrise, made his solo directorial debut with Cowboy Bebop in 1998. The series was originally envisioned as a project that would sell toys, through a sponsorship from Japanese company Bandai. In an interview with Otaquest from 2017, Watanabe described Bandai’s toy division as having shown interest in something with spaceships as its core. “They thought both the series and affiliated merchandise would sell well,” the director said. “That’s why the offering of my ‘Bebop’ project was taken.”

But Bandai pulled the sponsorship when the initial episodes were produced. “They didn’t think such a dark and subdued portrayal of spacecrafts would do any favors to their toy sales,” Watanabe said. While Cowboy Bebop has its comedic moments, the show abounds with violence and interrogates concepts like existentialism and fatalism—not exactly the most marketable material for toy makers. After a separate subsidiary of Bandai stepped in, the project was allowed to continue without a connection to toys.

Cowboy Bebop‘s relatively dark tone was met with skepticism elsewhere. When Cowboy Bebop had its original run on TV Tokyo beginning in April 1998, only 12 of the 26 episodes, plus a special, were aired due to its mature subjects. “Before the broadcast even began—during the production of the first few episodes, there were a lot of internal stakeholders saying things like ‘This show is too adult,’” Watanabe told Otaquest. “Viewers who want the other 13 episodes will have to purchase them on laserdisc,” a reviewer wrote at the time. The full series eventually broadcast on the network Wowow a few months later in 1998.

How Cowboy Bebop made anime history in the U.S.

An English dubbed version of Cowboy Bebop released in the U.S. three years after premiering in Japan. Cartoon Network announced in 2001 that Cowboy Bebop would be in the lineup for the launch of Adult Swim, making the series the first anime broadcast on the adult-targeted programming block. Many aspects of the show made it seem appealing to U.S. audiences, Jason DeMarco, then-senior vice president at Adult Swim, told the animation publication The Dot and Line in 2018.

“Cowboy Bebop was heavily influenced by Western design, music, and classic noir storytelling,” DeMarco said. “Those elements, plus the structure of the show — stand-alone episodes followed by ‘story arc’ episodes, much like The X-Files, or other U.S. shows on the air at that time, made the show seem like something that could work for a U.S. audience.”

Cowboy Bebop is very much a Japanese show, filled with nods to Japanese culture, from Jet practicing the art of bonsai to buying bird-shaped sponge treats inspired by the Japanese treat Hiyoko cakes. Watanabe has also said that Spike Spiegel is modeled after Japanese actor Yūsaku Matsuda. But influences from the West are prominent in the show, seen in the very concept of cowboys, in the jazz-heavy soundtrack and in countless pop culture references. While getting Cartoon Network to greenlight a show “this dark and fatalistic” was a challenge, according to DeMarco, the series’ impact on the American animation industry couldn’t be missed once it was aired. “Bebop was a key example to distributors and creators that adult storytelling can have a place in animation in the U.S.,” he said.

But similar to its release in Japan, the show was not aired in its entirety during its original run. Cowboy Bebop premiered on Adult Swim in September 2001 just before the 9/11 attacks, and three episodes featuring particular forms of violence—including one that centered on a serial bomber who targets skyscrapers—were cut. Since its initial broadcast, all episodes have been aired in reruns on the programming block. Prior to the release on Adult Swim, Cowboy Bebop was broadcast in countries including Italy and France and aired throughout the world after 2001. Subbed and dubbed versions of the series are now available to stream on platforms like Hulu and Funimation, and Netflix added the original show to its catalogue on Oct. 21.

Cowboy Bebop has one of the most iconic openings in all of anime: the brassy, groovy “Tank!” composed by Yoko Kanno and performed by Seatbelts, the band she formed for the series. But the song is far from the only impressive track on a soundtrack, which includes several music genres, like blues, funk and heavy metal. In a 2020 interview with Dazed, Kanno said she met Watanabe in the mid-90s while working on the mini-series and film Macross Plus. “He asked me, ‘I want to make [Cowboy Bebop] jazz-oriented. Can you make it work?’” she said. “My answer back then was, ‘I think I can, but I don’t think it will sell.’ I’m glad that my prediction has been proven wrong.”

Watanabe and Kanno went on to develop a highly collaborative dynamic, the director shared at a 2013 press conference. “First, let me be on the record as saying [Kanno] does not compose music exactly the way I tell her to,” he said, prompting laughs, according to Anime Superhero. He continued: “There were instances where I heard these songs she created for Cowboy Bebop, took inspiration from them and created new scenes for Cowboy Bebop. And then she would be inspired by these new scenes I’d created, they would give her new ideas for music and she’d come to me with even more music.”

In the interview with Otaquest, Watanabe gave the example of “Green Bird,” a hymn-like song that’s both calming and haunting and first played after a pivotal confrontation between Spike and his nemesis in the episode “Ballad of Fallen Angels.” “The scene at the end of episode five where Spike falls from the window [of a cathedral] was inspired by the song ‘Green Bird,’ and was made without having originally been ordered,” Watanabe said of the memorable sequence. “It’s fair to say Cowboy Bebop is full of such occurrences, and that the project’s music budget may have gone well overboard.”

How the original Cowboy Bebop fits into the live-action adaptation

The live-action series is informed by the musical choices, Christopher Yost, a writer and executive producer on the show, says in a recent featurette from Netflix about Kanno’s return to score the adaptation. The composer says the new project uses “about one-tenth of the music from the original animation.” Showrunner André Nemec said in an interview with Polygon that “Yoko’s involvement in this show to me was paramount to almost everything else.” And John Cho told Vulture, “​​I made sure that [Kanno] was locked in before saying yes … Our iteration minus her would suffer too much.” In addition to Kanno’s participation, the adaptation also sees the return of the Japanese original’s voice actors. The members of the cast are reprising their roles by dubbing the Japanese language track of the Netflix series.

No remakes can fully capture the energy of what Watanabe, Kanno and the team at Sunrise created in 1998. But it’s clear through decisions like bringing Kanno and the original voice actors onboard, preserving the opening theme “Tank!” (whew!) and the attention to detail in adapting specific scenes that Netflix made an effort to pay homage to the anime classic. 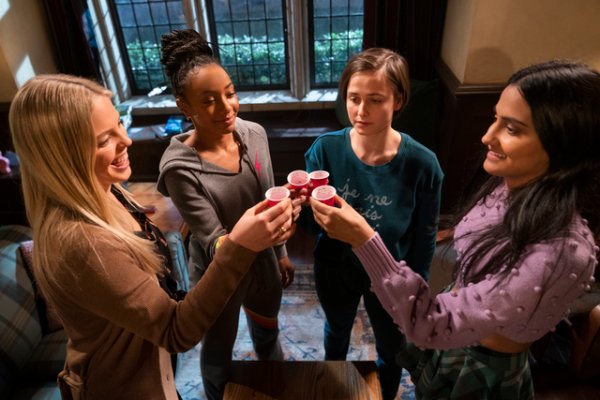 If You Like Sex Education, You’ll Love Mindy Kaling’s The Sex Lives of College Girls
Next Up: Editor's Pick