When Chinese tennis player Peng Shuai seemingly disappeared from public view after posting allegations that a top Chinese official sexually assaulted her, the Women’s Tennis Association made repeated requests to speak to Peng—and demanded that China investigate her allegations.

But, it appears that the the International Olympic Committee (IOC), not the WTA, was the first organization outside China to speak with Peng. The organizing body of the Olympic Games revealed Sunday that IOC President Thomas Bach had a video call with the three-time Olympic athlete.

In a statement, the IOC said Peng was well and asked people to respect her privacy—but it made no mention of Peng’s sexual assault allegation. The opaque nature of the IOC statement, paired with various appearances reported by Chinese state media, left some human rights advocates questioning whether Peng is truly as safe and as free as she seems.

Human rights advocates say the IOC’s intervention in the Peng case shows it chose to side with officials in China—host of the 2022 Winter Olympics in February—instead of athletes.

Human Rights Watch on Monday accused the IOC of undermining its commitment to the rights and safety of athletes. It also criticized the IOC for failing to disclose whether it had offered support to Peng for her sexual assault claims.

“The IOC has vaulted itself from silence about Beijing’s abysmal human rights record to active collaboration with Chinese authorities in undermining freedom of speech and disregarding alleged sexual assault,” said Yaqiu Wang, senior China researcher at Human Rights Watch, in a statement.

President of the International Olympic Committee (IOC) Thomas Bach speaks during a ceremony of the 100-year anniversary of the IOC Executive Board at the monument of Pierre de Coubertin, the founder of the International Olympic Committee, at the Olympic Academy in Ancient Olympia, birthplace of the ancient Olympics in southern Greece on October 17, 2021, a day before the flame-lighting ceremony for the Beijing 2022 Winter Olympics.
Valerie Gache—AFP/Getty Images

Bach had a 30-minute video call with Peng and other committee officials on Sunday, where she told them she was safe in her Beijing home. But the committee opted to stay silent on the sexual assault allegation Peng leveled at retired Vice Premier Zhang Gaoli in a Nov. 2 post on her Weibo, China’s Twitter-like social media platform.

Peng said Zhang had coerced her into having sex with him some three years ago—but added she could not provide any evidence. Censors quickly scrubbed Chinese social media clean of Peng’s allegations, and officials kept mum on media questions about it.

Jules Boykoff, a sports politics expert at Pacific University in Oregon, said Bach showed “ghastly disregard” for Peng’s allegations. “He appears to have shoved the key issue of serious claims of sexual abuse off to the side while simultaneously making his goal quite transparent, which is to essentially create a flimsy cover story for the Chinese authorities so that the games could go on,” Boykoff says.

Asked about these allegations of covering for China, the IOC sent a statement—saying the video call was intended to enquire about Peng’s “well-being and safety” and that “safeguarding the well-being of athletes is paramount to the IOC and the Olympic Movement.” The organization will not comment further.

After pushback from the international community and questions over the safety of athletes at the Olympics, Peng retracted her accusation in a statement that the WTA said was questionable—then reappeared in a series of photos and videos that did not quell questions about her safety and freedom.

Boykoff says Peng’s ordeal will have a “chilling effect” on athletes set to compete in Beijing who have been vocal against injustices in the country.

He believes the IOC’s intervention in the Peng case should shatter the myth that the Games aren’t political. “It definitely points to larger issues with the International Olympic Committee. he says. “Sometimes being neutral means actually taking a side, and this is one of those moments.”

Human Rights Watch called on the IOC to use its influence in China, a country with a history of stifling dissenters, to convince officials to stop censorship of Peng’s case and allow her to leave the country without fear of retaliation. 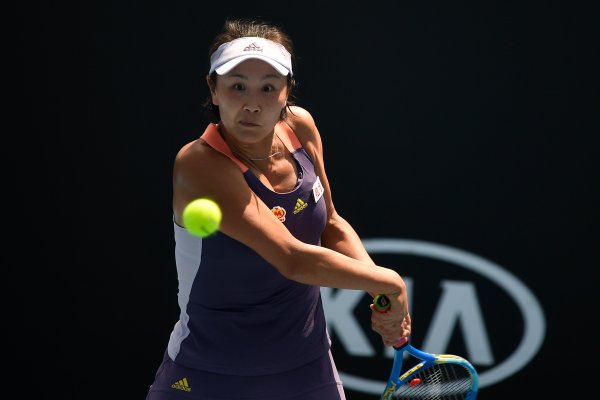 The Head of Women's Tennis On His Fight to Find Peng Shaui
Next Up: Editor's Pick