There Are Mounting Calls for a Boycott of the Beijing 2022 Winter Olympics. Will It Be Effective?

In his two-decade career, Chinese sports journalist and commentator Yan Qiang has had the good fortune to cover five Olympic Games, including the 2008 Beijing Games in his homeland. But there is one of them that is easily his favorite.

“Sydney 2000 was the perfect one,” he tells TIME. “Because there wasn’t too much political interference and people uptight about all kinds of stuff. So the sport was quite pure in Sydney.”

Many athletes and sports fans will sympathize, especially now that the Beijing Winter Games, slated to begin next February, are facing growing calls for a boycott over human rights abuses perpetrated by the Chinese government.

The body of evidence detailing persecution of Uighur Muslims and other minorities in China is now irrefutable, with the leak of the China Cables in November 2019 revealing sweeping extrajudicial detention and surveillance in westernmost Xinjiang province. Since then, the controversy has deepened amid allegations of the forced sterilization of detained women.

Last month, a coalition of 180 rights groups called for a boycott of Beijing 2022 because of these abuses, the erosion of political freedoms in Hong Kong and Tibet, and other concerns. Days later, Canadian lawmakers voted 266-0 to declare the treatment of the Uighurs as genocide—as the Trump administration had done—and urged the International Olympic Committee (IOC) to strip Beijing of the right to host the 2022 Games unless abuses cease.

Former U.S. Ambassador to the U.N. Nikki Haley is among the U.S. figures to have echoed senior officials in the U.K. and E.U. in their calls for a boycott “Between the brutality against the [Uighurs] to the spread of Covid around the world, we should not dignify China with our presence,” Haley tweeted on Mar. 3, referencing the belief that the coronavirus originated in China and was allowed to spread globally because of Beijing’s lack of transparency.

On Feb. 22, Chinese Foreign Minister Wang Yi denied the abuses, instead calling Beijing’s treatment of ethnic minorities in Xinjiang and Tibet a “shining example” of China’s human rights progress. On March 3, Chinese government spokesperson told reporters that demands for a boycott were “doomed to failure.”

The Biden administration has been playing down the idea of a U.S. boycott. But, significantly, when asked where the White House stood on the issue at a recent regular briefing, press secretary Jen Psaki said “There hasn’t been a final decision made.”

A man takes a selfie in front of a screen showing the remaining days till the 2022 Winter Olympics near the Birds Nest stadium, the venue for opening and closing ceremonies, in Beijing on February 4, 2021.
NOEL CELIS/AFP via Getty Images

Many say that attending the Beijing Games will be a “stain on our collective conscience,” as John Jones, campaigns and advocacy manager at U.K.-based NGO Free Tibet, puts it.

Jules Boykoff, a professor at Pacific University in Oregon, who studies the Olympics and represented the U.S. at soccer, says boycotts can matter. He cites the exclusion of apartheid-era South Africa as a a successful example of forcing change, with “athletes putting their careers on the line to stand up for what they believe in.”

But for IOC President Thomas Bach, sporting boycotts by themselves don’t work. In an interview with TIME in December, he said that in South Africa “It was not sport alone,” that helped dismantle racial segregation and oppression in the country. “You had an economic boycott, cultural boycott with regard to apartheid.”

He added: “Our role in this world is, first of all, about sport—and our social role is to unify and not to divide people. We are not a world government and cannot achieve what generations of politicians and U.N. general assemblies have not achieved.”

Opponents of a boycott could also point to the discrepancy of pressuring athletes to sacrifice a shot at Olympic glory while some of the world’s biggest companies continue to make huge profits from China. Unlike American firms choosing to manufacture in China, athletes have no say where the Olympics is held.

“For an athlete, the most important competition of his whole sports career is the Olympic Games,” says Zhang Dan, who won silver for China at figure skating at the 2006 Winter Olympics in Turin. “It’s unfair if the athletes’ competition is affected by the political relations of the country.”

“A boycott would be a joke,” says the commentator Yan. “But you cannot wake someone who pretends to sleep.”

Pro-Tibetan demonstrators, holding a tibetan flag, are detained by plain clothes Greek policemen as they protest and shout anti-Chinese slogans during the handover ceremony of the Olympic flame to China on March 30, 2008 outside the Panathinaiko stadium in Athens.
Kostas Souliotis/AFP via Getty Images

How will China handle an Olympic boycott?

That Beijing will become the first city anywhere to host both a Summer and Winter Olympics is a huge propaganda boost for China’s strongman, President Xi Jinping. But controversy is attached to both events.

While the 2008 Beijing Games are generally remembered as a coming out moment for a resurgent China, they too were clouded by human rights issues, including a crackdown on protests in Tibet than left dozens dead. In Athens, demonstrators chanting “Free Tibet” and brandishing protest banners with “Stop Genocide in Tibet” attempted to block a runner carrying the Olympic flame. Many rights groups similarly demanded a boycott.

In the end, the leaders of over 80 nations attended the opening ceremony in Beijing—more than in any preceding Olympics—in the hope that the Games would help to bring authoritarian China into the international fold. But China has become even more repressive under Xi and nobody is suggesting that the 2022 Games can serve as a catalyst for change.

“I don’t think [Xi] will be deterred,” says Professor Steve Tsang, director of the SOAS China Institute at the University of London. “I am very skeptical that a boycott can be, in any significant way, effective.”

It’s certainly unlikely to cause much domestic embarrassment for the Chinese Communist Party (CCP). In fact, it may only reinforce the CCP’s depiction of the West as jealous of China’s rise, forever attempting to encircle and undermine it.

Wang Yiwei, director of the Institute of International Affairs at Renmin University in Beijing, interprets the U.S. preoccupation with the Xinjiang reeducation camps, for example, as a cynical attempt to equate China to Nazi Germany. “Because the U.S. helped liberate Europe from Germany, so that narrative helps bring Europe closer to the United States,” he says. “The U.S. has this excuse to try to exclude China’s global supply chain in high technology from its democratic allies.”

Read more: IOC President Thomas Bach on Why the Tokyo Games Will Go Ahead

But a boycott could arguably tarnish Beijing’s concerted push to promote winter sports throughout Chinese society. Cost, and a lack of snow in the warmer southern provinces, have been the traditional deterrents to ordinary Chinese. Since being awarded the 2022 Games back in 2015, however, China’s government has set ambitious targets to get 300 million people—almost a quarter of the population—involved in winter sports by 2025. In that year, the government is estimating that the winter sports industry, including resorts, apparel and equipment, will be worth a trillion renminbi (about $144 billion).

The government also plans to have 5,000 schools feature winter sports “prominently” in their curriculum by 2025, reports Xinhua. There are already new ski resorts that can be reached by high-speed rail in just 45 minutes from central Beijing. And there are many Chinese who are optimistic that this newfound enthusiasm for winter sports can present opportunities for engagement with the North American and European nations so dominant in the field.

Given that U.S. President Joe Biden Biden is a self-professed ice hockey fan, and has visited Aspen’s ski slopes many times over recent years, Wang even suggests the Winter Olympics could even be an opportunity to build rapport between the leaders. “This could be the new ping pong [diplomacy], or basketball after Yao Ming,” he says, “helping to form a beautiful friendship between Chinese and American people.”

Adds Zhang, the figure skater, “We can all learn from the spirit of the Olympics, which is faster, higher and stronger. We can’t let politics take away athletes’ aspirations for the Games.” 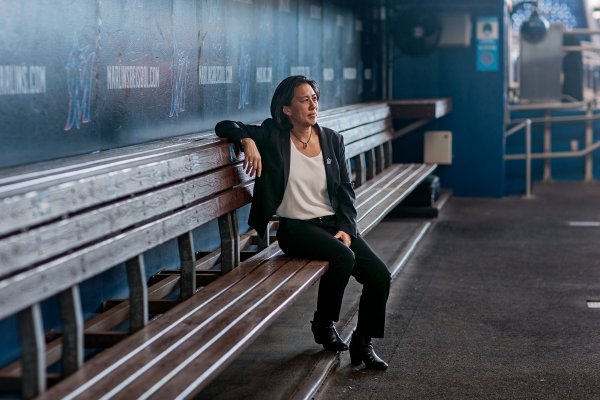