President Dwight D. Eisenhower is shown with his family at Thanksgiving dinner in 1953
Bettmann Archive/Getty
By Denise Kiernan

When President Abraham Lincoln issued his first Thanksgiving proclamation on Oct. 3, 1863, the message landed in the midst of the Civil War. It might have been particularly hard for citizens to hear him note that “[t] he year that is drawing to its close, has been filled with the blessings of fruitful fields and healthful skies,” but nevertheless Lincoln described bounties and gracious gifts, and advances in industry. He invited citizens “in every part of the United States, and also those who are at sea and those who are sojourning in foreign lands,” to join him in thanksgiving the last Thursday of November. Not everyone agreed, and certainly not everyone participated, but an annual tradition began to take hold.

This November, Joe Biden will issue his first Thanksgiving Proclamation as President of the United States. His will be the 159th consecutive such proclamation. Over the years the tone of proclamations has varied widely, with some presidents using the opportunity to highlight—under the guise of gratitude—their own accomplishments during the year. Others came from the heart, penned to rally spirits during dark times. But whether overcooked hams or underdone turkeys, they were all some kind of reflection of the office, the country and the stakes of the given cultural moment.

Read more: Why We Eat Turkey on Thanksgiving

The timing of President Woodrow Wilson’s Thanksgiving proclamation of 1917 found the United States mired in World War I, for example, and provided a unifying message when for many it seemed impossible to find anything for which to be grateful. Wilson wrote that stopping to give thanks was a “custom we can follow now even in the midst of the tragedy of a world shaken by war and immeasurable disaster, in the midst of sorrow and great peril, because even amidst the darkness that has gathered about us we can see the great blessings God has bestowed upon us, blessings that are better than mere peace of mind and prosperity of enterprise.”

Wilson’s proclamation the following year, in November 1918, was issued just five days after the signing of the armistice, and reflected the hope of that moment—even though the world was still suffering from the deadly flu pandemic of that year. “It has long been our custom to turn in the autumn of the year in praise and thanksgiving,” he said. “This year we have special and moving cause to be grateful and to rejoice.”

Once Thanksgiving was finally established by Congress in 1941 as an official holiday, the president no longer needed to “proclaim” which Thursday the holiday would grace. The reprinting of those proclamations became less newsworthy, even as they persisted. It’s like your aunt’s mushy Brussels sprouts: you know they will be served up every year, but no one is really in a hurry to dig in. More attention and press now goes to the annual pardoning of the turkey. (This tradition, as it happens, goes back to Abraham Lincoln’s son Tad, who wanted a turkey that had been gifted to the Lincoln household spared from being eaten at Christmas—not Thanksgiving.)

This week, once again, that proclamation will come. And when it does, what will it say about this particular moment?

As we’ve known for years now, the story of the so-called “first Thanksgiving,” held 400 years ago in 1621, is more legend than history—so it’s only appropriate that, for more than the first 70 years of presidential Thanksgiving proclamations, not one mentioned Pilgrims. Roosevelt was the first to include them, in 1939, and the credit they’ve received for “creating” the holiday was the result of the romanticizing of a historical event. But with each passing year, our richer, fuller understanding is told again, too. There are valid, accurate, often inspirational stories to be told about many historical, diverse, gratitude-filled thanksgivings that still resonate today.

President Biden’s first Thanksgiving proclamation comes on the heels of expanded historical and cultural awareness of our founding myths and stories, and in the midst of an ongoing pandemic and a loud, divisive time. If Roosevelt pushed the Pilgrims, what can Biden do?

The dusty presidential duty of letting the world know Thanksgiving is upon America offers him an opportunity, too: to reclaim the Thanksgiving proclamation and maybe even rescue Thanksgiving from its recent and highly flawed past. His messaging this year, in the midst of our own senses of loss and uncertainty, cannot be an afterthought, some sort of reheating of proclamations past—a turkey tetrazzini of leftover sentiments. Biden should offer a message of unity. Yes. He should broadcast a frank yet uplifting tone for what is yet another holiday season fraught with unpredictability. Absolutely. But he should also lay out, as President, clearly and unflinchingly, the ways in which our national myth about Thanksgiving is not just inaccurate but profoundly insensitive to the Indigenous peoples of this land.

Read more: ‘I Was Teaching a Lot of Misconceptions.’ The Way American Kids Are Learning About the ‘First Thanksgiving’ Is Changing

In doing so, he would satisfy a hunger for accuracy and inspiration, for inclusion and transparency. The one thing that harvest festivals and gatherings and thanksgivings (whether spelled with a big “T” or a small one) throughout time have in common is gratitude. And recent scientific research into the effects of embracing gratitude shows that giving thanks can wield even more power when done in trying times. When it is most difficult to give thanks, doing just that can bestow the deepest benefits. Biden needs to bring the flavor.

So this November, let the White House set an example for us all, as we come together to give thanks. Let’s do it accurately, inclusively, and sincerely.

If we can find common ground of any sort in these times, things for which we may all consider ourselves thankful, we are not only rescuing a holiday, but perhaps even ourselves.

Denise Kiernan is the author of We Gather Together: A Nation Divided, a President in Turmoil, and a Historic Campaign to Embrace Gratitude and Grace, available from Dutton Books.

Correction: The original version of this story misstated when Congress established Thanksgiving as a holiday. It was 1941, not 1943. 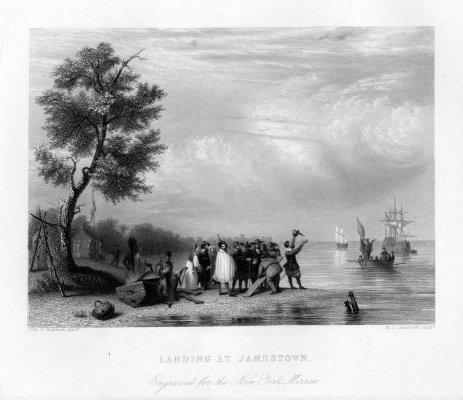 How a Powhatan Tribal Chief Became One of Colonial America’s Greatest Military Leaders
Next Up: Editor's Pick