What We Really Know About the First Thanksgiving

The tryptophan-packed turkey wasn’t the star during the first Thanksgiving—and that’s not the only thing that’s changed in the nearly 400 years since the holiday began.

Much is unknown about the first recorded feast between the Pilgrims and Native Americans in the New World at Plymouth in 1621, as historians have heavily relied on only two primary eyewitness accounts. But while a good meal is a constant, it’s clear that the original festival doesn’t have all that much in common with the all-American holiday recognized today, with its focus on football and, more recently, shopping.

Here are five things we know about the first Thanksgiving:

1. More than 100 people attended
The Wampanoag Indians who attended the first Thanksgiving had occupied the land for thousands of years and were key to the survival of the colonists during the first year they arrived in 1620, according to the National Museum of the American Indian. After the Pilgrims successfully harvested their first crops in autumn 1621, at least 140 people gathered to eat and partake in games, historians say. No one knows exactly what prompted the two groups to dine together, but there were at least 90 native men and 50 Englishmen present, according to Kathleen Wall, a colonial foodways culinarian at Plimoth Plantation. They most likely ran races and shot at marks as forms of entertainment, Wall said. The English likely ate off of tables, while the native people dined on the ground.

2. They ate for three days
The festivities went on for three days, according to primary accounts. The nearest village of native Wampanoag people traveled on foot for about two days to attend, Wall said. “It takes so long to get somewhere, that once you get there you stay a while,” she said.

3. Deer topped the menu
Venison headlined the meal, although there was a healthy selection of fowl and fish, according to the Pilgrim Hall Museum, which cited writings by Plymouth leaders Edward Winslow and William Bradford. There was a “great store of wild turkeys” to be eaten, as well as ducks and geese, wrote Bradford, who was the governor. Winslow said Massasoit, the leader of the Wampanoag people, contributed five deer to the dinner.

4. It wasn’t called Thanksgiving
There’s no evidence that the 1621 feast was called Thanksgiving, and the event was not repeated for at least a decade, experts say. Still, it is said to be the inspiration behind the now traditional annual gathering and a testament to the cooperation of two groups of people. It showed “two communities that are diplomatically connected coming together,” said Richard Pickering, Plimoth Plantation’s deputy executive director. Abraham Lincoln officially declared Thanksgiving a national holiday by proclamation in 1863.

5. The peace was short-lived
Early European colonizers and Native Americans lived in peace through a symbiotic relationship for about 10 years until thousands of additional settlers arrived, Pickering said. Up to 25,000 Englishmen landed in the New World between 1630 and 1642, after a plague drastically cut the native population by what’s believed to be more than half, he said.

The arrival of new settlers prompted a fight for land and rising animosity. War exploded in 1675, years after Massasoit and Bradford died and power fell to their successors.

Many Native Americans have long marked Thanksgiving as a day of somber remembrance.

Jacqueline Keeler, a member of the Dineh Nation and the Yankton Dakota Sioux who lives in Oregon, observes Thanksgiving with her family but doesn’t think of it as a national holiday the way the rest of the country does.

“Thanksgiving tells a story that is convenient for Americans,” Keeler said. “[But] it’s a celebration of our survival. I recognize it as a chance for my family to come together as survivors, pretty much in defiance.” 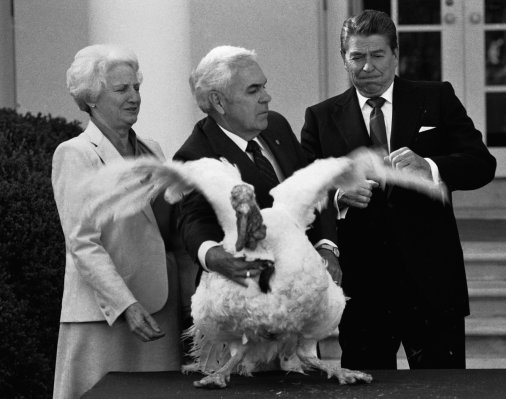 See the Evolution of the Presidential Turkey Pardon
Next Up: Editor's Pick