Why We Eat Turkey on Thanksgiving

circa 1945: A little girl sits at a table laden with dishes on Thanksgiving, watching anxiously as a man carves the turkey.
American Stock Archive / Getty Images
By Emelyn Rude

As Americans sit down to supper this Thanksgiving, the centerpiece of their celebratory dinners will, most likely, be a turkey. Why exactly the Turkey has been the star of “Turkey Day” since at least the mid-19th century is a matter of much debate, particularly given the consensus amongst historians that the Pilgrims and the Native Americans probably didn’t focus on the bird at the “First Thanksgiving” in 1621.

Some give credit for the turkey’s preeminence to Sarah Joseph Hale, the “Godmother of Thanksgiving,” whose accounts of early New England celebrations emphasized a roast turkey and eventually became the model for the festivities adopted by the rest of the country after Abraham Lincoln declared it a national holiday in 1863. Others credit the bird’s existing role in English celebratory feasts and the fact that its large size made it a practical item for such affairs. Others still believe it is because the turkey’s position as the most American of feathered creatures—Benjamin Franklin, after all, thought it a much more “respectable bird” than the Bald Eagle—makes it a fitting entrée for one of the most American of holidays.

How exactly the turkey arrived at our forefather’s tables is much less of a mystery: The turkeys walked there.

“Many have been the tales of the great cattle drives. Hardly anyone remembers the great turkey walks,” recounts author Kathleen Karr in her book The Great Turkey Walk. And indeed, in antebellum America a parade of thousands of turkeys gobbling their way down country roads to urban markets was a regular sight in the weeks before Thanksgiving. Vermont turkeys hiked their way to Boston, Kentucky and Tennessee turkeys marched proudly into Richmond, and some Western birds even found themselves driven the thousands of miles between Missouri and Colorado.

The task of the turkey drover, as the individuals who herded the turkeys on these journeys were known, was no easy one. Roads in the late 18th and 19th centuries in the United States were generally pretty bad and accounts of the great turkey drives recall the flocks bravely fording streams and climbing rocky hills, or flying over lakes and rivers at least a mile across. In such conditions, according to one contemporaneous observer, the birds “were apt to crowd together and trample each other to death.” Should the birds become frightened, as turkeys are very want to do, “a cattle stampede [was] a tamer affair.”

The long march of the turkeys was a slow business as well, with flocks typically ambling at a top speed of one mile per hour. If a drover were lucky, throwing out enough corn and applying enough guidance with his long pole—topped with a red piece of cloth said to strike fear into the heart of even the most quarrelsome of turkeys—a turkey drive could cover 20 miles in a single day.

Each night it was the particular habit of the turkeys to roost in adjacent trees and bushes until the following morning. Once the turkeys took the inclination to settle down, an experienced drover knew that “nothing would induce them to continue the march to the slaughtering pens.” Much to the annoyance of their human counterparts, in this behavior the birds often disregarded the actual time of day and mistook an overcast sky or even a heavily shaded portion of the road as indications that the sun was going down. Drovers would sometimes walk miles out of their way to avoid densely wooded spots that might tempt their birds to stop for the night, but even then a few errant bushes or the fine shrubbery of a Capitol Square would induce the turkeys to roost for the remainder of the day.

While the modern turkey barely walks at all, these massive forced migrations of birds occurred well into the 1930s in some regions of the United States, particularly in the turkey towns of Texas, which held great celebratory “Turkey Trots” for the birds streaming in by the thousands for the slaughter.

Upon sitting down to a lackluster, turkey-less Thanksgiving feast at the turn of the 19th century, founding father Alexander Hamilton once remarked, “No citizen of the U.S. shall refrain from turkey on Thanksgiving Day.” And while such a proclamation is now fulfilled by railroad cars and refrigerated semi-trucks, for centuries this bold cry was only possible thanks to the men and women who literally walked these birds from farm to table. 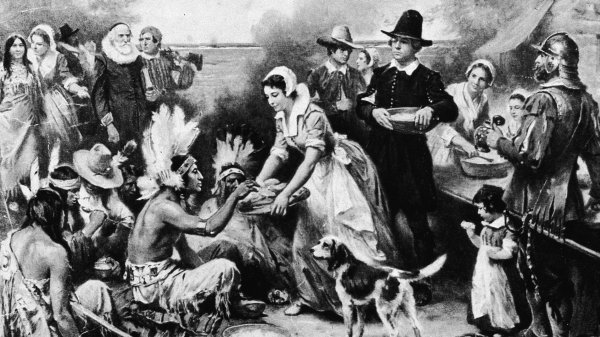 5 Things You Didn't Know About the History of Thanksgiving
Next Up: Editor's Pick