It hardly mattered whether you cared about tennis or not: In the mid-to-late 1990s, when Venus and Serena Williams blazed onto the scene, nearly everyone loved them—and those who didn’t were people you didn’t want to know. These young women were distinctive on the tiresomely chalk-white tennis scene because they were Black, and they’d come from Compton. But they were also unstoppable as athletes and exuberantly charming as individuals. Often young athletes seem to have been more groomed than raised. But something about these two suggested that, in addition to having been coached in their sport from a tender age by their parents, Richard Williams and Oracene “Brandy” Price, they’d also been brought up right. They were superstars you might actually like to know.

The man who, along with his wife, made that possible now has his own movie, King Richard, in which he’s played by Will Smith. As with all movies based on real people, you can assume director Reinaldo Marcus Green (Monsters and Men) and writer Zach Baylin took some liberties with the facts; it’s always necessary to elide and condense for drama’s sake. But as a story of how two little girls worked hard for their success, supported and encouraged by parents who believed in them, it’s wholly satisfying; the picture skims along on its own ambitious energy, and on the strength of just about every one of its performances. It’s one of those crowd-pleasing movies that doesn’t make you feel embarrassed to be part of the crowd—you feel buoyed rather than talked down to.

King Richard opens with some old-fashioned shoe-leather enterprise. Smith’s Richard Williams—who, we learn, grew up in Louisiana before ending up in Compton, neither place particularly hospitable to a Black tennis fan—had a plan for his two daughters, Venus (Saniyya Sidney) and Serena (Demi Singleton) before they were even born: To turn them into champion athletes. To that end, he allows—or maybe urges—them to practice often, even during the rain, which raises an eyebrow or two in the neighborhood. Does this constitute a kind of child abuse? But the girls clearly love it, and the whole family joins in the act of spectatorship: Richard regularly packs the whole clan—all girls, five in total—into his van and heads off to the local, decidedly un-luxurious, tennis courts. Mother Brandy (Aunjanue Ellis, in a terrific performance that brings the movie to Earth when it teeters toward hagiography) seems to be the chief breadwinner, though she steps in as coach at a crucial moment. Both are aligned with a single goal in sight, and Richard treks doggedly to one fancy white tennis club after another, seeking a good coach for his two budding stars, even though he’s unable to pay. You can imagine how many of them say no, or even laugh at him outright.

One coach, Tony Goldwyn’s Paul Cohen, finally takes notice of the girls’ gifts, though he’ll accept only one of them, and he chooses Venus. It’s her story that largely unfolds throughout King Richard, though the picture is so skillful that Serena rarely disappears from it: The film addresses her early disappointment without ever losing sight of the player, and the woman, she’ll eventually become. Sidney and Singleton are wonderful in these roles. They give us Venus and Serena as kids at play, ambitious and hardworking but also joyful in the mission their parents have given them, one that they clearly want for themselves as well. There’s a lightness to these performances that you might not expect in a movie about two young people who will eventually become the very best at what they do; they’re humans, always, and never sports robots.

Mostly, though, this is Richard’s saga. Smith is one of those actors who’s so perpetually likable that many critics I know practically will themselves not to like him. But no matter where you stand on the types of movies he favors (often inspirational, for better or worse), or on his gifts overall as a performer, what he does in King Richard is remarkable. The movie gets us on his side early. His efforts are the grass-roots type. He makes amateurish videos about the girls; he Xeroxes little pamphlets extolling their talents. With the two of them at his side, he strides into club after tony white club, undaunted by rejection. But when one prospective coach laughs at the video he’s made, something clicks on in him—a complicated blend of embarrassment and despair—and his eyes go suddenly, unbearably blank.

The mood doesn’t last long. Yet the movie needs this complexity. It also needs to show us how overbearing Richard can be, and how he’s sometimes so goal-oriented that he doesn’t recognize certain things his girls—or, for that matter, his wife—need in the moment. Smith plays Richard’s proud-papa peacock act to the hilt—but without vanity, he also shows us this man’s stubborn, self-centered side. In the end, Richard Williams’ plan worked out—his girls became world champions. But he pulled off something else too: they became people we never want to lose sight of, people we care about whether they’re on the court or off. He’s a king who put queens before us, knowing how wonderful they were and certain that we’d see it too. He didn’t create them, but he created a space for us to believe in them. King Richard shows us how he fought for that space, inch by inch and match by match. 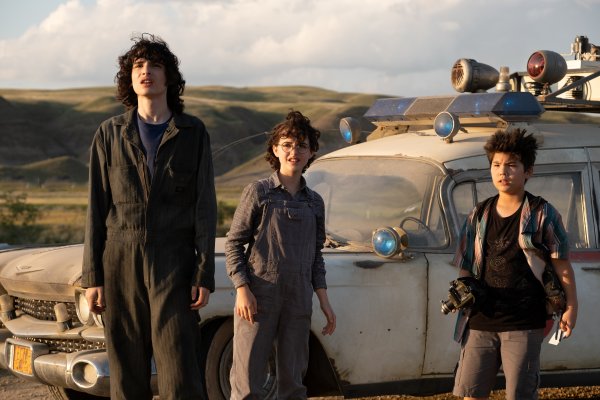 Ghostbusters: Afterlife Is Excessively Eager To Please
Next Up: Editor's Pick