In King Richard, the new biopic chronicling the rise of the superstar tennis sisters each now known by one name—Venus and Serena—the protagonist Richard Williams, played with standout moxie by Will Smith, acts on a familiar parental impulse. Who among us hasn’t spouted off about the talents of our dear children to anyone within earshot? Richard, however, always possessed a supernatural level of confidence in the athletic abilities of his two youngest daughters. Parenting handbooks would tell you to set reasonable expectations for your children. Richard literally wrote his own plan: a 78-page blueprint for turning Venus and Serena into legends. “I’m in the champion-raising business,” Richard says at one point in the film.

Early on, in the movie as in real life, the lily-white tennis establishment resisted Richard’s conviction that these young Black girls, who learned the game on the cracked, weedy courts of Compton, Calif., would redefine the game. One racist onscreen coach asks Richard if he’s considered basketball for his daughters. Richard sends tennis footage of the girls, shot on an ’80s-era camcorder, to noted instructor Vic Braden (Kevin Dunn). In a meeting with Richard, Braden, though impressed, explains why he can’t take on Venus and Serena as pupils. “It’s like asking somebody to believe that you have the next two Mozarts living in your house,” he tells their unrelenting dad.

Once it’s apparent that the sisters are the real deal, another coach tells Richard he might have the next Michael Jordan on his hands. He doubles down, naturally. Richard tells him he has “the next two.”

Smith’s performance has earned him early Oscar buzz. When King Richard, directed by Reinaldo Marcus Green and out in theaters and streaming on HBO Max on Nov. 19, premiered at the Telluride Film Festival in September, the crowd cheered during the closing credits. And although audiences know the ultimate ending—Richard’s plan worked just fine; the Williams sisters own 30 Grand Slam singles titles between them—the movie manages to hook viewers as though the outcome were a mystery, especially during the climactic tennis sequence. Even close Williams watchers might not recall whether or not Venus, at just 14, upset then world No. 2 Arantxa Sánchez Vicario in 1994 (and I won’t spoil it here).

Over the Thanksgiving holiday, families are sure to take in King Richard together over popcorn or leftover stuffing. Venus and Serena, played charmingly by Saniyya Sidney and Demi Singleton, respectively, offer plenty of inspiration for the kids. For dads and moms—of athletes, piano players, premed students and more—both the movie and the improbable real-life saga provide a chance to forget those guidebooks and “rules” for a few hours and take stock. What kind of parents are we? And what kind of parents do we want to be?

Not that anyone could really duplicate the Williams’ story. Though the film is a flattering portrait of the irascible Richard—to be expected for a movie in which Venus, Serena and their older sister Isha Price served as executive producers—it’s not without criticism of his unorthodox approach, nor does it completely sugarcoat his more maddening qualities. The movie’s most searing scene involves Richard’s then wife Oracene Price, who in a fine piece of acting by Aunjanue Ellis gets her oft-overlooked due for helping keep Richard’s plan for their daughters on course, calling out her husband’s past failures and inflated ego.

The story largely stays true to Williams family lore. Yes, according to Richard’s 2014 memoir Black and White: The Way I See It, a nosy neighbor called the cops on him, convinced he was abusing his daughters. Yes, Sánchez Vicario took an unsporting bathroom break in her ’94 duel with Venus that threw the green teen off. But the film takes some liberties. While Richard writes about the time he grabbed a gun to hunt down the Compton gang members who beat him up on the tennis courts, one of them wasn’t killed in a drive-by shooting just as Richard nearly pulled the trigger on him, as the movie depicts. In the book, the gang members take off when they see an armed Richard approaching; he later discovers one of them is dead.

Long before the events of the movie begin, Richard hatched his plan to have two more daughters and turn them into tennis champs after watching, on television, Virginia Ruzici of Romania receive a $20,000 check for winning a tournament in 1978. Only two things were missing: the actual children, and any working knowledge of tennis. Venus and Serena would soon arrive. Richard learned the game by taking lessons from a guy named Old Whiskey, whom he said he paid in booze. Before Venus turned 3, Williams moved his family from Long Beach, a block from the coast, to Compton. “It would make them tough,” he wrote. “Give them a fighter’s mentality.”

Corey Gauff, whose daughter Coco stormed onto the tennis scene in 2019 when she beat Venus at Wimbledon, is one of the few parents to successfully copy at least parts of the Richard Williams blueprint. While Corey never needed Old Whiskey’s services—he grew up playing the game—he’s also found great success coaching his daughter. At 17, Coco is ranked 17th in the world. “The biggest thing he and his daughters did was let me know that it is possible,” Corey tells TIME. “And it’s O.K. to do it your way.”

Richard’s braggadocio is not for everyone. But King Richard turns the lens disapprovingly on the country-club parents who resented Venus’ 63 consecutive wins at junior matches. They yell at their kids. One dad implores his daughter to cheat. When the cops arrive at Richard’s Compton house, he suggests they arrest the other tennis parents. The viewer can’t help but laugh in agreement.

And if you look past Richard’s carnival barking, you’ll find him homing in on two key tenets of success: patience and practice. Amid Venus’ stunning youth winning streak, Richard pulled her from the circuit, on the advice of only himself. Richard had seen other young sensations who preceded his daughters, like Tracy Austin and Jennifer Capriati, suffer from injuries and burnout. He wanted to slow things down and emphasize education. When the sisters moved to Florida to train at tennis academies, they attended school and got good grades. “Education is a good foundation, but it also makes you a better athlete,” says Corey Gauff, whose wife Candi, a professional educator, homeschools Coco. “The brain is a muscle too, right?”

By keeping Venus out of tournaments, Richard also gave her more time to hone her skills in training. America’s youth-sports culture emphasizes constant competition, especially in today’s era, where athletes are incentivized to specialize and secure ridiculous rankings to be broadcast on social media earlier and earlier in life. All the travel and showcasing leave little time for actual improvement. It’s almost as if Richard spotted the “10,000-hour rule”—research disseminated through Malcolm Gladwell’s 2008 book, Outliers, touting the benefits of deliberate practice—more than a decade ahead of its time.

The result: the sisters have made millions, launched fashion brands and speak multiple languages. While they were developing outside interests earlier in their careers, pundits questioned their true dedication to the game. Venus is 41; Serena is 40. They’re still playing on tour.

None of this is easy. The benefits of practice are no secret. But when you’re all too aware that your neighbors’ kids are playing in this travel tournament this weekend, and that travel tournament the week after that, the FOMO is real for both parent and child.

As a spectator watching my own son, who’s now 15, play youth sports, on far too many occasions I’ve stomped a foot in frustration, or buried my head in my hands, after a disappointing play. Not the best display of patience. If he spots me doing this, I know his confidence will only suffer. I feel terrible afterward, and swear I’ll never do that again. I do it again.

“In all matters, including tennis, I decided I would always be their father first,” Richard wrote. “It was the best decision I have ever made. I have seen so much damage in this world done by parents who take the other road.” Richard pushed his daughters to succeed, but it’s clear he avoided damaging their psyches, unlike more notorious tennis dads like Stefano Capriati, who admitted he put too much pressure on his early-’90s phenom daughter, or Jim Pierce, who was accused by daughter Mary of physical and verbal abuse; at one point she filed a restraining order against him. If Richard crossed a line, it’s highly doubtful his daughters would produce King Richard in his honor.

Be a father first. Seems like the winning formula. You likely won’t achieve the same results as Richard Williams. Don’t expect to be portrayed by a world-famous actor down the road. But do expect the love and respect of your kids. That’s worth more than any Oscar. 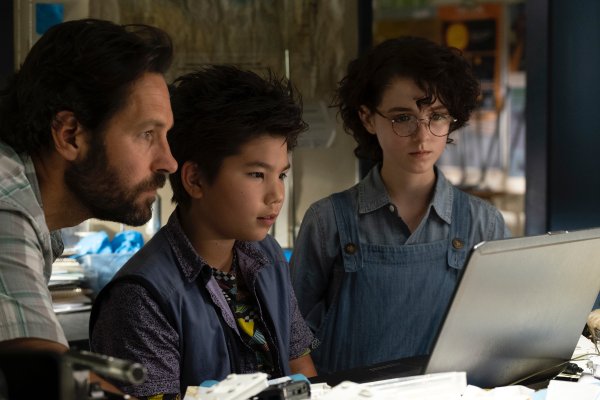 How Ghostbusters: Afterlife Fits Into the Long-Running Franchise
Next Up: Editor's Pick