Movies about childless adults learning great life lessons from children are generally a terrible idea—unless they’re made by Mike Mills, whose semi-autobiographical reflections on his own upbringing resulted in the marvelous 20th Century Women, one of the finest films of 2016. In Mills’ C’mon C’mon, Joaquin Phoenix plays Johnny, a New York City radio journalist who agrees to look after his nine-year-old nephew, Jesse (Woody Norman), a Los Angeles kid, while his sister, Viv (Gaby Hoffman, always a delight to see), tends to some emotionally complicated family business.

Johnny isn’t used to being around children, and at first has no idea what to do with Jesse, an exceptionally bright kid who, thanks to his mother, is well-schooled in talking about his feelings. (One of his favorite games is to pretend he’s an orphan with a tragic backstory, a rather odd quirk that Viv indulges.) But once Johnny gets past the usual speedbumps of recognizing that kids don’t always behave or react as you expect, these two strike an accord. Johnny persuades Viv to let him take Jesse on the road with him—first to New York and later to New Orleans—as he works on a project that involves interviewing school kids about their hopes for the future. Their time together changes them both—each learns to flex to accommodate the moods and feelings of the other, making both of their worlds just a little bigger, and a lot better.

Mills is one of the few filmmakers you could trust with a story like this; he never lets the proceedings veer into sentimentality. Maybe what he’s really doing is exploring the weight and texture of future childhood memories. Grown-ups always want to create “memorable experiences” for kids, but the reality—whether adults like it or not—is that you can’t program memories in advance. The human memory is analog, not digital, and as Johnny gets Jesse acclimated to New York—so different from Los Angeles, with its cheerfully gloomy weather and its gridlike streets made for walking—we can almost see those future memories taking shape. It doesn’t hurt that C’mon C’mon has been shot in lustrous, intimate black-and-white by ace cinematographer Robbie Ryan: he captures New York, especially, in all its ordinary, ornery beauty.

And it’s been easy to forget that Phoenix, who tends to earn accolades for portraying oddballs and troubled loners, is better than almost anyone at playing regular guys occasionally bewildered by life. He’s terrific here, navigating the occasionally puzzling territory of kid logic—like the directness with which Jesse demands to know why he’s single—and dealing with his own flashes of anger when Jesse momentarily disappears from his view on a city street. Phoenix is an alert, perceptive actor, attuned to wavy human signals that might sail by less sensitive performers. And as Jesse, Norman never leans in hard on the cuteness factor. Jesse’s intelligent willfulness is what makes him both unruly and great; Norman instinctively knows not to tame that out of the character. Going into C’mon C’mon, you may think you know exactly what it’s going to be. Coming out, you’ll probably see that you were mostly right, but that you also got a million little firefly flashes of feeling you weren’t expecting. And that right there is the Mike Mills touch. 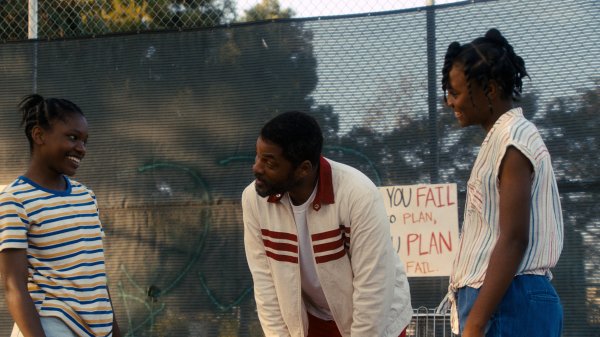 Will Smith and a Dazzling Cast Tell the Story of Venus and Serena Williams in King Richard
Next Up: Editor's Pick