As every Oscar prognosticator in the land focuses on all the films, directors and actors who weren’t nominated for an Academy Award on January 13, the movie with the largest number of nominations chugs on, noisily, like a garbage scow slogging through the night. On Monday, Todd Phillips’ revisionist origin story Joker received 11 nominations, including Best Picture, Best Director, Best Actor, Best Clown on a Staircase Dance Set to a Football Stadium Favorite Recorded by a Convicted Child Molester, and so forth. You could spin the narrative of Joker‘s success this way: Somehow this dystopian picture about a mentally anguished young man—played by Joaquin Phoenix—who’s driven to a killing spree because he was failed by society has surged ahead of more traditional contenders to become an Oscar frontrunner. It’s the Hollywood success story of the season: At last, a movie based on comic-book source material has been recognized as art! The poor little underdog finally has a shot at winning.

At least, that’s one way of looking at Joker’s Oscar-nomination sweep. And it lines up with the way Phillips himself spoke of the movie, in an interview he gave to The Wrap in September, shortly after his movie won the top prize at the Venice Film Festival but also after it came under attack both from people who feared it might spur gun violence and from people who merely thought it was a bad, stupid, ugly movie with a toxic heart. (I’m in the latter camp.) In the interview, Phillips explains what he aimed to do from the start: “We didn’t make the movie to push buttons,” he said. “I literally described to Joaquin at one point in those three months as like, ‘Look at this as a way to sneak a real movie in the studio system under the guise of a comic book film.’ It wasn’t, ‘We want to glorify this behavior.’ It was literally like ‘Let’s make a real movie with a real budget and we’ll call it f–ing Joker.’ That’s what it was.”

In the same interview, Phillips lamented what he saw as closed-mindedness among people who had spoken out against the film. “I’m surprised… Isn’t it good to have these discussions? Isn’t it good to have these discussions about these movies, about violence? Why is that a bad thing if the movie does lead to a discourse about it?” But Phillips’ response to what he saw as a “far-left” attack on his heartfelt “real movie” betrayed more than a hint of sourness: “What’s outstanding to me in this discourse in this movie is how easily the far left can sound like the far right when it suits their agenda. It’s really been eye opening for me.”

In Phillips’ defense, there were—and continue to be—many who have spoken out against Joker without bothering to see it. Also he’s right about this: art doesn’t cause violence, and can’t be held responsible for any act of violence that might occur, even if the perpetrator claims or appears to have been influenced by that art.

But none of that makes Joker a good movie. And the steady but also somewhat predictable box-office climb of Joker doesn’t make the picture a great dark-horse story. The movie brought in roughly $96 million domestically on its opening weekend, and as of early January had grossed more than $1 billion worldwide; relative to its comparatively modest $62.5-million budget, it’s one of the most profitable comic-book movies of all time.

Critics, to the degree that they matter in the larger conversation—especially the awards conversation—were divided on Joker: Some loved it, some loved it with reservations, some hated it outright. The filmmaking has a blunt, garish energy—it borrows heavily from Martin Scorsese, both in its story line and its filmmaking style, though it doesn’t have the fine-grained emotional texture of even Scorsese’s grittiest films, like Taxi Driver or Mean Streets. And while many love Phoenix’s performance, it does come off as the kind of showy, Method signpost acting that the Academy often responds to. Phoenix is a generally marvelous actor who’s capable of great subtlety even when he’s playing larger-than-life characters, as in James Mangold’s Johnny Cash biopic Walk the Line. His performance in Joker is broad, assertive, physically disciplined—and strangely forced and empty.

Yet he, Phillips and the movie overall have become standard bearers for many comic-book fans who believe their lifelong obsession is still frowned upon by society. It doesn’t matter that films based on Marvel characters—and, to a lesser extent, DC characters—currently make so much money at the box office that they eclipse nearly every other big-studio project. If comic-book fans are such an oppressed minority, why is so much Hollywood product being tailored specifically to their desires, at the expense of nearly all other types of movies—movies about regular humans with jobs and problems and love lives, or even so-called dumb comedies that carry a spark of genius (think Dumb and Dumber or Step Brothers)?

That’s not to say that a movie adapted from a comic book can never be a work of artistry. Black Panther, also a crowd pleaser and the only other comic book adaptation to receive an Oscar nomination for Best Picture,, was a beautifully made picture with a generous spirit. But even if its many supporters were passionate, the discourse around it never reached the level of acidic aggressiveness that’s been swirling around Joker since its release. Everyone wants to be the put-upon underdog, and both Joker and the success of Joker play to that self-centered impulse. In a recent interview in the Paris Review, Anna Wiener—author of the newly published memoir Uncanny Valley—said, “I think people are incredibly reluctant to surrender that underdog identity, regardless of how true it was, then or now.” Wiener was talking about Silicon Valley’s shift over the past 20 years from countercultural idealism to venture-capital-fueled libertarianism, but the same goes for comic-book fans: They have so much invested in their vision of themselves as misunderstood, tyrannized misfits that they can never let go. They’re now louder and more powerful than ever. Give them all the Academy Awards. Or else. 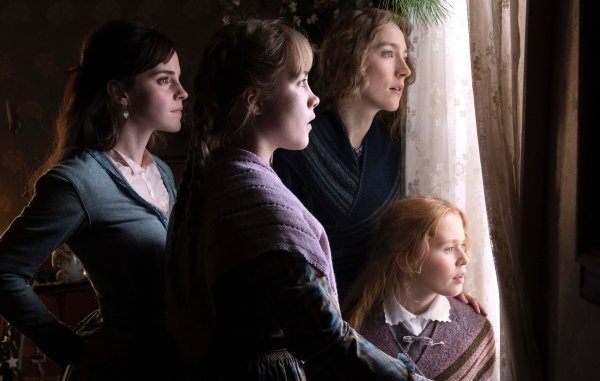 Greta Gerwig Didn't Get a Best Director Nod. But the Radical Triumph of Little Women Will Outlive the Oscars
Next Up: Editor's Pick