'We're Not Going to Be Placated.' Young Activists at COP26 Are Refusing to Settle

You won’t fool the children of the revolution. British glam rock band T-Rex issued this warning in a single back in 1972 (just five years before oil company Exxon quietly received its first report about the warming impact of fossil fuels). But it has rarely felt as relevant as it does at COP26.

Today’s young people are coming of age just as the climate that allowed previous generations to thrive on this planet has begun to visibly break down—but just before our last chance to stop it becoming unlivable slips away. That clear injustice gives youth activists a special moral authority at U.N. climate summits: they’re celebrated with a “youth day,” invited to speak on panels and praised in speech after speech by world leaders for giving the rest of us hope. The attention has only grown since the school strikes movement, led by Swedish teenager Greta Thunberg, took off globally in 2019.

Read More: Vulnerable Countries Haven’t Had Equal Access to COP26. Can They Still Shape the Talks?

But increasingly, those activists are saying it’s all meaningless. “Leaders keep praising young people for standing up and protesting,” Vanessa Nakate, 24-year-old Ugandan activist, said during an interview for a short TIME documentary on youth activists launched Friday at COP26. “But saving the world needs decisions from the leaders.”

Young people worry their presence at the summit is becoming tokenistic. “I feel lost, like I’m here as an ornament or to tell reporters what gives me hope over and over and over,” 16-year-old U.S. activist Alexandria Villaseñor tweeted on Thursday, claiming that she had been blocked from observing negotiations. Others report that young people of color have been silenced during discussions.

Tens of thousands of mostly young people marched through the chilly streets of Glasgow today to condemn the failure of the U.N. process to produce concrete change. They carried signs reading, “Dinnae dawdle, climate justice now!” (using the Scottish form of don’t) and “We want to die of old age,” while singing barbed criticism of certain prime ministers. Earlier in the week, Swedish 18-year-old Greta Thunberg voiced her frustration at a small gathering of protesters near the summit site: “No more of whatever the f*ck they’re doing in there!”

In fairness to those inside the summit, many of the 20,000 delegates inside have been working for decades to push climate action forward. They’ve had wins: including the 2015 Paris agreement. And, as of this week, net zero pledges from every major emitter, diplomatic agreements to reduce methane emissions, end deforestation, cut off coal finance and more.

Some worry, though, that this week’s onslaught of headline-grabbing announcements about the future serve only to distract from the fact that little in the present is changing: in many countries the on-the-ground work to decarbonize is barely underway, while governments are still approving and subsidizing fossil fuel projects against scientific advice and failing to deliver on their climate finance commitments for poorer countries. Added together, current national commitments, analyzed by the U.N. on Thursday, would see global greenhouse gas emissions rise by 13.7% in 2030 over 2010 levels. Climate scientists say they need to fall by 50% by that date to prevent a disastrous average temperature rise above 1.5°C.

Youth activists call this state of affairs “climate delay.” Almost no mainstream political or business leader is denying that climate change is a problem, and nearly all are promising to cut emissions—but not right now, in a few years, if someone else does it first. It’s harder to spot and a much more insidious threat to action.

Calling out climate delay has become the center of young people’s role at COP26. For example, medical student Mikaela Loach is in Glasgow to highlight her lawsuit against the U.K. government—a self-proclaimed climate leader—over what she calls unlawful oil and gas subsidies. Youth activists are using panel appearances to reframe carbon offsets as a controversial way for rich countries to put off emissions cuts at home. Others have made life awkward for officials at the summit, confronting them over contradictory policies as they pose for photos.

“It’s really important that this conference isn’t just used as a basically PR event, which it currently seems like it is,” Joycelyn Longdon, a 24-year-old PHD student and activist focused on climate justice education, told me yesterday on her way up to COP26 from London. “Something that is different about Gen Z is that we’re not going to be placated by platitudes or things that are comfortable [for leaders to do]. We have this sort of tenacity to keep pushing and pushing and pushing for better.”

That’s not to discount the work that older people have done and continue to do on climate, and all other kinds of activism, Longdon says. “Youth and youth action is really more of a mindset—of not settling.” In every generation, some people keep that mindset as they age, and some lose it. With the chaos of climate change set to shape their lives, today’s young people might be the first to buck that trend. 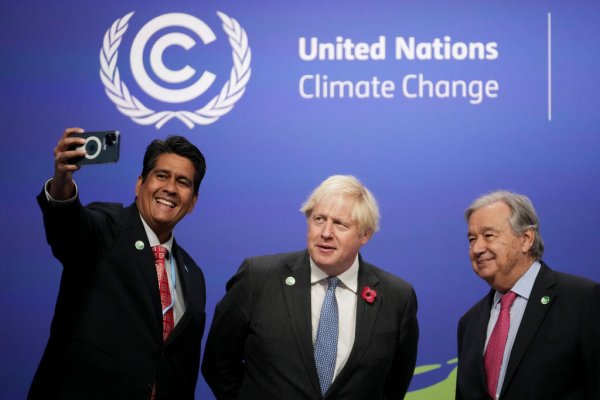