A Methane Pledge Is the First Good News Out of COP26. Nothing Else Will Be as Easy

Tuesday’s announcement that more than 100 countries have joined a U.S. and E.U.-led coalition to cut 30% of methane emissions by 2030 injected a welcome burst of energy into the COP 26 meetings in Glasgow after Monday’s lackluster launch. Despite the fact that the world’s biggest methane emitters—China, Russia and India, which together contribute 35% of methane emissions—have not signed on, it’s a significant step that could go a long way toward meeting the climate conference’s goal of limiting global warming to 1.5°C above pre-industrial levels. Methane, which comes from landfills, agriculture and the energy industry, is the second-largest contributor to global warming after carbon dioxide and is responsible for more than a quarter of current global warming, says Ilissa Ocko, senior climate scientist at the Environmental Defense Fund (EDF). “Cutting methane is the fastest, most effective way to slow down warming now.” The pledged reductions alone would slash warming projections by 0.2°C, according to the United Nations Global Methane Assessment.

But while important, the announcement doesn’t necessarily set the stage for a cascade of similarly game-changing climate pledges going forward. Methane emission reductions from oil and gas production are the low-hanging fruit of the climate crisis: easy to fix with existing technology, and easy to track. Methane is the principal component of the natural gas used for cooking, heating and energy generation. When it leaks from natural gas lines or oil wells it is essentially a lost product that, if captured, could be sold at profit, offsetting the cost of fixing the leaks. Human activity accounts for about 60% of global methane emissions annually, and about a third of that comes from the fossil fuel industry, according to the International Energy Agency’s 2020 Methane Tracker. Unlike carbon dioxide, which is a by-product of fossil fuel combustion, no one wants to actually emit methane, it’s just that up until recently, no one noticed, or cared, if it escaped into the atmosphere.

No one except for climate scientists, that is. When methane goes directly into the atmosphere, instead of being burned, it is 80 times more effective at trapping heat than carbon dioxide over the first 20 years. Think of it as a cashmere sweater for the planet instead of a polyester blouse. When the sweater is removed, the immediate effects of warming, such as melting the polar ice caps, slows down. That has a global impact. When arctic permafrost thaws, it releases more greenhouse gasses into the atmosphere, creating a dangerous feedback loop that accelerates warming even further. Anything that slows short term warming is a long-term win for the climate, says Matt Watson, the EDF’s Vice President of Energy. “Methane is short-lived but powerful. If you stop putting it in the atmosphere today, it will have a really big effect on temperatures even by mid-century.”

And cutting methane emissions, at least from fossil fuel producers, is relatively straightforward. Leaky pipes can be fixed, valves can be closed, and oil rigs capped with existing technology. “It’s not rocket science,” says Ocko in a recent TED talk. “It’s more like plumbing.” According to the U.N.’s global methane assessment, up to 80% of measures necessary to stop methane leaks from oil and gas operations, and 98% from coal, could be implemented at no cost, and could even increase savings when the methane is captured and sold. A new network of satellites designed to locate and measure methane from space can spot leaks with precision, providing an easy monitoring—and policing—solution for international bodies tasked with upholding emissions pledge agreements.

All of this means that not only is cutting methane emissions good for the environment, it is a relatively painless ask (although the U.S. oil and gas industry is up in arms over the Biden Administration’s proposed limits). The risk is that the reductions stop with methane, and countries and industries that are major fossil fuel emitters use their methane pledges as a fig leaf to make natural gas appear more palatable instead of something that will eventually have to be abandoned in pursuit of the 1.5°C goal.

After a decade or so in the atmosphere, methane breaks down, kind of like a cashmere sweater after too many runs through the washing machine. Whereas that polyester blouse will still be going strong for centuries. Which is why reducing methane emissions shouldn’t be a stand in for cutting carbon, says Ocko. “It’s very important that we make it clear that reducing methane emissions is not a substitute for reducing carbon dioxide emissions. If we focus on carbon dioxide and forget about methane, we lose a real opportunity to address climate change in the coming decades. But we can’t focus on methane at the expense of efforts to reduce CO2. Both are needed.”

Even if methane is this year’s low-hanging fruit when it comes to global pledges, it shouldn’t be discounted, says Watson. “Any way you look at it, this [pledge] is a sign of profound progress. Five years ago, methane wasn’t even on the agenda. I’ve never seen another situation where an issue this important went from a complete back-burner issue to the front burner almost overnight.” Watson’s comment reflects how deeply fossil fuel imagery has crept into our vernacular, an inadvertent indication of how difficult it might be to remove emissions from our lives entirely. “Pardon the unfortunate pun.”

A version of this story first appeared in the Climate Is Everything newsletter. We’re currently sending a daily email from COP26 in Glasgow, Scotland. To sign up, click here. 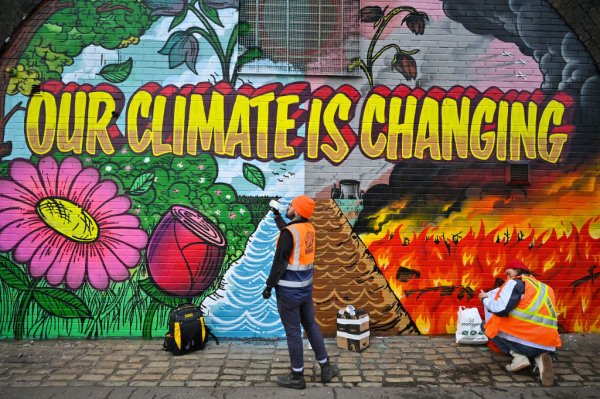 One Big Reason Why COP26 Actually Matters
Next Up: Editor's Pick