Rich Nations to Miss Climate Fund Goal Even by 2025

Developed countries’ pledges to provide $100 billion of annual financing, made over a decade ago and seen as key to unlocking upcoming climate talks, are unlikely to be met even five years after the target, according to a new report.

That not only threatens the success at the United Nations climate talks in Glasgow starting in weeks, but also the aim of limiting global warming to 1.5 degree Celsius as part of the Paris Agreement, Oxfam International said in a study.

“Wealthy nations must live up to their promise made 12 years ago and put their money where their mouths are,” said Nafkote Dabi, global climate policy lead for Oxfam. “It is clearly a question of political will.”

Data from the OECD last week showed that the pace of boosting the funding slowed further in 2019, growing just 2% to $79.6 billion from 2018. Data wasn’t available for 2020, by when the $100 billion annual rate was to be achieved, but the economic damage wreaked by the pandemic means that target was likely missed.

Developing nations say the funding is key for them to pledge deeper emissions cuts. While U.S. climate envoy John Kerry has been criss-crossing the globe in recent weeks, including China and India, seeking to garner enough support to make COP26 that starts Oct. 31 a success, the financing crunch could turn out to be a hurdle.

Oxfam also raised concerns about how the financing will be disbursed to developing nations. Over two-thirds will be in the form of loans, which would put the countries into further debt.

The U.S. is widely seen as having the biggest funding shortfall, in part because former U.S. President Donald Trump pulled the world’s richest polluter out of the Paris deal. Oxfam said France, Australia and Japan have failed to increase their financing for poorer nations.

—With assistance from Jessica Shankleman. 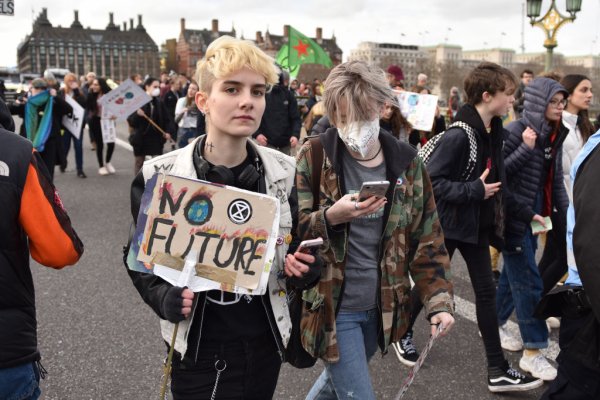 75% of the Young People Around the World are Frightened of the Future Because of Climate Change
Next Up: Editor's Pick