Pablo Larraín’s Spencer, a fantastical imagining of a few fateful days in Princess Diana‘s life, begins with an epigraph that notes the film is “a fable from a true tragedy.” The true tragedy, of course, is the dark story of the late princess’ life, which included a turbulent marriage to Prince Charles, the pressure of being a member of the royal family and facing unrelenting scrutiny from the public and the media.

The film, which stars Kristen Stewart as Diana, speculates on the inner turmoil she may have faced ahead of her separation from Prince Charles in 1992. Set over three days during the 1991 Christmas holidays at the Sandringham, one of the royal family’s country estates, the movie offers a glimpse of Diana’s innermost thoughts and feelings as imagined by Larraín, amid the purported real-life tensions within the royal family and the dissolution of her marriage.

While the film is inspired by real-life figures, longtime rumors and real events, it is still very much a work of fiction, anchored by Larraín’s experimental direction, which includes, among other things, hallucinations and a visit from Anne Boleyn.

The separation of Princess Diana and Prince Charles

The film takes place in 1991, placing it just one year ahead of the time that Diana and Charles formally separated in December 1992. This was eleven years after they wed in 1981; at this point in their marriage, there had been years of rumors and speculation of marital strife, much of which was attributed to Charles’ sustained and longtime affair with his first love, Camilla Parker Bowles.

The painful canker of Charles’ affair is apparent in the film when Diana realizes that the pearl necklace that Charles presents to her at Christmas is the same one that he also gifts to Camilla, a scenario that had actually happened at another time with another piece of jewelry to the real Diana. Another scene in Spencer shows Charles and Diana walking coldly apart from one another after Christmas services, something that actually happened in real life in 1991, sparking more rumors of dissent between the couple.

Holidays with the royal family

In Spencer, when Diana arrives at Sandringham, she is weighed upon arrival, much to her unhappiness (an emotion that colors her entire time at Sandringham. It turns out that weighing themselves before and after the Christmas dinner is a real tradition for the royal family and their guests that dates back to the 1900s, when King Edward VII wanted to ensure that people ate enough during the holidays.

Diana’s discomfort during the holidays was also something that drew from real-life experiences. In a 2020 documentary about holidays with the royals at Sandringham, Diana’s former butler Paul Burrell said that she used to tell him that she was “crawling the walls” by the end of a Sandringham Christmas and “couldn’t wait to escape.” Sandringham was also the site of unhappy memories for Diana: According to Andrew Morton’s 1992 biography, Diana: Her True Story, during Christmas in 1982, she attempted suicide by throwing herself down the stairs at Sandringham because of Charles’ continued affair with Camilla. She was also often overwhelmed by the rigid royal protocol for the holidays, which included numerous outfit changes, which is referenced memorably in the film. Despite her unease during the royal family’s Christmas festivities, Diana continued to attend even after her separation from Charles, for the sake of their children, only skipping Christmas in 1995.

The film doesn’t shy away from showing the sobering realities of Diana’s struggle with the eating disorder bulimia, showing graphic scenes of her bingeing and purging. According to Morton, who allegedly spoke with Diana through secretly recorded tapes, Diana’s eating disorder began the week after she got engaged and continued for nearly a decade. In the book, Diana is quoted as saying it was triggered by a comment from Charles, as well as the stress of his affair.

“My husband put his hand on my waistline and said: ‘Oh, a bit chubby here, aren’t we?’ and that triggered off something in me—and the Camilla thing,” she said.

In the film, Charles makes a loaded comment about Diana’s bulimia, chastising her for wasting food, a sentiment that Diana, in real life, alluded to having heard from people around her, during her famous 1995 Panorama interview with Martin Bashir.

“You have to know that when you have bulimia you’re very ashamed of yourself and you hate yourself,” she said. “And people think you’re wasting food—so you don’t discuss it with people.”

In the film, Diana’s time at Sandringham House in Norfolk during the holidays brings up happy memories from her childhood and of her father, with the princess even visiting Park House, an abandoned residence on the Sandringham estate that once belonged to her family. In reality, Diana was born and lived at Park House until she was 14; in 1983, the Queen offered the house to Leonard Cheshire Disability as a hotel for people with disabilities.

During Spencer, Diana has no qualms about interacting with the staff at the palace, even though there’s a strict code of behavior that staffers follow in front of the royals. In many instances during the film, she actually relies emotionally on some of the staffers, particularly the royal chef, who was based on real-life royal chef, Darren McGrady (played by Sean Harris) and her dresser, Maggie (played by Sally Hawkins).

In the movie, Maggie confesses to Diana that she’s in love with her. While Diana had many dressers in real life who assisted her with personal care and her wardrobe, there is no evidence she had romantic overtures from them. McGrady confirmed in a 2020 documentary about holidays with the royals that Diana liked “to come in for a chat, just sort of walk around the kitchen and see what was going on.” 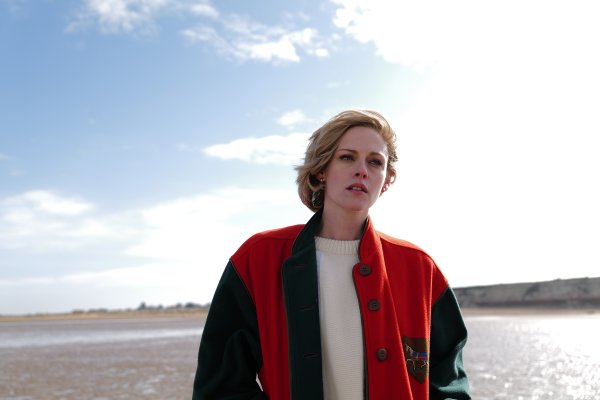 What Princess Diana's Fashion in Spencer Tells Us About the Royal Rebel
Next Up: Editor's Pick