These Tiny Island Nations Are Leading the Fight Against Climate Change

Mohamed Nasheed, former president of the Maldives, talks to journalists after a press conference at the World Climate Summit.
picture alliance—picture alliance via Getty Image
By Justin Worland / Katowice, Poland

The ongoing negotiations on how to implement the Paris Agreement aren’t going well. The world’s largest economies and top greenhouse emitters remain mired in decades-old arguments about who is responsible for addressing climate change and its impacts.

Now, a group of small island nations have stepped in to save themselves.

Countries like Kiribati, Vanuatu and the Marshall Islands aren’t your typical geopolitical movers and shakers, but here at the United Nations climate change conference in Katowice, Poland these highly vulnerable countries have managed to reshape discussions with a simple but poignant reminder: if the world fails to halt global warming they may disappear for good.

“We are not prepared to die, and the Maldives have no intention of dying,” Mohamed Nasheed, the former president of the Maldives told reporters in Poland. “We are going to do everything in our power to keep our heads above the water.”

To do that, these countries have launched a last-minute blitz to rouse higher-emitting and slower-moving countries to action. They are pushing their counterparts to demand a more aggressive agreement in a series of closed-door bilateral discussions. And they’ve launched a messaging campaign to signal that they will not let other countries off the hook if they hold back.

At the heart of it all, they hope that the final deal that emerges from Katowice will recognize the dangers of letting temperatures rise more than 1.5°C and commit countries to announcing new emissions reductions targets by 2020.

The opposition to the 1.5°C target emerged as somewhat of a surprise. At the center of the issue is an October report from the Intergovernmental Panel on Climate Change (IPCC), the UN’s climate science body. Negotiators wanted to endorse the document officially in the decision that emerges from Katowice, but four oil-producing countries, including the U.S. and Saudi Arabia, opposed it.

On a more technical level, vulnerable nations hope for clear rules requiring countries to expand their commitments to reduce greenhouse gas emissions by 2020. Signatories promised to reduce their emissions ahead of the 2015 U.N. climate conference that led to the Paris Agreement, but analysis shows that those pledges will fall far short of what needs to be done to keep temperatures from rising 2°C, much less 1.5°C.

The strategy of highlighting the effects of climate change on the most vulnerable countries has worked in the past. Some nations have already lost islands and begun relocating communities. Across the South Pacific, small island countries are expected to experience the loss of fisheries that drive local economies and ensure food security, coral reefs are expected to die off and rising sea levels and stronger storms will destroy infrastructure and communities. Some countries could literally disappear from maps. “It’s an existential threat,” says Nasheed.

The strategy of highlighting those impacts directly has worked before. In the negotiations that ultimately led to the Paris Agreement, small island states helped build a coalition to make the deal more ambitious. For years, countries had aimed to keep temperatures from rising more than 2°C by 2100. But highly vulnerable countries — mostly tiny small island states situated in remote locations — insisted that temperatures couldn’t rise more than 1.5°C if they hoped to survive.

At first, those countries received little traction, but a shift occurred following a persistent effort from island nations to highlight their plight. Former President of Ireland Mary Robinson, who served as the U.N. special envoy for climate change in 2015, recalls that the dire statements of officials from vulnerable states motivated negotiators who had previously hewed closely to their party lines. “The countries most vulnerable were the countries pleading with the world,” she says.

A push from those countries ultimately persuaded the U.S. to join a “high ambition” coalition in the final days of talks. With the U.S. onboard, negotiators were able to include 1.5°C in the Paris Agreement as an ideal target, which in turn prompted the IPCC to launch a report on the subject that was finally published this year.

“They have been a very important driving force in the process and they continue to do that,” Patricia Espinosa, the head of the UN climate change body, tells TIME. “We are looking at a group that has high moral standing to try to get the most ambitious” outcome.

Since then, the highly vulnerable countries have sought to keep up the momentum. Fiji coordinated a year-long program of open discussion between high-ranking officials from around the world where countries shared their progress and challenges in dealing with climate change. The scheme, known as the Talanoa Dialogue, resulted in a series of meetings around the world that gave countries an up close and personal view of how climate change has already hit home in some places and what countries are doing to address it. “This is not business as usual,” says Luke Daunivalu, Fiji’s chief climate change negotiator. “The Talanoa model has provided a new form of engagement.”

But dynamics have changed a lot since Paris, and it remains unclear whether the existential threat facing some countries will be enough to persuade negotiators whose boss insists on policies that he says will put “America First.” In theory, any country could block a deal its representatives don’t like, though oil-producing petrostates and other foot dragging countries have typically dropped their objections rather than face the ire of the rest of the world.

Still, the U.S. remains an unpredictable force under the direction of the Trump Administration. Trump clearly has no qualms about disappointing the rest of the world and could choose to do so once again — much like he did when he announced that the U.S. would leave the Paris Agreement.

“They may just not be willing to compromise. Full stop,” says Ralph Regenvanu, Foreign Minister of the Pacific nation of Vanatu. “Hopefully not.” 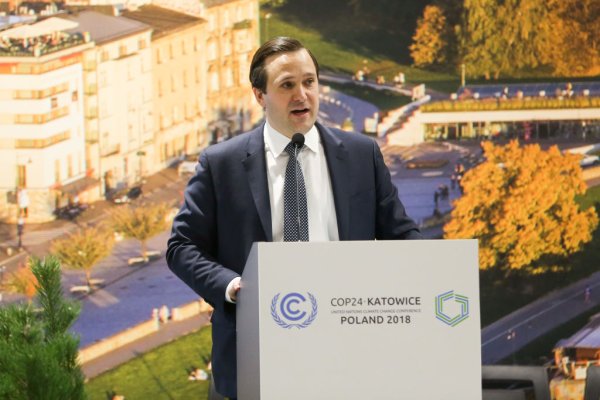