The U.S. Relationship With China Is in Trouble. That's a Challenge for Climate Change

President Barack Obama and Chinese President Xi Jinping at a joint news conference in the Rose Garden at the White House, in Washington, on Sept. 25, 2015.
Doug Mills—The New York Times/Redux
By Justin Worland

As the coronavirus pandemic rages, the Trump administration’s already-rocky relationship with China has deteriorated. President Trump has sought to blame the country for the public health and economic disaster, for a time calling the new coronavirus the “Wuhan virus” or the “Chinese virus,” and as recently as May 7, spreading unsubstantiated claims that the virus emerged from a lab in Wuhan. On May 14, he went so far as to suggest that the U.S. might “cut off the whole relationship.”

The U.S. relationship with China has faced challenges since Xi Jinping took office and moved the country in an increasingly nationalist direction. But, even as the two countries disagreed on a wide range of other issues, they got together to work on climate change during the Obama years. That paved the way for big multilateral breakthroughs to reduce emissions, and helped temper heated relations between the countries in other areas. The Obama White House called climate change a “central pillar of the bilateral relationship between the two countries” at the time. When you see a friendly picture of President Obama and President Xi together, there’s a good chance they were talking about climate.

This relationship not only bore fruit in the fight against climate change in the past, but may be crucial to the future of efforts to tackle emissions. The U.S. and China are the world’s two largest economies and its two largest emitters. If they’re moving in the same direction, and pushing the rest of the world to do the same, it’s still possible for the world to reduce emissions to a level that could keep global temperatures from rising over 1.5°C compared to pre-industrial levels. If they aren’t, unchecked warming starts to look even more certain.

In the 1990s and early 2000s, as global warming became an issue of international concern, the U.S. and China frequently played the role of disruptors in international climate discussions. The U.S. balked at transnational measures that would have committed the country to reducing emissions, arguing that this would mean giving other countries sway over the U.S. domestic economy—a proposition most American politicians fiercely rejected. (In 1997, the U.S. Senate voted 95-0 to declare that the U.S. should reject any measure that would mandate emissions cuts for the U.S. while not mandating similar cuts for developing countries). At the same time, China insisted that, despite its recent economic growth, it shouldn’t be held to the same standard as countries that had been wealthy—and large emitters—for decades. After all, why should China be responsible for fixing a problem it didn’t cause?

With this history in mind, the collaboration between the Obama and Xi governments in the lead up to the Paris Agreement in 2015 was huge. In 2014, Obama and Xi met in Beijing, and the U.S. committed to reduce its emissions by more than quarter by 2025 while China committed to 2030 as the latest its emissions would peak. In 2015, the pair gathered again in Washington, D.C., where, during a visit that included a state dinner, they announced a slew of policies to show how they would meet those goals.

The collaboration paid dividends beyond climate. Obama administration officials and career diplomats alike say that the work on climate change kept the relationship from falling apart amid other disagreements. “Our bilateral understanding on climate helped steady the relationship at a time of turbulence on economic and security issues,” says Paul Bodnar, senior director for energy and climate on Obama’s National Security Council and now a managing director at the Rocky Mountain Institute, a U.S.-based NGO that works on energy and climate.

This had a huge catalytic effect on the climate talks that took place in Paris that December. For the most part, the rest of the world followed suit, with the vast majority of countries committing to their own plans to reduce emissions. And, with the U.S. and China making nice, other countries saw past old divisions. “The U.S.-China relationship was obviously quite central to the years leading up to Paris,” Todd Stern, the chief U.S. climate negotiator during the Obama administration, told me a few years later.

Bodnar suggests that there’s one specific area of collaboration that seems especially relevant right now: the work the two countries did together to help stop the spread of the Ebola virus in 2014.

The texture of the U.S. relationship with China is unlikely to go back to that of the Obama years, no matter who is president after the 2020 elections. Democrats and Republicans alike largely agree that the U.S. needs an aggressive posture to take on China, with officials on both sides of the aisle upset at the country’s weak protection of intellectual property, inhumane treatment of the country’s Uyghur population and its aggressive posture towards Taiwan and Hong Kong. Increasingly, U.S. legislators have support in this thinking from key allies in Europe and elsewhere.

And meanwhile, China’s increasing isolation presents a challenge for international climate efforts. China is the world’s largest greenhouse-gas emitter and second-largest economy. While it has invested heavily in becoming the world’s leading manufacturer of green technology, and is on track to exceed its commitments under the Paris Agreement, it continues to build heavy-polluting industrial facilities at home and to finance such projects abroad.

China will keep moving on green energy for competitive purposes, but a look at the global emissions trajectory suggests that’s not enough for the world to stem temperature rise. One avenue to encourage China to move more aggressively to slow its emissions, international climate experts say, is for other countries to push it to change its trajectory, either through a revival of collaborative efforts with the U.S. or new competitive engagement where countries are competing to capture the green economy.

In recent years, the European Union was seen as a likely contender to fill the collaborator shoes the U.S. has recently left unoccupied. Before the coronavirus pandemic struck, China and the EU were planning a big summit this fall that climate advocates hoped would lead to new collaborative commitments, which in turn would set the table for a significant United Nations climate conference in November. The climate conference has been postponed, and the likelihood of a big climate win out of the EU-China summit seems increasingly distant as tensions remain high, though it’s still possible that they could use the opportunity to commit to new climate initiatives.

Still, even as Trump has eroded his country’s standing in the world, there’s no match for the geopolitical might of the U.S. Under Trump, it’s hard to imagine the U.S. government making any real constructive moves on climate, let alone a collaboration with China on the issue. But Democratic presidential hopeful Joe Biden has vowed to reengage the world, and has made climate diplomacy a key part of his climate plan.

It’s also possible that a new administration in the U.S. could push China on climate even without such collaboration. Some climate experts and policymakers would like to see a robust competition emerge between the two countries on clean energy. China already leads the world in everything from solar-panel manufacturing to electric-vehicle production. The U.S. needs to invest so as not to cede the 21st century decarbonized economy to China, experts argue, and a green arms race, so to speak, would push both countries to move quicker.

Representative Ro Khanna, a California Democrat, framed it to me last year as a question: “How can you believe China’s the biggest strategic threat and then let them become the OPEC of the 21st century on new energy?” It’s a great point—but one that becomes null and void if the president doesn’t accept the science of climate change. 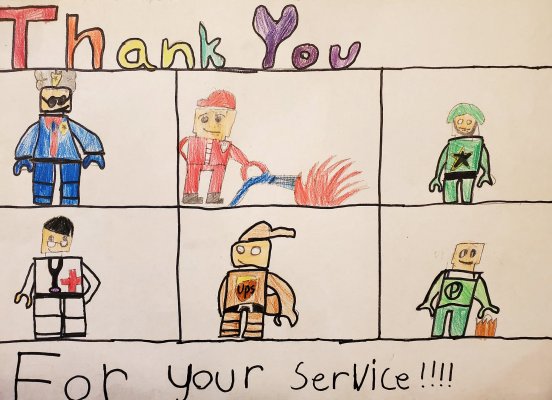 How Kids Are Feeling About the COVID-19 Pandemic, in Their Own Words
Next Up: Editor's Pick